Beijing caught with its hands in the cookie jar! Pardon me for doubling up with laughter. 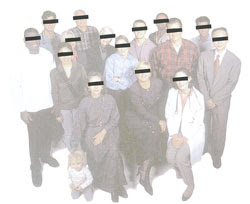 [W]e impatiently await India's first luncheon at the G7/8 meeting. Yes, India has finally received an invitation to the lunch. If memory serves, this will be China's second lunch. Pundita can't wait for the Chinese and Indian delegations to arrive. It's going to be music to hear the anti-globalist protesters yelling, "Stop robbing the poor!" at the Chinese and Indians sneaking in the back entrance to the luncheon.

-- from We're so glad you enjoyed the G8 luncheon, India and China! With wine and tip that comes to 5 billion dollars; Pundita, March 2005.

In late 2006, after Beijing rolled out $5 billion in concessionary loans to Africa, a colleague who wasn't happy about China's growing influence in the continent and who'd read the above post told me in amusement, "Now look at what you've done. Will you shut up."

I was having too much fun needling the Chinese about their 'We just poor developing country' comedy routine to shut up. China's government had been playing a double game -- insisting on being treated as a first world nation when it suited them, retreating into second- or third-world nation status when it didn't.

Beijing's response to such complaints was to start a campaign to downplay the differences between first, second, and third world categories.

Yet China's double game meant it was taking more from the aid- and soft-loan cookie jar than it was entitled to. That was helping Beijing come up with money to play at being a major power -- much in the way Pakistan has been able to punch above its weight in South Asia by extorting money from the USA and other Western countries to finance its military and WMD buildup.

All this explains why'd I'm breaking radio silence to pass along the following report, which caused me so much laughter I had to breathe into a paper bag to get control of my mirth.

Why did it take the international community so long to discover there was gambling in Casablanca? In years past I played the fool by giving detailed replies to the question, as if the questioners were actually interested in knowing the answer. Today, with my patience snapped, I just reply, "Because you've preferred to be studiously blind."

LONDON - As China basks in international praise for its spectacular economic transformation over the past 30 years, some shadow sides of this story of triumph have begun to emerge.

The world's second-largest economy has been accused of exploiting its status of a populous developing country to claim grants and aid that would have served poorer countries better. And as it continues to receive millions of euros in aid from the European Union, China has stepped up its own foreign aid activities in African and Latin American countries in order to bolster its long-term economic interests and secure energy and mineral resources.

China surpassed Japan as the world's second-largest economy last quarter, crowning the nation's three-decade rise from communist isolation to emerging superpower. The country led the world out of the 2008 global recession with an economy last year that is more than 90 times bigger than when market reform architect Deng Xiaoping abandoned communist policies in 1978. Experts predict that after unseating Japan and passing Germany, France and Britain in recent years China will overtake the United States as the world's largest economy as early as 2030.

World Bank Group president Robert Zoellick praised China's 30-year-long journey as a worthy lesson in helping the world overcome poverty. Speaking in Beijing on September 15 to mark the 30th anniversary of the China-World Bank relationship, Zoellick said that between 1981 and 2004, China succeeded in lifting more than half a billion people out of extreme poverty. "This is certainly the greatest leap to overcome poverty in history. We and the world have much to learn from this," he said.

But China's spectacular transformation has been drawing ever more scrutiny. The country has been accused of aggressively pursuing grants to fight AIDS, malaria and tuberculosis, and receiving more money than severely deprived African nations.

A former official at the Global Fund to Fight AIDS, Tuberculosis and Malaria has disclosed that China was given three times as much to fight AIDS and malaria than South Africa, one of the worst-affected countries. Despite reporting only 38 deaths from malaria last year, China has won malaria grants totaling US$149 million or more than the Democratic Republic of Congo, which reported nearly 25,000 malaria deaths in the same period.

"We imagined the bulk of the money ending up in places like Lesotho, Haiti and Uganda, where these three diseases have reached crisis levels," Jack Chow, the lead US negotiator in the founding of the Global Fund wrote in the Foreign Policy Magazine. "So it might surprise and concern you - as much as it still does me - to learn that one of the top grant recipients isn't in sub-Saharan Africa, Latin America, or impoverished Central Asia. It's a country with $2.5 trillion in foreign currency reserves: China."

China's huge population means that its per capita income, held as the key criteria in assessing grants, places the country on the level of impoverished nations like Cameroon and Bolivia. According to Chow, China had "exploited" the Global Fund's set-up to win more aid grants than 29 African countries.

China's leap into becoming a global economic powerhouse has not translated yet into significantly increased contributions to the Fund. Over the eight years since the Global Fund was launched, China has made contributions of $16 million s but has been awarded $1 billion in grants. By comparison, the United States has committed $6.5 billion and France has offered $2.5 billion over the same period.

European countries are now increasingly calling on China to play its part in addressing international challenges. The UK government has halted aid to China and has urged the European Union to reconsider sending hundreds of millions of euros in aid to the world's largest exporter.

"UK money should be spent helping the poorest people in the poorest countries," Andrew Mitchell, the International Development Secretary said in June when he announced Britain was going to stop giving aid to China.

"I understand these new concerns very well," says Ding Xueliang, political scientist at the Hong Kong University of Science and Technology. "In the past few years China has shown to the world how much money its government has: by staging the Beijing Olympics and the Shanghai Expo one after the other. My prediction is that many foreign donors will go in the direction of the UK government."

The EU has been criticized for spending millions in emerging economies that now compete with the EU and individual member states in many areas instead of directing its efforts to impoverished countries in real need.

China has stunned Western powers with its aid largesse and aggressive infrastructure investment in Africa, Asia and Latin America, where it vies with the West for influence and resources.

In Africa alone, China's commitments for infrastructure rose to $7 billion in 2007 from less than $1 billion per year before 2003, according to the World Bank. By the end of 2009, the volume of China's accumulative non-financial investment in African countries had surpassed $8 billion (Chinese government figures) and it had become the largest investor in the continent among developing nations.

Ding has a word of caution. "In China there is a very popular saying these days, which translated means 'rich government, poor people'. One should remember that even at the height of the Great Leap Forward in the 1960s, when millions of Chinese people were dying of hunger, Mao Zedong sent enormous amounts of military and economic aid to many countries around the world."