Pundita falls in love with a Pakistani attorney. I hope his goats and cousins don't mind. (UPDATED 2:00 PM)

UPDATE
Crikey! The guy has a fan club. Received the following from a reader whose opinion I respect. Glad to see from his note that my snap judgment in this case was sound. And it seems the blogger in question is a male whose name, or at least pen name, might actually be Major:


"Falling in love" isn't just a manner of speaking when it comes to the Major. It's funny how disproportionately many mash notes he gets from both boys & girls in his blog posts. For desis [South Asians] his pitch-perfect sendup of our accents and locution is an added treat. Personally, I hate the fellow's guts, since he writes the way I can only fantasize about. :-)

The lad's a genius, and that's all there's to it. 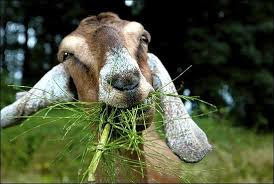 I might regret this, but on the strength of only two of his essays (Strapping the suicide vest on the Kashmir issue and Birth of a Liberal Pakistan!! (approximately after 70 years of screwing) I'm placing an anonymous Pakistani's blog on the Pundita blogroll. I hope he'll use the sudden fame wisely. (In what may be a sign of lurking gender bias this female blogger assumes the blogger is male.)

Thanks to the same reader who sent a link to Margaret Bourke-White's report on Pakistan (see today's earlier post) for alerting me to the blog, which is titled Major Bearls Oph Wisdom: Goat droppings oph Wisdom.

All I've gleaned about the blog's author is that he seems to be a Pakistani attorney who lives in Pakistan. An anonymous blogger myself, I'm not irritated by his blog's completely uninformative "About" section:


Some post are by me, and some posts are the commentaries of my fourth cousin thrice remove (twice by ISI and once by CIA). ...

Don't let the botched English fool you; this is a brilliant and well-informed thinker, an intellectually honest one as a commenter notes, with an excellent command of English.

Any fool can be well informed and brilliant, although I'll grant that intellectual honesty is harder to come by; what sets Pearls apart is the author's stealth sense of humor, which he uses to laugh absurd arguments to death.

I'm on the fence about trying to entice you to read Pearls by providing quotes from the author's essays. I don't want to spoil your fun (although I'd advise Americans to read Birth of a Liberal Pakistan first). And I don't want to scare off American opinion experts on Pakistan, who find themselves at sea with arguments that are shorn of political and strategic agendas.

The only agenda I can see about the blog is that the author is trying to bring Pakistan's intellectuals to their senses. I add that the author's agenda could work wonders for the Pentagon, U.S. Department of State, Congress and White House, but I've concluded that Washington has no interest in being sensible about Pakistan. The same observation goes double for the other powerful members of NATO.

On a personal note, reading the Pearls essays was therapeutic for me. I've been accused of having a good sense of humor but there's nothing like realizing that one's government is paying another to bump off soldiers in one's military to turn humor into corrosive bitterness. At least that's been my experience.

Reading Pearls sharply reminded me that I'm not the only person taking full account of evil and stupidity run riot, and that I need to find ways to get across my points other than sputtering to my fellow Americans that we're all going straight to hell.

That I need to find other ways doesn't mean I will; the New Year has done little to lift my dark mood. But Pearls has struck a match in the darkness.

Okay; here are a few lines from Birth of a Liberal Pakistan !! in which the author skewers laments by Pakistan's self-proclaimed liberals that Salmaan Taseer's killing represented the death of liberalism in Pakistan. He drives home his argument by pointing out that Pakistan's liberals have never had much to say about Pakistan's bonded laborers:


[...] Salman’s taseer assassination, wimmens and gentlemards, heralds the arrival of an egalitarian Pakistan!

Here is why. Liberalism, wimmens and gentlemards, is a belief in social justice rooted in individual liberty and equal rights. So how did social justice and equal rights prevalent before Salman Taseer’s assassination die on that day? Actually it didnt. Before going back to the begining, for dramatic effect let me start with the end. The day Salman taseer got assasinated, the elite suddenly realized that they cannot do what they wished, such as down a few or have their way with the blasphemy law, without the danger of their incensed security guard or domestic help firing off a clip in their direction. This, I suspect, the aforementioned muddle headed donkey has mistaken for the death of “liberalism”. What has instead died, I humbly submit, is the power over the common man which was usurped and weilded for so long by the elites.

A round of applause for AK-facilitated egalitarianism!!

So what of this elusive little-understood animal (like the Yeti and “Silent Majority” of Pakistan) called Liberalism? More importantly what is and why Liberalism? Liberalism wimmens and gentlemards, among other things, is to ensure social mobility and equal participation in governance. And social mobility in yesteryears depended on access to capital producing goods. Like Land. Ergo, if Liberalism had existed before Salman Taseer’s assasination, Land reforms would have been implmented. Pray tell me how did that go? As you would have guessed:

Fantastically!! We had the Provincial Tenancy Act of 1950!!

Since yours sachly fancies himself as a story teller more than a lawyer (and is allergic to the word “WHEREAS” in all caps that every legal document seems to have) instead of describing the law, let me tell you a story. There are 1.7 million landless agricultural workers in Pakistan and in January 2002 The honorable High court of Sindh dismissed petitions for the release of bonded laborers citing this very same act and declaring bonded laborers to be a “dispute” between Landlords and peasants. Covered by the Tenancy act. So much for equal rights and social mobility based on capital producing goods. So, did the “liberalism” enabled by tenancy act die with Salman Taseer’s assassination?

Did the egalitarianism of the threat of a few peasants banding together, declaring their landlord to be a blasphemer and shooting him in the head become a real possibility after Salman Taseer’s assasination?

So wimmens and gentlemards, I submit that egalitarianism has taken birth!!

Let us take the second aspect of social mobility. Education. The less said about this, the better.
[...]

By the way, you ought to read Bruce Reidel's latest at Brookings. The interview. Your head will ache, however, dear Pundita. A real migraine-y headache.

Whoa!! A wimmens falls in love with moi? And my blog is on her blogrol?!

Let us not, to the marrij of two blogs, admit impediments // A post is not a post that alters when its alterashun finds.

Welcome to Punditaland, Major. Madhu is also smitten with you, as you can see by her comment here. She blogs these days at Chicago Boyz.

Most excellent. Will read your latest with close attention. Right now I am writing part two of my post titled "The Ghost," which refers to Pakistan as the ghost of the British empire.

Pundita said...
This comment has been removed by the author.
02:16

You might be shocked to know the real identity of Major Butt.He is not a Paki attorney but a retired fauji afsar.

The Pakistan Army is not so bad after all.

Whoa! Several legends exist about yours sachly, but all of them are false!!

Major - It's grand to hear from you, and particularly at this moment. It's been a respite to read your comment here, and then catch up with your social experiment, which seems to have greatly exercised Pakistan's literati.

I'm also glad to see you found the latest comment at this post and replied. I'd had meant to reply to Mango that naming an anonymous blogger's identity is to be taken with a grain of salt, as was my guess that you're an attorney by vocation. And given your riotous sense of humor I was cautious about leaping to conclusions from your "Major. Butt (Retd) Strategic Analijit, Jernailist" screen name.

But when Mango's comment arrived, which was on Feb 3, I was still in the midst of cramming on the background to the protests in Egypt and closely following every bit of breaking news from Egypt.

My dear Mango, the German army under Hitler was not so bad, either. There were many ethical German officers who realized in horror that Nazi policies were an atrocity and the SS was a bunch of thugs. Some of those officers put their lives on the line to mount plots to kill Hitler in a desperate attempt to halt the Third Reich in its tracks. And yet such actions could not halt the rot in the system the officers served.

In a civil society those who make the military their career are held to a higher standard of ethics because of the gravest of responsibilities they carry. Thus, it's never enough for such officers to be a great solider and a decent human -- a point I made in my November 2009 essay, "Why Stanley McChrystal is going straight to hell," and which I've continued to make since in ever stronger terms on this blog.

In my view, once the system an officer serves is showing rot, there really is no ethical option for him, at least in a democracy where a civilian government is in control of the military, but to resign his command in protest. Yet I understand that facing such a decision presents him with the most profound ethical dilemma.

Gen. Stan might have resolved the dilemma for himself by shooting off his mouth in front of a journalist he knew worked for a leftist, anti-war publication. And in his new career, that of a Yale professor, he's impressing on his students that many of America's worst defense problems today were created by earlier U.S. policies.

It's a point I made when I observed that Americans are the only people who whap themselves on the back of the head than yelp, 'Who hit me?' If a decorated soldier who's unquestionably a great patriot is pounding home the same point in an Ivy League setting, there's a ray of hope for a future generation of American policymakers.

In any event it's a sign the system is full of rot when officers send soldiers into battle while knowing their government is in effect paying another military to help kill the same soldiers. That's happened in Afghanistan.

It's possible that the Pentagon has finally awakened to the worst consequences of the rot, given the latest reported turn of events, but I'll know more when I return my attention to Afghanistan.

As for Pakistan -- it's a sign of rot when, decade in and decade out, billions in hard currency are diverted from the task of forging a nation out a collection of clans into schemes to make India miserable. It doesn't get more self-destructive than that. Yet it doesn't matter how many officers in Pakistan's military might have come to the same conclusion; what matters is what they do with the conclusion -- or whether they can do anything beyond resigning in protest.

Major's URL on your blogroll is malformed.

Major taking to twitter & blog is the best thing to have happened to Pingrezi BENIS-speak, otherwise spoken for years only amongst members of a particular forum.

All powers to Major, oph LMU phaculty fame, in spreading the bojitive neuj about Bakistan & holding up a mirror to them in manner only Pingrezi can achieve.

Shubhankar -- Thank you for letting me know; I've fixed the url.