UPDATE September 10, 10:40 PM EDT
From a CNN report published at 8:54 EDT tonight (Angry crowd turns on journalists reporting embassy attack in Egypt), journalist Mohamed Fadel Fahmy is "a producer working for CNN." So this corrects my original guess that he was an independent reporter. (See the post below.) I note from the CNN report above that he is a producer who risked his life to save a female reporter who was being trampled by a furious mob.
UPDATE September 10, 5:00 AM EDT
1. The Associated Press photo featured in the discussion below, showing a fire/fires outside the Israeli embassy, was indeed taken during the Friday attack on the Israeli embassy. Here are two other AP photos of the same incident from a nine-photo galley of the unrest in Cairo on Friday. The fires seem to be from torched vehicles. (Google hosted website link):


A protester holds the Egyptian national flag as a fire rages outside the building housing the Israeli embassy in Cairo, Egypt, Friday, Sept. 9, 2011. Hundreds of Egyptian protesters, some swinging hammers and others using their bare hands, tore down parts of a graffiti-covered security wall outside the Israeli embassy in Cairo on Friday. Thousands elsewhere protested for the first time in a month against the country's military rulers. (AP Photo)

A second photo from the gallery that shows fire:

2. The AC-360 CNN news show made no mention of Friday's unrest in Egypt nor of the attack on the Israeli embassy, not even during the news break at the bottom of the hour, and even though the news featured an update on the unrest in Syria and Libya. This doesn't mean the attack wasn't mentioned earlier during CNN's news broadcasts, but that all mention was omitted from AC-360 suggests the Obama White House/State Department were struggling at the time of the broadcast with how they wanted the unrest/attack on the embassy to be framed.

A potentially serious issue that's been building since Thursday in Egypt is that the government has stopped foreigners from being able to purchase visas when they arrive in the country (see report below); there's confusion about the ruling, which government authority imposed it and why.

In short, the situation behind Friday's unrest might be more serious than the Obama administration wanted to acknowledge last night and/or it was still collecting intelligence on the fast-moving and chaotic events on Friday and their implications. 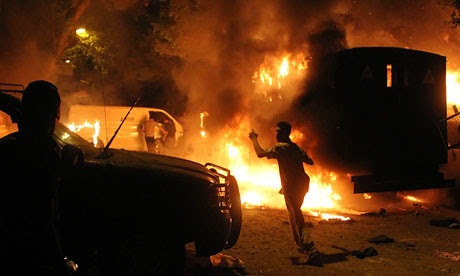 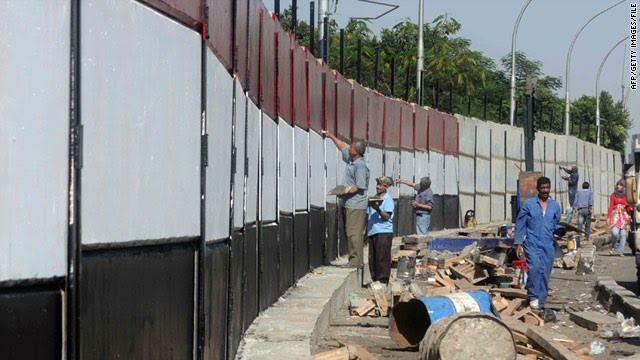 It goes without saying that the AP photo gives a very different impression of the attack on the Israeli embassy than the CNN one. And the "File picture" caption for the CNN photo suggests it could have been taken after the last riot against the Israeli embassy.

Is it possible that the AP photo is also from an earlier riot at the embassy? From Bikya Masr's September 9 report (no time stamp) filed by Joseph Mayton, Egyptians storm Israel Embassy archives, documents fly out window (emphasis mine):


CAIRO: After knocking down the wall aimed at securing the Israeli Embassy building in Giza, Egyptian activists stormed the embassy’s archives late on Friday night and sent documents flying out the window. One image shows the embassy, or an archive apartment, on a high floor of the building, in flames.

It is unclear what exactly is happening, but reports from the area indicate the embassy has been breached and Egyptian protesters are destroying the place.[...]

I don't think the Guardian would deliberately publish an old photo, and while mistakes can happen in publishing, from the Bikya Masr report it seems a fire was set.

All else I can glean is that while there is no byline on the AP report (a common occurrence, particuarly when another news organization is posting a newswire's report), I know that Hamza Hendawi is the Cairo Bureau Chief for AP. I consider Hendawi's reports on the Cairo protests that brought down Hosni Mubarak's government to be the most informative and accurate of all the mainstream reporting on the situation.

The above-mentioned CNN report is bylined "From Mohamed Fadel Fahmy, For CNN." From a Google search Fahmy is described as a Cairo-based journalist, which suggests he is an independent reporter, or at least not a CNN employee.

Is there any significant difference between the AP and CNN reports that are published with the photos?


Egyptians have been angry about the killing of police officers by Israeli soldiers last month when Israel went after militants who had attacked civilians near the Israeli-Egyptian border.

There are additional less obvious differences in the two reports, but I'd say there's the answer.


Confusion as Egypt says no visas on arrival

CAIRO: In the past 24 hours, foreign nationals living in Egypt have become increasingly concerned over the reports that the Egyptian government has ended the ability to purchase a visa upon arrival in the country. It comes on the heels of reports of visa extensions also being turned down in recent months.

Despite the reports, Egyptian consulates and embassies across the globe appear to know little to nothing about the new restrictions.[...]

See the rest of Mayton's investigative report on the situation.


The Israeli ambassador to Egypt has flown out of Cairo, a few hours after demonstrators stormed the Israeli embassy.

Yitzhak Levanon boarded a plane before dawn on Saturday morning.

Egyptian protesters stormed the embassy on Friday, destroying a part of a barricade wall around the building in the process.

Egyptian police used tear gas to disperse the crowd, and one person reportedly died due to asphyxiation after inhaling tear gas.

A protester tore down the Israeli flag at the embassy, to the cheers of thousands of demonstrators on the scene.

In addition, tens of thousands of Egyptians once again gathered at the iconic Liberation Square in Cairo to demand that the military government hand over power to a civilian administration. The protesters gathered in the square after Friday prayers to participate in the "Correcting the Path" demonstration.

I can't wait to see what CNN's AC-360 show will report tonight on the situation in Egypt. Given all that CNN did to promote Egypt's 'revolution,' I am very interested to see what they will have to say about the big breaking news from Cairo.
Posted by Pundita at 9/09/2011 08:03:00 PM