March 1 UPDATE - 1:20 PM EST
That storm was no joke. A national emergency has been declared in France. Weak sea walls dating back to Napoleon's time are being blamed for the disasters in France's Atlantic coast regions of Vendee and Charente-Maritime. See this BBC report published at noon today EST.
**************************
What next? A blizzard in Egypt? 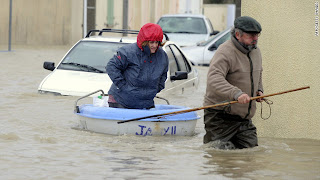 From Wikipedia and AP reports: The storm was described by France's civil defense as the most violent since since 1999. Many of the victims in France died from drowning in flash floods. Rivers overflowed their banks in Brittany, while high tides and enormous waves swamped Atlantic Ocean communities.

"It's a national catastrophe," Fillon said in a brief news conference. "Many people drowned, surprised by the rapid rise of the water."

The departments of Vendee and Charente-Maritime, on the French coast west of Paris, had severe flooding flooding when the strong winds whipped up the water at high tide.

"At 3 o'clock in the morning, we heard the toilets backing up. We got up to look and then we saw 80 cm (about 31 inches) of water in the garage," a resident of Aiguillon-Sur-Mer, in the department of Vendee, told CNN affiliate BFM. "It was rushing in, it broke down the walls around the garden and the gate."

The high winds -- at times spiking to 200 km/h (124 mph) -- reached inland as far as Paris, where as many as 100 flights were canceled at the Paris-Charles de Gaulle International Airport, BFM reported.

At least 17 provinces were on high alert due to the strong winds, CNN+ reported, and some flights and train services were canceled.

A 10-year-old child was killed by a falling tree in the high winds in Portugal, Patricia Gaspar, National Operations Assistant with the Portuguese National Authority for Civil Protection, confirmed to CNN.

There are also some power outages in the country, Gaspar said. Some residents have reported roofs blown off and smaller houses collapsing, she added.

One man was killed in southwestern Germany when a tree fell on his car, local police said. The man's wife was seriously injured.

The storm also reached England, where one woman was reported dead when the vehicle she was driving became submerged and washed down a swollen creek in the northeastern part of the country. [...]

CNN's Per Nyberg in London, England, contributed to this report.