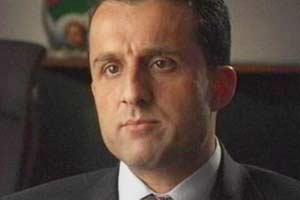 More highlights from the interview:

... Amrullah Saleh compared the Taleban to Cambodia's Khmer Rouge and accused the government of being "ultra soft" on the brutal, mediaeval insurgents.

"These soft policies have demoralised the people of Afghanistan and it portrays the Taleban as the only winning side," Mr Saleh said ...

Many of Mr Karzai's former allies, particularly those from the north, have begun distancing themselves from the government and their rhetoric has grown increasingly warlike. ...

"The black curtain which was rolled back after 9/11 is spreading again," Mr Saleh said. "For Nato it is a matter of some casualties, resources, public opinion, their global agenda. For us it is a matter of our very practical life: It is our honour, our dignity, our history, our values, it is our very basic right of life, which needs to be defended."

The former US Ambassador to India, Robert Blackwill, has led calls to partition Afghanistan, with an independent, ethnically Pashtun-dominated south - where the insurgency is currently strongest - and a northern and western section of mostly Tajiks, Uzbeks, and Hazaras.

Asked if he thought partition was a possibility, Mr Saleh said he had been "approached by those who think out of the box". "My answer is this," he said. "The very survival of our nation is now a priority."

Washington has said it supports talks with insurgents prepared to accept the constitution and renounce ties to al-Qaeda.

"As far as I understand the Taleban at leadership level are not different from al-Qaeda," Mr Saleh said. "The Taleban at grass roots level, yes. They are not directly linked to al-Qaeda. If we create a political context for grassroots Taleban, for community Taleban, for provincial Taleban, I am not against that. What I am against is sending an airplane to the Quetta Shura [in Pakistan] and bringing them to Kabul as national leaders."

Mr Saleh has long been an outspoken critic of Pakistan's Intelligence Service (ISI), which he insists finances and directs terrorist attacks inside Afghanistan.

"The threat is Taleban, al-Qaeda, Pakistan," he said. Without more "kitchen work" to lay the foundations for successful talks he warned reconciliation would be a disaster because "you actually speak to a Pakistani Colonel, not to an Afghan Mullah".

"I am not anti-peace and I am not anti-reconciliation," he said. "I am against the way it is being formulated today.

Meanwhile, General David Petraeus and Defense Secretary Robert Gates have talked themselves into a corner. After selling the idea to President Obama and everyone else that the Taliban attacks in Afghanistan represented an insurgency, they can't scrap the counterinsurgency battle plan -- even through they're facing an old-fashioned proxy war, run from Rawalpindi.

Meanwhile, Karzai gave out the names of the 68 people he appointed to a "High Peace Council" tasked to negotiate a peace settlement with the Taliban. Jerome Starkey's report for today mentions that the list of names "includes warlords, a former civil war president, at least two well-known opium barons and just eight women" and his report yesterday observed:

... Names on the High Peace Council list included the warlord Ismail Khan, a former governor of Helmand province, who was fired after nine tonnes of opium were discovered in his house, and Mr Karzai's 2009 election campaign manager.

"Many of these men are unlikely peacemakers", said Rachel Reid from Human Rights Watch. "There are too many names here that Afghans will associate with war crimes, warlordism and corruption."

A spokesman for the Taleban, Zabiullah Mujahid, said the men were mostly national traitors who "have drunk the blood of Afghan people."

It's a shame Terry Southern isn't alive. After studying the Afghanistan War he would have written a movie script that made "Dr Strangelove" look sane.

Yet all the madness would vanish like fog in the noonday sun if Washington and the other major members of ISAF would do something called "focus:" transfer to Afghanistan the attention they've lavished on Saudi Arabia and Pakistan and a thousand other situations.

The answer would be, 'Oh no no no we need Saudi Arabia for dealing with Iran and we can't let Pakistan go over the cliff and we have to answer to the voters and --"

To which I'd reply, 'Take Ritalin for a couple weeks then call me in the morning.'