A social revolution, driven by cell phones and cheap portable energy technologies, has been taking place in the world's most remote rural regions and with the African continent in the lead.

In Africa the revolution started about a decade ago with the discovery by a few African entrepreneurs that the cell phone was much more than a thing for talking with people across distances: it could also be used as a bank and a market-maker for farmers.

The discovery spread like wildfire and created a new service industry in Africa. What happened next was so astonishing, and happened with such speed, that in July 2006, when Kevin Sullivan summarized the progress of the revolution for The Washington Post, I felt compelled to warn Pundita readers, and myself, against irrational exuberance. (Interpreting Africa news: neither sing nor cry.)

But those of us who were familiar with the ponderous attempts during the latter half of the 20th Century to modernize Africa by recreating the path of the West's development found it hard not to burst into song about the cell phone revolution. We were looking at the prospect that Africa was poised to simply vault over the centuries of Western development.

The second phase of the revolution followed in natural fashion from the first: Once rural Africans who lived away from their nations' electrical grid found the cell phone to be indispensable, they began casting around for ways to circumvent the long commutes to an electricity source to get their cell phone recharged. Voilà, the galloping popularity of the single solar panel! On December 24, 2010, The New York Times summarized the phenomenon and its impact:

KIPTUSURI, Kenya — For Sara Ruto, the desperate yearning for electricity began last year with the purchase of her first cellphone, a lifeline for receiving small money transfers, contacting relatives in the city or checking chicken prices at the nearest market.

Charging the phone was no simple matter in this farming village far from Kenya’s electric grid.

Every week, Ms. Ruto walked two miles to hire a motorcycle taxi for the three-hour ride to Mogotio, the nearest town with electricity. There, she dropped off her cellphone at a store that recharges phones for 30 cents. Yet the service was in such demand that she had to leave it behind for three full days before returning.

That wearying routine ended in February when the family sold some animals to buy a small Chinese-made solar power system for about $80. Now balanced precariously atop their tin roof, a lone solar panel provides enough electricity to charge the phone and run four bright overhead lights with switches.

“My main motivation was the phone, but this has changed so many other things,” Ms. Ruto said on a recent evening as she relaxed on a bench in the mud-walled shack she shares with her husband and six children.

As small-scale renewable energy becomes cheaper, more reliable and more efficient, it is providing the first drops of modern power to people who live far from slow-growing electricity grids and fuel pipelines in developing countries. Although dwarfed by the big renewable energy projects that many industrialized countries are embracing to rein in greenhouse gas emissions, these tiny systems are playing an epic, transformative role.

Since Ms. Ruto hooked up the system, her teenagers’ grades have improved because they have light for studying. The toddlers no longer risk burns from the smoky kerosene lamp. And each month, she saves $15 in kerosene and battery costs — and the $20 she used to spend on travel.

In fact, neighbors now pay her 20 cents to charge their phones, although that business may soon evaporate: 63 families in Kiptusuri have recently installed their own solar power systems.

African nations aren't the only places where the single-solar panel source for electrification has caught on; Rosenthal mentions that there are yurts in inner Mongolia that feature solar cells on the roof. But the African continent's huge number of farmers who live far from a central power grid is making the continent the proving ground for micro electrification projects of all kinds, including the single solar panel.

There are obstacles in the way of large-scale implementation of the projects, as Rosenthal's report goes on to detail. But she also notes that there's so much money to be made in Africa from 'off-the-grid' electrification projects that the projects are attracting interest from deep-pockets investors.

And looking beyond the micro projects, which include technologies such as using rice husks to generate small-scale electrification projects (see Rosenthal's report), there is the fact that all of Africa is one big renewable power-generating source. From Wikipedia's article Renewable Energy in Africa:

Many African countries receive on average 325 days per year of bright sunlight. This gives solar power the potential to bring energy to virtually any location in Africa without the need for expensive large-scale grid level infrastructure developments.

The distribution of solar resources across Africa is fairly uniform, with more than 80 percent of their landscape receiving almost 2000 kW·h per square meter per year. A recent study indicates that a solar generating facility covering just 0.3% of the area comprising North Africa could supply all of the energy required by the European Union.

The same article also summarizes the situation for Africans:

Approximately one-third of the estimated 1.6 billion people living without access to electricity worldwide live in Africa. It is estimated that, with the exception of Libya, South Africa and Egypt, the majority of African countries are only able to provide direct access to electricity to 20% of their peoples. This number is as low as 5% in some countries. Most of the existing power plants and transmission equipment were constructed in the 1950s and 1960s, and in the absence of proper maintenance have deteriorated over the last several decades; the degradation has forced many utilities to operate at small fractions of their installed capacity.

Theft has also played a role in degrading electricity service delivered from central power sources, as the Wikipedia article on rural electrification underscores in its discussion of India:

400 million Indians have no access to electricity. The problem is not one of distribution, but of provision. Many people attempt to steal electric power. The electric company then responds with punitive "tampering tariffs" that require payment for all the electricity that the fraudulent connections and meters might have stolen. These very high tariffs are unaffordable and so resisted by all but the wealthiest users.

The result is that the underfunded electric power company reduces service to the amount of electricity it can afford to produce. The electric companies therefore also prefer to serve large institutional customers that pay their bills.

Development in cheap solar technology is considered as a potential alternative that allows an electricity infrastructure comprising of a network of local-grid clusters with distributed electricity generation. That could allow bypassing, or at least relieving the need of installing expensive, and lossy, long-distance centralised power delivery systems and yet bring cheap electricity to the masses.

The government has proposed legislation to have village leaders operate local generators run from biomass (see links). Locally-controlled generation is preferable to distant generation because the fuel, billing and controls for the generator will then be controlled by the villagers themselves, and they are thought more likely to come to an equitable arrangement among themselves.

However, there is doubt that villagers can run such an installation.

That last statement reminds me of a cartoon that shows big-city Indian computer programmers dumbing down an explanation of how to use the internet for a group of villagers and getting bombarded with sophisticated tecchie questions in reply. See the rest of Rosenthal's report for more indications that villagers can indeed run such installations.

Maybe ten years many villages couldn't have run the installations, just as bringing the internet to remote villages, even five years ago, presented the kind of education challenge that the cartoon alluded to. But the snowballing use of the cell phone, which even in the West is rapidly replacing the desktop and the laptop computer, means that villagers become familiar with the basic concepts of the internet via the cell phone.

With familiarity has come awareness that with the internet you're always only a few keystrokes or text messages away from someone in the world who can help you figure out the diagram for hooking up a solar panel or what went wrong with your village's biomass conversion contraption.

The wet blankets will ask how long before the scoundrels screw up the revolution. There have already been debasements of the technologies; Sullivan's 2006 report noted:

Cellphones have also created a new kind of corruption in a country [Congo] rife with it: People here tell of government officials demanding bribes in the form of airtime transferred to their cellphones. Local officials said they believe armed rebel groups use cellphones and [texting] to coordinate their operations in the country's eastern provinces, where they fight regularly with 17,000 U.N. peacekeepers, the largest U.N. force in the world.

But just as a tsunami can't be stopped, so the scoundrels are bailing water with a sieve if they want to halt the unstoppable; that's because the velocity of social change has been greatly accelerated by the revolution.

There are attempts to coordinate the different programs, without much success. However, the compartmentalizing has always meant that governments that administer the programs can't keep up with the problems that the programs are meant to address. Yet you can see for yourself by reading the Sullivan and Rosenthal reports that once rural peoples learn to utilize cheap, portable communications and energy technologies, this de-compartmentalizes the typical model of rural development.

Note how within the space of one year Sara Ruto went from owning her first cell phone to generating her own electricity to becoming an entrepreneur. And note how this markedly improved her children's health and education. That says nothing about the huge savings in her caloric output brought about by electricity and electronic communications. Energy she was expending toward repetitive baseline survival tasks she can now divert to more creative activities, ones that help her make even more gains in improving her family's lot in life.

And note that the pioneers in a village don't know at first about all the ways they can benefit from a cell phone and a single solar panel; once they do know, word of mouth quickly spreads the news. The upshot is that the velocity of social change is rapidly accelerating and branching out to address, in intuitive fashion, all the problems that the old development model sought to address piecemeal.

Driving all this rapid change is Do-it-Yourself fever. Many old-world societies attach a stigma to tinkering because of rigid class distinctions and the idea that the most coveted stations in society don't include manual labor. This attitude has tended to discourage the budding MacGyvers in such societies. Today, the discovery that there are all sorts of cool cheap gadgets you can hook up yourself to make your life scads easier is bringing out the tinkerer in millions who live in the old world. If that's not a great thought to start off the New Year with, I don't know what is. 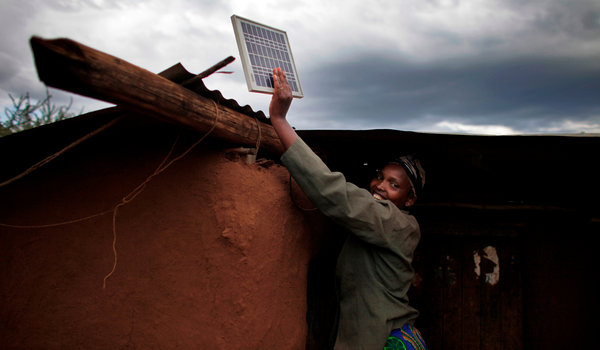