Part 5 of Shoot Yourself in the Foot health care: It's 1 AM; time for a snack before bed

Guess which mouse gets to eat whenever it wants 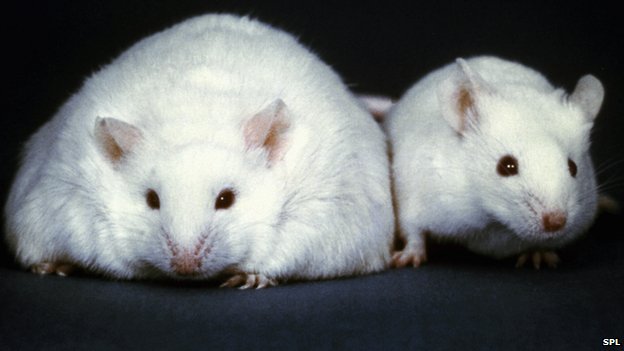 The only difference between the two lab mice in the photograph above is that the one on the left is allowed to eat any time it pleases, whereas the slender mouse sticks to a sane eating schedule -- sane by the body's definition of sanity.  Otherwise, their diet and exercise routines are the same.

There's a reason the first meal of the day was named "breakfast;" it referred to breaking a literal fast of roughly 12 hours. This fasting traditionally extended from the end of the evening meal to the next day's first meal; in other words, most of the fast is due to sleeping.
Then came electric lights, indoor plumbing, and indoor ice boxes. Then TV and late night television shows.   And with this, the after-dinner snack and before-bedtime snack (or outright meal), followed six or eight hours later by a morning meal.  Somewhere in all this modernizing of meal scheduling the fast disappeared from breakfast.

Yet the experiment with mice suggests that their body clocks need roughly a 12 hour rest from noshing to keep their inner house in order.  If there's no order, then chrono-chaos (see the previous Pundita post) extends to the body's process of 'natural' weight management.

The big question for Science is whether mankind and mouse are pretty much the same in this regard.  Researchers who experimented with the mice are now planning studies to test whether the human body's inner clocks are also thrown out of whack by abandoning the age-old 12 hour overnight fasting rule.

I think the most interesting finding to come from the mice study is how sensible the mammalian organism is, after spending millenniums breaking its own fasting rule. A couple times a week the slender mouse in the photo was allowed to eat whenever it wanted,and this cheatingi didn't derange its body clocks.

If this sensible approach extends to humans, then it's not as if one can never eat a late-night meal.  It's just that most of the week the overnight fast would have to be observed to naturally manage weight.

Of course there's a way people could get the answer without waiting for the researchers, isn't there?  The natural weight loss is striking in fat mice when they're put on an eating schedule that for the most part honors the 12 hour overnight fasting period.  From a December 2 BBC report on the study (Why late night dining may encourage weight gain; Emma Wilkinson, reporter; the above photo is from the report.):


Even when given the same amount of calories overall, mice that ate around the clock put on more fat.

Fasting for at least 12 hours appears to switch on important fat burning pathways in the body. [...]

During the study around 400 mice were fed diets high in sugar or fat or both, or normal diets and over different time periods.

Overall, mice that were only allowed to feed for nine or 12 hours gained less weight than mice that could eat the same amount food but at any time they wanted in a 24-hour period. [...]

Even when the restricted feed time mice were allowed a blow out at weekends and could eat when they liked, they still gained less weight, suggesting that the diet can withstand some temporary interruptions, the researchers said.

And when obese mice who had been eating freely were moved to a restricted schedule they lost 5% of their body weight even though they were eating the same number of calories as before.

The researchers believe a key to controlling weight gain could be sticking to a consistent 12-hour fast every 24 hours.

In the experiments, fasting at night had beneficial effects on blood sugar and cholesterol and reversed the effects of diabetes in the mice.

Study leader Dr Satchidananda Panda, an associate professor at the Salk Institute in California, said that brown fat, which burns energy at a much higher rate is also activated by this approach.[...]

Now you really want to let the ramifications sink in, if tests on humans comport with mice tests.  Think of the trillions of dollars poured into medical care and medications for illnesses created or exacerbated by obesity. Think of billions of lost work hours from these illnesses.  And think of the huge waste of resources in making large-size clothing for fat people, making larger plane seats for fat people, and so on.

There would also be a tie-in with a factor that's not been very evident until the past few years.  The International Energy Agency felt its way to the realization that governments in 'developing' countries are shooting themselves in the foot, if they want to limit greenhouse gases, by providing endless fuel subsidies. Human nature being what it is, recipients tend to look at the subsidies as an invitation to expand their energy use to an outlandish degree.

That's how residents of Cairo, Egypt became all-night party hounds, with restaurants filling fast food orders called in all night from cell phones.  The nightlife society is made possible by wildly cheap electricity -- and gasoline, which of course powers the food delivery vehicles.

Earlier this year the country's new government raised fuel prices in an attempt to put the lid on fuel subsidies, which eat up nearly a quarter of the state's budget. For details, see this richly ironic op-ed at Forbes, Hurrah!  Egypt's Reduction of Fuel Subsidies First Step To Climate Change Solution!

The point for this writing is that one might be able to trace a line between the rise of subsidy-fueled nonstop nightlife in Cairo (and nightlife in other big 'second world' cities) and Western-style diseases rooted in, or exacerbated by, being seriously overweight.  And if the chrono-nutrition testing on humans pans out, it could be possible to trace another line -- one between between overweight people and their abandonment of the body's 12 hour overnight fast.

If these three lines actually intersect, we'd be looking at a chart depicting a kind of racial suicide -- and not so much from bad diet or over-eating but from eating at the wrong times.  The enjoyment of modern amenities and plentiful food wouldn't get much more counterproductive that.

As to how people who want to be their own test subjects can withdraw from late-night snacking without dying from hunger overnight  -- I'd say "very slowly and incrementally."

As to how Cairo residents can party all night and still show up at work in the morning -- it could be that the biggest reason so many Egyptians got behind booting the Muslim Brotherhood from power is that at least one high-ranking member of the organization loudly observed in 2011 that Egyptians in government had to stop sleepwalking through their jobs.  (A lot of Egyptians work in government.)   Screw the politics, just don't take my 3 AM pizza away from me.