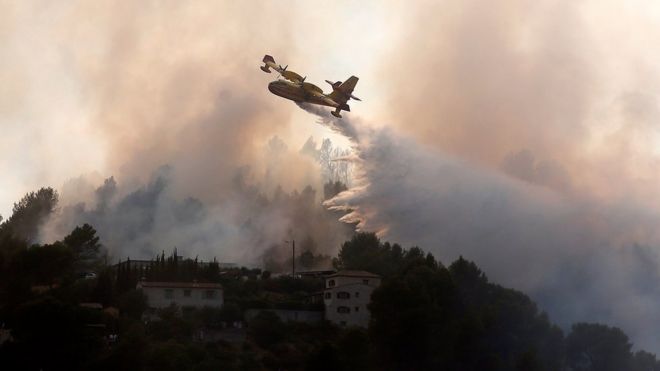 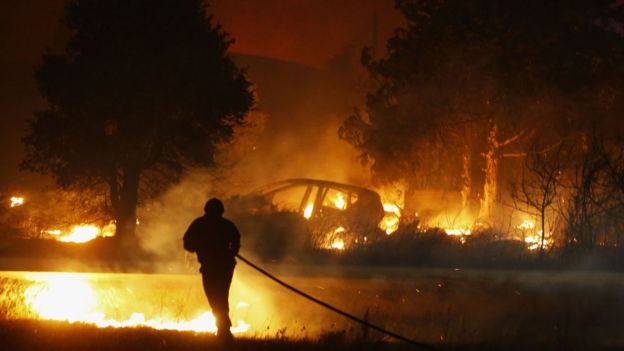 Unusually hot, dry and windy weather in south-east France has contributed to the spread of forest fires across the region.

The island of Corsica, the town of Carros, close to Nice, and Saint-Tropez were among the areas badly hit on Monday.

Hundreds of homes were evacuated as a precaution.

"And the fight is going to be very, very long tonight," he added as firefighters worked into Tuesday.

Photo from the Mirror


A huge fire has hit the French Riviera with the blaze forcing residents to flee homes in the Saint Tropez region.


Photos shared on social media show large plumes of smoke above the hills above the posh beach resort region.


"Just made it to escape from our house!"

The location of the fire has been described as southeast of the main St Tropez township near the town of Ramatuelle.

Water-bombing helicopters were said to be urgently flying over the area in a bid to put the flames out.

"With a lot of wind at the moment, so things seem pretty bad out there."

The wildfires started in the region a week ago:

France fights forest fires near Nice, in Provence, Corsica
The Associated Press
July 18, 2017 - 4:12 AM ET
Hundreds of firefighters are working to extinguish a forest fire about 15 kilometers (9 miles) from the French Riviera city of Nice, as unusually hot and dry weather has hit much of France.
Jean-Gabriel Delacroy of the Alpes-Maritime regional administration said Tuesday that the fire near Nice is "under control" but not yet over after breaking out Monday night.
Speaking on broadcaster Francetvinfo, Delacroy said three firefighters were lightly injured in the blaze, which consumed 120 hectares (about 300 acres) of forest and reached the town of Castagniers, inland from Nice. No homes have been hurt so far, he said.
Whipped up by Mediterranean winds, fires in recent days have also hit Provence and Corsica during the high summer tourist season.
[END REPORT]
********
Posted by Pundita at 7/25/2017 03:19:00 AM