How did Rami Abdul Rahman, the head of the Syrian Observatory for Human Rights, come up with his published tally of intercepted American, British, and French missile strikes in Syria on April 14, and do it so very quickly -- on the morning of the strikes, and two days before the Russian tally was published?

The answer might be pretty darn strange, so let me begin before I lose my nerve:


All quotes below are excerpted from Wikipedia's article 2018 missile strikes against Syria.

From the "Forces involved" section:

According to US military's Joint Staff, the allocation of missiles to targets was:[62]

So the U.S. claimed that only three Syrian sites were targeted, with an incredibly large number of cruise missiles aimed at just one of the sites, which was not fortified.

From the "Strikes" section

The Syrian Observatory for Human Rights (SOHR) said the attack sites included two scientific research centers in Damascus and another in the Homs area, as well as military bases in Damascus.[8]

The US armed forces said all missiles hit their intended targets without interference,[65] and according to Lieutenant General Kenneth McKenzie, the Syrian air defences fired 40 intercepting surface-to-air missiles but failed to hit any of the targets. He said most were fired after the last incoming missile had struck its target.[72]

Similarly, France said none of the twelve missiles it fired appear to have been intercepted,[73] although there were reports that between three and seven French missiles were not fired due to malfunctions.[74]

The Syrian army said it "intercepted most of the missiles",[65] while the Syrian state media reported its air defenses shot down 13 incoming missiles near Al-Kiswa, south of Damascus.[46]

The Russian military reported Syria's air defences shot down 71 of 103 cruise missiles,[64][65] and listed various airports and airbases, not mentioned by US military sources, as having been targeted partly or completely unsuccessfully.[75]

The SOHR, which is cited by many western media organisations, reported no known casualties, but stated there was considerable material damage while also saying that the Syrian Air Defense Force intercepted and downed at least 65 missiles.[76][77]

From the "Aftermath" section:


According to Jane's IHS, the Russian Ministry of Defence (MoD) on 25 April 2018 "appeared to contradict" the MoD's earlier 16 April account, and was now stating that 22 (rather than 32) missiles hit their targets, that 66 (rather than 71) were intercepted, and that other incoming missiles had suffered technical malfunctions.

****
In other words if the Syrian air defense indeed intercepted and downed several missiles then, astonishingly, the SOHR count may have proved more accurate than the Russian military's.

But how? How could a one-man operation in Coventry, England with a few hundred scattered contacts among Syria's opposition fighters and anti-government activists come up with an accurate number -- and do so on the very morning of  the missile strikes? (1)

And why, for that matter, would SOHR -- famously anti-Assad -- publish an account that flagrantly contradicts the official American one and credits Syria's military for disabling several missiles?

To come up with even a guess as to the answers we'd have to learn more about the Syrian Observatory for Human Rights. One could start with the brief Wikipedia article. Next I'd study Land Destroyer's unsigned April 2013 article, EXPOSED: Syrian Human Rights Front is EU-Funded Fraud: New York Times admits fraudulent Syrian human rights group is UK-based "one-man band" funded by EU and one other "European country."

For reasons he explains in his LD report, Tony Cartalucci (he's surely the author) is certain that the "other European country" is actually the United Kingdom.

Of course the British military was one of the three that participated in the April 14 missile strikes in Syria. So that would be one way for SOHR to quickly ascertain whether any, and how many, missiles were intercepted: If someone in the British ministry of defense called the SOHR one-man band's handler and told the handler to tell Rami Abdul Rahman how many missiles were intercepted and where.

But this guess poses a sticky wicket. Why would someone high up in the British government -- or maybe the British Labour Party -- want BBC readers to know straightaway that the Trump regime was lying about a perfect strike score and about the number of targeted Syrian sites?

Not very pukka sahib, that scenario. On the other hand some in the British military might not consider Donald Trump pukka sahib.

And while I'm on the topic of character, bombing to rubble a site that the OPCW had inspected and cleared of chemical weapons, a site that was of vital importance to the health of all Syrians and the country's economic recovery, is most certainly not pukka sahib.

Of course there could be other guesses about how SOHR came up with their count. And what if the Joint Staff told the truth and SOHR -- and the Russians -- were full of hot air?

The problem is that the Barzah site -- the one that took, by the U.S. count, 76 cruise missile hits in total, doesn't look as if it was hit by that many missiles, even though it sustained considerable damage.

See for yourself; SANA (Syria's state news agency) published 21 photos of the Barzah site the day after it was bombed (click on the photos to enlarge them).

But to quote from Defense Zone's Tyler Rogoway during his eight minute May 7 discussion with John Batchelor about the strikes:


[About] 104 standoff attack munitions -- these were cruise missiles -- were fired at three targets ... and every target was obliterated.

Here's one of the SANA photos. Does that look like obliteration to you? 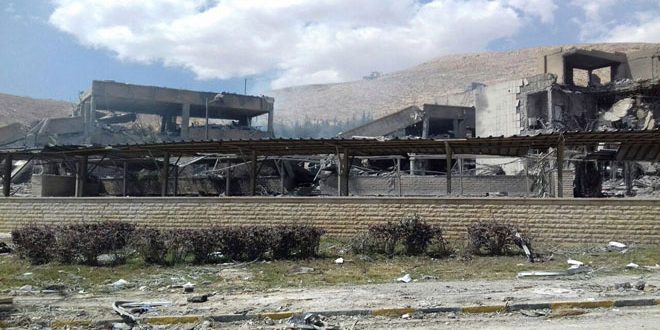 The U.S. would have an explanation, I think, for the apparent discrepancy. Here is a graphic provided by the U.S. military, published in Wikipedia's article on Barzah: 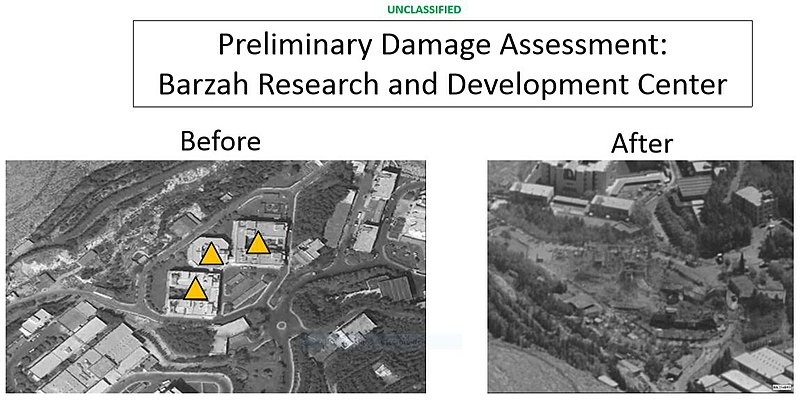 The graphic shows that the purported 76 cruise missile strikes were aimed at very specific places in the Barzah compound. However, if you study all the photos at SANA, you might ask why, then, the pinpoint strikes made such a mess elsewhere in the compound.

And there is the problem of veteran reporter Robert Fisk's eyewitness account for the (U.K.) Independent newspaper. He clambered around in a part of the Barzah compound three days after the missile strikes; specifically, he examined the ruin of the Department of Pharmaceutical and Civilian Chemical Research – "the bit of the complex hit by at least 13 missiles."

So somebody had taken a count; whether this added up to 76 missiles is not discussed in Fisk's report but 13 missiles are a long way from 76.

He did note that damage to the compound was greater than photographs showed, although he didn't mention which photos. In any case -- again, there was considerable damage but in many parts there was not the wipeout one might expect from the near-simultaneous impact of scores of Tomahawk missiles.

There is also Tyler's remark. He noted that the strike using that many missiles didn't make sense; I think he might have used the term "logic" -- that there was no logic to the use of that many missiles fired at such paltry structures, unfortified ones, and of such questionable use for work on chemical weapons.

The only conclusion he could take from that much display of illogic was "dog and pony show" -- a show of firepower simply to impress.

But the strikes would be more logical if far fewer missiles were actually fired at the site than the U.S. claimed. Yet if 100+ missiles were indeed fired, then the question would be where were they aimed?

That would open up to the question of why the U.S. would go so far as to construct a gigantic, silly lie to hide the identity of certain targets from the public.

And, if the tallies from SOHR and the Russians are near the mark, it's likely it was those targets that were for the most part successfully defended by Syria's air defenses.

But this would return us to where we started.

So I am left with the question of just how Abdul Rahman came up with his tally of intercepted/downed missiles. I doubt I'll ever get a definitive answer.

And yet I'd find it poetic justice if the Syrian Observatory for Human Rights, which did so much for so long to misinform the British and all Western publics about what was happening in Syria, ratted out the American regime with correct information provided by the British one.

That much poetic justice couldn't happen to more deserving people, none of whom, in my opinion, pukka sahib.