"Fate – monstrous and empty, you whirling wheel, stand malevolent, well-being is vain and always fades to nothing, shadowed and veiled you plague me ..."
-- from O Fortuna, 13th Century poem written by renegade Christian monks to mock the failures, abuses and limitations of the Christian Church

Marriage of HRH Prince William, Duke of Cambridge, to Catherine Middleton at the Collegiate Church of St Peter at Westminster, site of British coronations since 1066 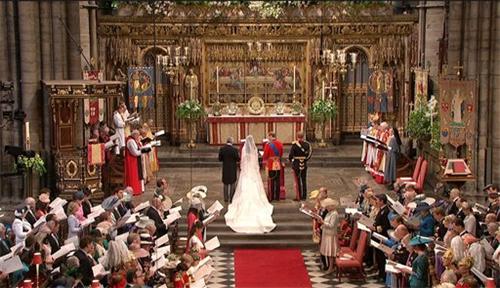 I was surprised to learn that Glenn Beck had dismissed the marriage of William and Kate and refused to watch it. ("Yawn: There was a royal wedding today ... Despite the fact that no one cares about this wedding, the news is wall to wall coverage of all the pomp and circumstance.") Of all people Glenn, who is a vociferous critic of the trammeling of Christian values in America by secularists, should have recognized the profound importance and symbolism of the marriage ceremony in Westminster Abbey today.

Pomp and circumstance were not the points of a sacred play in which the Duke of Cambridge and his bride were only supporting actors. The star of the play was the Church of England as it carried out one its most important functions: acting as symbolic intermediary in the mystical connection between the divine and British rulers. One will have to wait for the next coronation to see the function made explicit (or view footage of the coronation of the present British monarch) but the monarchy endures in Great Britain for the same reason there are few atheists on an icy road.

Those who would sniff at the monarchy and its connection with Church -- which would you prefer, a tradition upheld by centuries of practice or the eccentric ruminations of a former senator from Chicago, who was quite literally deified during the 2008 U.S. presidential election by many thousands of very desperate young Americans?

Thank you very much, the British prefer to hedge their bets on their own eccentric politicians by hewing to the atavistic idea that in this world of vast wheeling forces of fate, a leader invested with sacred rituals might have a little extra pull during the darkest times with whatever passes for a divinity. The marriage of William and Kate was a reaffirmation of this idea.

The marriage ceremony also reaffirmed English cultural values, which had been so thoroughly abandoned in the United Kingdom that by 2008 the Archbishop of Canterbury -- the same archbishop who officiated at the marriage -- was calling for the formal recognition of Sharia law, and the Royal United Services Institute defense think tank was warning that the loss of British values and national identity caused by "flabby and bogus" government thinking about multiculturalism had made the country vulnerable to attack from Islamic terrorists.

The carefully directed and controlled filming of the marriage ceremony kept images of the few Arab potentates in attendance out of the live feed that was seen around the world, and the waving of thousands of British flags to the tunes of Anglican hymns by onlookers watching the marriage on huge screens outside the abbey was just one detail in the choreographed tribute to being English.

The Anglican church's tolerance was given a nod by seating of representatives from other religions in a discreet place of honor. But the homily delivered by the Bishop of London to the newly married couple served notice that a religion must set limits to tolerance. The lesson emphasized that the estate of marriage in the Christian tradition pertains to a union between male and female:


In a sense every wedding is a royal wedding with the bride and the groom as king and queen of creation, making a new life together so that life can flow through them into the future.

The entire ceremony was an attempt at restoring civilizational certainty, which the English had frittered away over the course of a half century.

The United States of America cannot follow the British and establish a monarchy, but one would hope that if the British find some measure of success at defending the civilization on which their most fundamental values are based that this will waft to American shores in the manner of the mini-skirt and the Beatles.

Better hope -- nay, better pray -- this will happen and happen soon, before many more thousands of American youth stare down the barrel of nihilism, with nothing to serve as their moral compass but the teaching that the U.S. Constitution is a outmoded document thought up by old white men.
Posted by Pundita at 4/29/2011 11:54:00 PM

I find you to be thoughtful.What are your thoughts on the christist terror let loose on India by the very intelligent and sophisticated Anglo-Americans?

My thoughts exactly, a celebration of today that connects with the very traditional past of a culture that made Britain 'Great'
Three Cheers for William, Kate, and Great Britain. 50gary

The short answer to your question is that the churches in Ireland and England are empty; I don't know about the rest of the British Isles but it's probably the same. In America, Islam is gaining huge numbers of converts because so many Americans don't believe they're getting enough moral guidance from the Christian church.

This says nothing about the onslaught of Communist organizations on the American public school system. This situation is no joke. At least once a week Glenn Beck details some of the horror stories about what's going on in the schools.

In one sentence, what's going on is that it took the Communists decades to patiently infiltrate the American education system and now comes the fruits of their efforts. Teachers and school boards are indoctrinating children in high school and even grade school. And they're not just interested in turning the children against all religion and the capitalist system; they're turning the children against their own nation.

Meanwhile, American Christian organizations are running around India and other parts of the world buying conversions to Christianity.

Meanwhile, the Saudis are running around America pouring money into organizations and academic institutions that will promote Islam in the USA.

Meanwhile, a British journalist told of riding in a taxi from Kennedy airport to Manhattan; the cabbie asked what his nationality was. When he replied, "British," the cabbie shot back, "Which sect? Sunni or Shia?"

However, you might not like my answer for dealing with this kind of idiocy. I don't think I'll have the time this coming week but soon I'll write an essay to detail my answer. Thank you for your question, which prodded me to move up this topic on my to-do writing list.