Metacognition, pie-making, and metaphysics of the U.S. federal budget 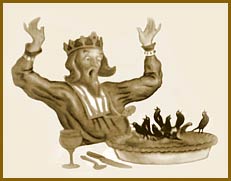 I'm proud to announce that Mark Safranski, the Zenpundit author, included in his latest roundup of recommended reading and viewing my attempt to pry loose from the spirit world answers to the mystery of Nicolas Sarkozy. The roundup also highlighted a wonderful short essay on the U.S. federal deficit by Dave Schuler at The Glittering Eye. The essay, published on April 15, is titled Deluged With Budgets, Overwhelmed With Questions.

I wish I'd seen the essay before I wrote about Donald Trump because Dave brings out the essence of what I struggled to say in my criticism of the Tea Partiers and the Democrats and Republicans. I realized while reading his essay that all these people had turned a fiscal topic into a branch of metaphysics.

Dave first quotes economist Paul Krugman's observation that radically different approaches to dealing with the federal budget, as exemplified by the theories of Paul Ryan and Barack Obama, weren't just about visions of society. "There was also a difference in visions of how the world works." Then Dave observes:


Indeed there were, and I found them visions that varied from mistaken to delusional to demagogic. But it likely explains why the 2011 budget was so late: there are conflicting and irreconcilable visions of how the world works and all parties finally came together on the single point they could agree on (getting re-elected).

Eureka! That's just why I ran screaming to Donald Trump for refuge. If Trump becomes President he plans to let them all continue arguing about the number of budget cuts that angels can fit on the head of a pin, while he goes out and scares up revenue streams for the USA that don't depend on the federal budget.

Official Washington really has gone bonkers, you know that? I didn't realize how far gone Washington was, until I took in Trump's real-world approach to dealing with America's financial crisis.

Anyhow after Dave nailed the situation he deconstructed some of the daffier theories about the budget. I'll grant that part of the daffiness is rooted in political survival, but my question is whether any of the politicians can make sense when they're not trying to appeal to voters. That I should think is the litmus test.

So while Mark's roundup only mentions in passing one of his own recent posts, I think we could all do with a review of our thinking processes, which Mark recommends in his post:


Something I try to impart in my students is the practice of metacognition. Not that I expect them to execute a precision analysis of their thought process the first time through, or even the fiftieth.

Instead, I am trying to break them of habitually moving on mental autopilot, running “tapes” in their head recorded by cultural osmosis, to stop and ask themselves, what do I really think here? With skepticism and active, focused, attention. For more than a few it is the first time in their lives experiencing what it is like to be intellectually awake and in control of their own thinking.

Yessireeebob, unless we remember to think about how we think, we always run the risk of making the data we analyze conform to what we think it should mean. Dave Schuler properly terms this very human trait "epistemic closure;" I call it "pie-making."

Think of a pie pan as your agenda and the data you collect as the dough, with your analysis of the data as the pie filling. The data that don't fit into the agenda you exclude, in the manner of a baker slicing superfluous dough from around a pie pan.

You can get away with this approach sometimes for years; you bake wonderful pies that are considered delicious by those who see things from your point of view. Then one day you look up and ask, 'Where did all these Black Swans circling above my head come from?'

The catastrophic events appearing out of the blue are made from all the dough you sliced from your pies -- all the data you considered to be out of whack with your agenda and thus, having no validity.

So the biggest problem with the agenda-driven approach to data analysis is that it eventually conditions what the brain 'sees' -- and doesn't see. And that, I submit, is how so many people in Washington came to act like the townfolk in The Emperor's New Clothes.

One might blame the susceptibility to cognitive blindness on the very severe pressures Washington lawmakers and the executive branch have been under because of America's fiscal crisis. But when that many people are blinded in such fashion an additional psycho-epistemological phenomenon, well known in scientific research, could be in play: your ability to continue seeing the value in a loopy working hypothesis is in direct proportion to the funding you receive to continue your line of research lol.

Bad Pundita! Don't laugh! Ah well, I can't help it; I get such a bang out of watching the genius we call human nature being itself. Damn the neurons and synapses, full speed ahead!