The devil was in the unimaginable: Wall Street Journal's anatomy of disaster preparations in Tacloban for Supertyphoon Haiyan/Yolanda

Satellite image provided by the U.S. Naval Research Lab shows Typhoon Haiyan
as it tracked toward the Philippines on November 7 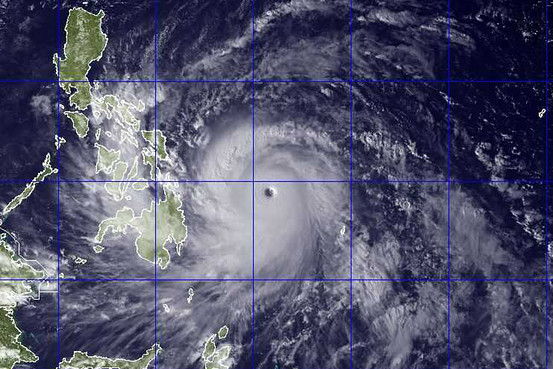 ﻿This is not the first time The Wall Street Journal has wrested order from the chaos of events related to a natural disaster. In 2005 a regiment of WSJ reporters descended on New Orleans, Louisiana on a mission to piece together what had caused the disastrous flooding in the Lower Ninth Ward during Hurricane Katrina.

The result of the investigation was written up by WSJ staff members Jeff D. Opdyke, Evan Perez, and Ann Carrns and published in updated form September 7, 2005 under the headline Anatomy of a Flood: 3 Deadly Waves.

The report is as riveting today as it was at the time of publication; it conveys the scope of a disaster and the avoidable human errors that contributed to it, yet without losing track of the fact that humans aren't given to imagining how a perfect storm can actually play out.

This approach to analysis repeated itself with The Wall Street Journal 's November 24 report Typhoon Haiyan: How a Catastrophe Unfolded, written by Te-Ping Chen, James T. Areddy, and James Hookway with contributions from Josephine Cuneta and Cris Larano.  It reconstructs how officials in Tacloban prepared for the arrival of Haiyan, or Yolanda as it was called in the Philippines, and what happened to the preparations when the superstorm struck the city.

The Journal report details key mistakes in the disaster planning:  some mistakes tragicomic in the planners' inability to comprehend the power of the juggernaut wheeling across the ocean toward them, some forehead slappers (Oops! Forgot the satphone!), some so wrenchingly ironic it's hard to consider them at any length.
But in the end it is the Journal's tale of the plucky if blinkered officials, who did their best to prepare the city then toughed out the juggernaut's arrival, which puts all the mistakes in context.  Given Yolanda's power and Tacloban's precarious location on a bay, the only really effective disaster preparation would have been the same as the only effective preparation for Katrina's arrival in New Orleans: complete evacuation of the city's residents to a considerable distance inland.  That was possible, in both cases, only in a perfect world.

And yet there is one aspect of the disaster that is downright devilish. The storm did not create a tsunami, although the effect of the wave surges had the very same effect on the city as if a tsunami had struck. The residents were very familiar with the kind of damage a tsunami could do.  So if only they'd known, they would have fled as far inland as they could.  But see, the weather forecasters -- here; I'll let the Journal reporters tell the story:


Typhoon Haiyan hit with full force in the early hours of Friday, Nov. 8. Some residents described it as sounding like a jet engine, others a loud scream. Within minutes, the floods that came with it decimated almost every aspect of the city's defenses, rendering futile almost a week of preparations.
[,,,]
Even then, the warning wasn't widely heeded, in part because the term "surge" was unfamiliar even to those who have lived for years with fierce storms. "If they'd termed it a tsunami, I would have been very afraid," said Evelyn Cordero, acting head of the Government Services Office, which helps procure city supplies. "When they said 'storm surge,' it didn't really click in my mind."

The difference between the two is one of origin, not scale. The Philippine state forecasting agency, which officials in Manila and Tacloban were relying on for news of Haiyan, uses "storm surge" to describe giant waves caused by changes in atmospheric pressure and high winds during tropical storms. A tsunami, in contrast, is triggered by earthquakes.