Who knew Islamic State was a fan of French colonialism?

" ... terrorist proxies are changing from a war-footing -- having lost the war -- to a last-ditch posture of claiming legitimate opposition in hopes of salvaging what's left of the political networks and terrorist fronts that collaborated with the West ..." 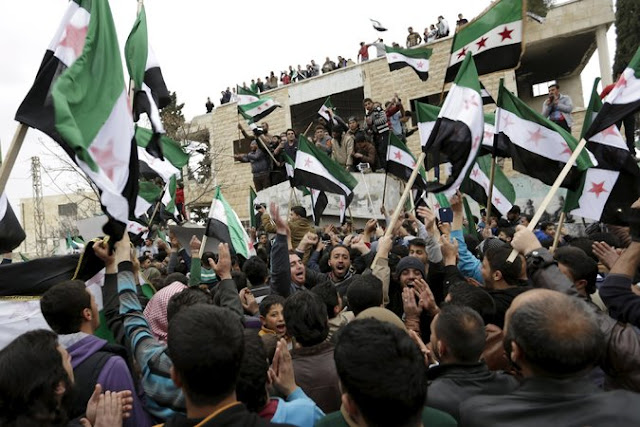 Today SouthFront spotted a misleading Guardian headline (Syria rebels clash with Kurds in Aleppo as peace talks approach). Although they acknowledged that the Guardian report does get around to mentioning that rebels clashing with YPG in Aleppo are actually Nusra Front (al Qaeda), SouthFront couldn't resist lobbing this zinger:


It looks like The Guardian’s next step will be to report about “democratic activists” from ISIS.

The joke could be on SouthFront because from Tony Cartalucci's latest report and other indications it seems that is exactly what is happening. Trapped Islamic State state fighters in Syria are exchanging their black and white flag for the French colonial Syrian tricolor used by the "Free Syrian Army"  and presenting themselves as moderates.

As to why the fighting groups calling themselves a Syrian army took up the French colonial flag -- remember Thierry Meyssan's October 2015 report for Voltaire Network, Why does France want to overthrow the Syrian Arab Republic? Thierry is crazy only part of the time. His problem is that the times when he's not crazy Americans find it hard to follow his discussions because what we know about Western colonialism and Arab lands would fit on a flea's wing.

If you ask at this point just how many governments have been trying to take over Syria -- if you ever figure out the answer please let me know. Tony seems to have given up trying to keep count, alternatively lumping the players as "Washington's coalitions" and "Washington-Riyadh" and very incorrectly as "the West" (which leaves out Turkey, KSA, Qatar, UAE) but whatever the number and nationalities of the players he certainly caught the Buzzard Faction with its claws in the cookie jar, although I have no idea where he got hold of this map: 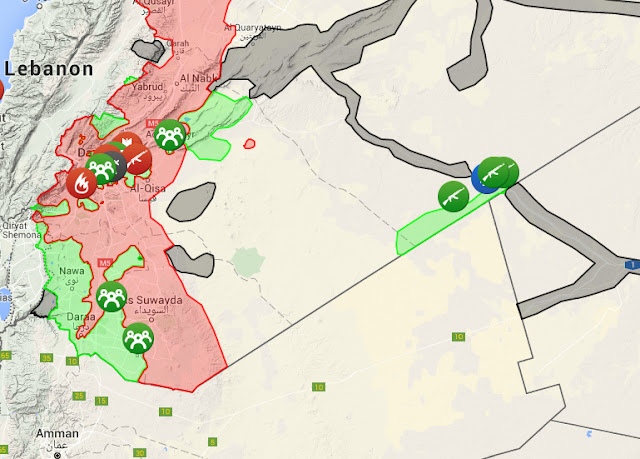 Image: Center-right, a green blob indicating a nonexistent "rebel army" suddenly appears and "cuts" ISIS supply lines between Syria and Iraq. Phantom "rebel" armies are appearing suddenly and seemingly inexplicably in the midst of ISIS formations just as it seems ISIS is finally cornered and facing destruction. However, there is an explanation - ISIS is simply running up a new flag, with the help of their Western sponsors.


The map and caption as well as the above photo of flag-wavers are featured in Syria: Phantom "Rebels" Return from the Dead:

March 7, 2016 (Tony Cartalucci - NEO) - The French colonial green, white, and black banner of Syria adapted by the West's proxy "Free Syrian Army" (FSA) had long been forgotten in the sea of black banners held aloft by Washington and Riyadh's more extreme ploy to gain leverage upon and more direct access to the battlefield.

However, as Syrian forces backed by its regional allies and Russian air power overwhelm these forces while building alliances with other factions, including the Kurds, the West's entire regime change enterprise faces ignominious collapse.

It appears that -- having exhausted all other options -- the West has decided to change as many of those black banners back to the "rebel" green, white, and black as possible, before the conflict draws to a close, giving the West the most favorable position achievable ahead of "peace talks."

The West's Shape-Shifting Proxies
For years, just looking at maps - including those produced by Washington-based think tanks themselves - revealed the true nature of Syria's ongoing conflict. Forces could be seen flowing into the country as one would expect amid an invasion, not a "civil war."  While the West's military campaigns over and upon Syrian soil claimed to be taking on the so-called "Islamic State" (ISIS), it was clear that nothing was being done about cutting off the obvious supply corridors sustaining ISIS' fighting capacity.
In other words, the US and its "coalition's" war on ISIS was feigned. No genuine military campaign would ever be fought on the front lines while neglecting the enemy's logistical lifelines - especially when those lifelines led from NATO territory.

It wasn't until Russia's intervention on behalf of the Syrian government, that these corridors were targeted and disrupted -- thus fully exposing the gambit for all the world to see.
Not surprisingly, as soon as this began, it had an immediate effect on the West's proxy forces across the country. Since then, Russian-backed Syrian forces have incrementally begun sealing off Syria's borders, isolating stranded terrorist factions within the interior of the country, and retaking territory as these forces atrophy and dissipate.
For years it has been asked why the West has done nothing about cutting these obvious supply corridors leading into Syria and sustaining terrorist factions like ISIS, Al Nusra, and their allies - groups which now clearly constitute the vast majority of militants fighting the Syrian government - even by the US government's own admission.
As the global public becomes increasingly aware of this glaring point of logic, it appears that the West is now attempting to cynically leverage it, while simultaneously rescuing thousands of trapped terrorist mercenaries facing encirclement and eradication in the closing phases of the Syrian conflict.

Just last week, the "New Syrian Army," a moniker for the discredited  FSA, suddenly appeared on the Iraqi-Syrian border, "cutting off" ISIS supply lines leading back and forth between the two countries.
Reuters in their article, "Syrian rebels seize Iraq border crossing from Islamic State: monitor," would claim:

The only "source" is the Syrian Observatory for Human Rights, which is in fact a single man living in England who regularly coordinates with the British Foreign Ministry.
One could ask why such border interdiction operations haven't been done before, and in fact, why these "rebels" who are admittedly harbored, trained, funded, and armed in Jordan and Turkey to begin with, didn't first begin by securing Syria's borders to prevent ISIS from entering the country in precisely the same areas "rebels" are supposedly operating?
The answer is simple. The West had no intention of stopping ISIS. In fact, ISIS is the "rebels" and the "rebels" are ISIS. Their "taking" of the Syrian-Iraqi border is superficial at best. The weapons, cash, and fighters will still flow, just as they do past NATO forces along the Turkish-Syrian border. The only difference is that now these terrorists will be flying the "FSA" flag, lending them protection amid a ceasefire agreed to in good faith by the Syrian government and its allies.
Rebels are Not Prevailing - ISIS is Just Flying a New Flag
The ceasefire has, at least temporarily, bought time for terrorists groups Syria and Russia have - perhaps mistakenly - recognized as militant groups to be negotiated with. Taking full advantage of this, the "FSA" is now suddenly appearing as if rising from the dead, everywhere ISIS and Al Qaeda have dominated for years.
The New York Times published its own desperate bid to convince the global public that once again "pro-democracy protesters" were climbing out of the rubble in Idlib and Aleppo - two cities admittedly overrun by Al Qaeda and ISIS long ago - and flying the "FSA" flag.
The article titled, "Syrian Protesters Take to Streets as Air strikes Ease," claims that:


Street protests erupted across insurgent-held areas of Syria on Friday, as demonstrators took advantage of the relative lull in air strikes during a partial truce, coming out in the largest numbers in years to declare that even after five punishing years of war they still wanted political change.

Under the slogan “The Revolution Continues,” demonstrators waved the green, white and black pre-Baathist flag adopted during the early, largely peaceful stages of the revolt, before the proliferation of armed Islamist factions with black jihadist banners.

Five years on from the so-called "Arab Spring," the fully engineered nature of the original protests in 2011 have been so thoroughly exposed and understood by the public, that few if anyone believes these protests now are anything but a desperately staged public-relations campaign to prove that there are people elsewhere besides Washington, Langley, London, and Brussels, that still seek regime change in Syria.

The West's terrorist proxies are changing from a war-footing -- having lost the war -- to a last-ditch posture of claiming legitimate opposition in hopes of salvaging what's left of the political networks and terrorist fronts that collaborated with the West in this highly destructive conspiracy.
"Uprising" in Al Raqqa
Finally, in the very heart of the West's proxy terrorist forces, Al Raqqa - the defacto capital of ISIS - there are suddenly reports of "uprisings" by the local population. This happens conveniently as the Syrian Arab Army approaches from the west and Kurds descend upon the city from the northeast.
Leading up to this "uprising" was a story in the London Telegraph titled, "Islamic State 'hit by cash crisis in its capital Raqqa'," which claims:


Faced with a cash shortage in its self-declared caliphate, the Islamic State of Iraq and the Levant has slashed salaries, asked Raqqa residents to pay utility bills in black market American dollars, and is now releasing detainees for a price of $500 a person.

While the Telegraph credits "coalition airstrikes" for this turn of fortune, it is quite obvious that Syrian and Russian airstrikes along the Turkish border destroying entire convoys bound for ISIS territory has led to a reduction in ISIS' fighting capacity as well as its ability to administer seized territory.
With a terrorist force the West has spent 5 years and untold billions creating facing complete encirclement and eradication, what options are left? An "uprising" where suddenly the entire city is flying "FSA" flags, thus negating the need for Syrian or Kurdish forces to move in and retake the city? 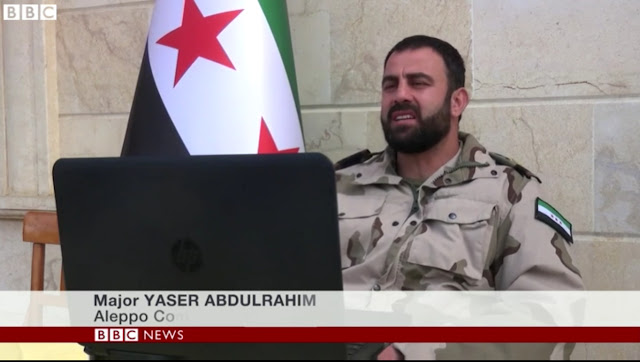 Image: If Major Yaser Abdulrahim looks like he's never worn his FSA uniform out into the field, that's because he hasn't. He is not a member of the FSA at all, and is instead a commander of the Fatah Halab, an umbrella group for Al Qaeda affiliates armed and funded by both the US and Saudi Arabia.

That appears to be the narrative the West is already preparing - in Raqqa and elsewhere across Syria - as a component amid the so-called "ceasefire" and "peace talks."
The BBC had dressed up a terrorist commander in FSA regalia for an interview - but included footage of the commander in the field operating under clearly terrorist banners. It was but an individual example of what it appears the West is doing now on a much larger scale - playing dress-up to save its immense but now stranded terrorist hordes.
During early victories against the West's proxy forces, Al Qaeda and ISIS militants would dress as women to flee the battlefield. Now, they are dressing up as the otherwise nonexistent "FSA."
Will the West expect Syria and its allies to negotiate with this phantom army operating under a fictional banner? For Syria and its allies, what the West is doing is a clear violation of the spirit of the ceasefire and of upcoming peace talks. It is also a reaffirmation of the West's disingenuous commitment to fighting terrorism -- clearly using it as a tool to fight its battles for it,  to serve as a pretext for intervening when terrorism alone cannot achieve an objective, and then, when all else fails, covering up entire legions of terrorists so that they can live to fight another day.
Tony Cartalucci is [to my knowledge an American] Bangkok-based geopolitical researcher and writer, especially for the online magazine “New Eastern Outlook”. [NEO is one of the journals published by the Institute of Oriental Studies of the Russian Academy of Sciences. See Wikipedia article about the prestigious academy, which seems to have gotten into mud wrestling in its NEO publication.
[END REPORT]