On June I published a post on an extraordinary lingam that Sathya Sai Baba materialized on May 5, 1991, and which he said symbolized the "cosmic seed of creation." He dematerialized the lingam a few hours after producing it. At the time of the materialization, he made an unprecedented statement: that his energy would work miracles through just a photograph of the lingam.

I had learned about the lingam only a few hours before I posted about it. Even though I'd been with Sai Baba in the early 1980s I'd had few interactions with his devotees in the intervening years and knew little about the situation around him since I'd been with him.

And so I as much stumbled across information about the lingam. This happened when I suddenly found myself wondering why it was that Sathya Sai Baba had always manifested egg-shaped lingams on Mahashivaratri, during the years he had manifested them on that night most sacred to followers of Shiva. In the 1980s I had seen Shiva lingams manifested by a Shaivite Yogi on Mahashivaratri and they looked like, well, like Shiva lingams. Not egg-shaped.

The question about Sai Baba's egg-shaped lingams had occurred to me at the time but as I had no interest in the Shaivite sect (or Sai Baba's lingam materializations), the question went to the back of my mind until the night of June 1, 2019. I took to the internet in an attempt to get an answer and immediately came across the story of the Golden Heart Lingam and the photographs of it. I did not continue to search; I felt I had gotten the answer to my question, if only I could understand it.

Since then my mind has returned many times to the golden lingam and the mystery of why Sai Baba manifested it at that time. It certainly wasn't during Mahashivaratri and did not happen at the Prasanthi Nilayam ashram where his lingam manifestations, at least the public ones, had always occurred. It had happened in the auditorium during a Brindavan college summer course.

And while the person who reported on the incident didn't specifically say, it didn't seem that Sai Baba had manifested the lingam from his stomach, as happened with the Mahashivaratri lingams. My assumption, from the description of the incident (see below) is that he had simply materialized it with a wave of his hand with no warning.

By why? And why then?  What, if anything, was so special about the year 1991 to merit such an extraordinary gift of grace from Sai Baba?

Based on what is written in Wikipedia about this golden cosmic egg (see below), and on what I learned during my time in Sai Baba's presence, I'm going to make a couple guesses as to the answers. I emphasize that these are just guesses.

First, I think he manifested the lingam to signify that his formal mission in the Sathya Sai Baba incarnation had ended at that time.

If my guess is correct, of course, the Sai Baba form continued on for several more years after 1991 and continued to be available to large numbers of people, but my guess is that May 5, 1991, was when the emanation had accomplished what it was created to do.

Second, and given what has been written about the Golden Heart Lingam, I think his materialization of it was to make it explicit that Sathya Sai Baba had been nothing less than a human incarnation of the Vedic god Prajāpati, who came to be known in 'Hinduism' as Brahma, the god of creation.

Supposedly Brahma never incarnates in human form. But there are exceptions to every rule and my guess is that  Sathya Sai Baba represented an exception.

Those are my guesses.

Closeup of a photograph of Sathya Sai Baba holding the Golden Heart Lingam at the time he brought it forth on May 5, 1991 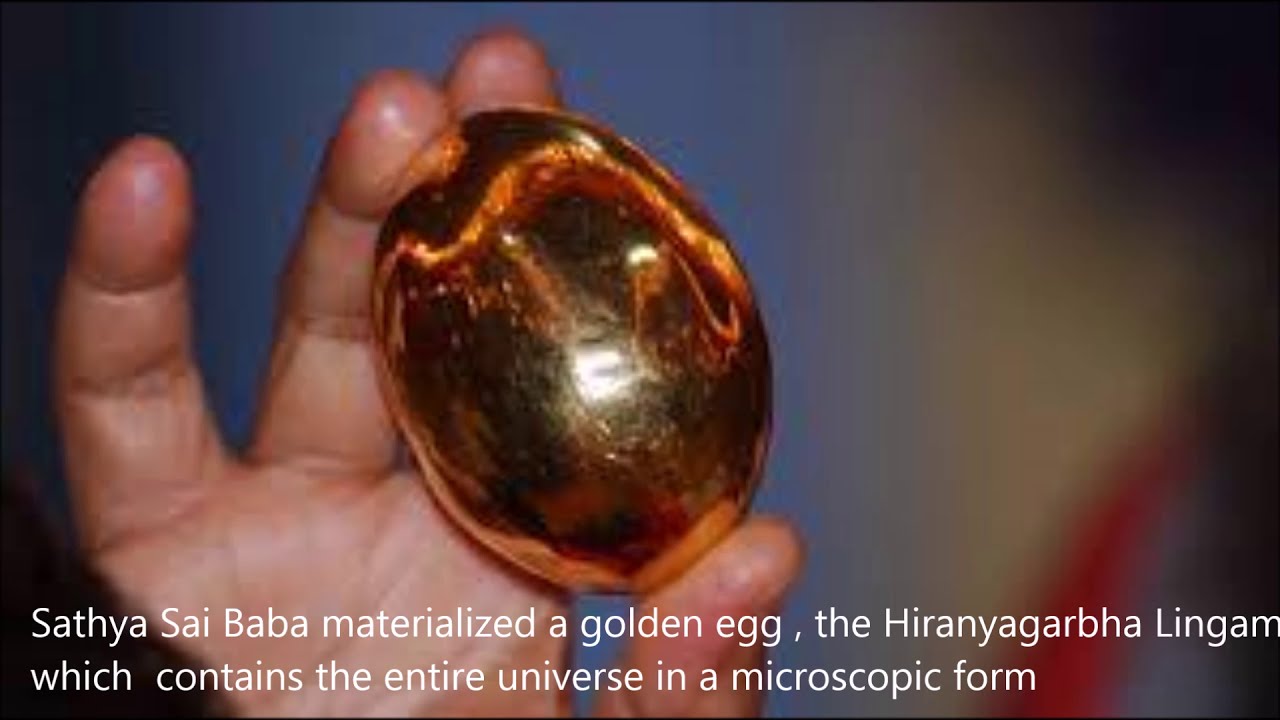 See also "I am the Creator of the Hiranyagarbha from which Brahma was born"; November 23, 2019, Pundita blog.

Himanshu, Is that what Baba said -- is the person actually quoting him? Also, did the person mention whether the lingam came from Baba's mouth or whether he materialized it from a hand gesture? I would very much like to know the definite answer -- although it seems to me that it was the latter. I'd also like to know anything else about the incident that this very fortunate observer can recall -- including whatever he can remember exactly about what Baba said at the time. Thank you! This particular lingam, its significance, is somehow incredibly important in my view.

the person who said so is none other than Satyajit Salian who was Baba's physical caretaker till the end. Sathyajit said Baba materialized the lingam not from His mouth as is usual but from His hand. and he said that Baba rotated His hand in vertical circles and not horizontal circles as He usually does. Baba said this is how creation happened. the Hiranyagarbha lingam is the beginning of creation. the lingam represents Brahma and so Baba actually is the creator of Brahma he said. i would give the link to the youtube but its in Hindi. Satyajit was giving a talk in Shirdi in 2014 when he said the above.

Himanshu, Thank you very much for this precious information! I intend to publish as a separate post our exchanges in this comment section for the benefit of other Indian readers of my blog. (I will alert you here when I publish the post.)

I will also publish, in the same post, Sri Satyajit Salian's 2014 talk at Shirdi even though most of it is in Hindi. I found that the talk is divided into four parts on YouTube. If this series of four YouTube posts is the same you're referring to, can you kindly tell me in which of the parts he mentions the Hiranyagarbha lingam materialization? If you're referring to a different YouTube post, can you kindly send the link? Thank you.

And while this may be too much to ask, is there any chance you could translate into English just the sentences he spoke that refer to the lingam?

Again, thank you very much.

Or maybe I should say it marked the end of the Avatar's mission. Something like that.

yes that is the correct youtube that you found. and it is part 1 where Satyajit talks about the Hiranyagarbha lingam from around 5:00 onwards. i just posted the link above for ready reference. if someone can provide subtitles for the youtube that would be nice for english speaking devotees. i dont know how to do subtitling im sorry.

Satyajit says that after creating the lingam with a wave of His hand, Baba said that this lingam contains, Brahma who created the universe and it is Baba therefore who created Brahma. implying that Brahma is a lesser God than Sathya Sai. Satyajit is awestruck by this revelation from Baba and he talks about that for a while.

well Baba said in 2006 that His mission had been accomplished. so it was sometime before 2006 that the Avataric Mission was over and it simply unfolds by itself. so its possible that you are right about the significance of the Hiranyagarbha materialized on May 5, 1991.

im also stunned by this event. though i was led to it for a different reason.

Himanshu, Thank you again. The additional information is helpful. I don't like to be a stickler, but I'm trying to get very clear on what Baba himself said and what Satyajit said, which is why I was hoping for an English translation of just those specific sentences. But even what is clear at this time is absolutely amazing -- yes, stunning.

Shri Satyajit Salian at around 14:00 of the youtube (Part 1) quotes Baba as saying that "I am the Creator of the Hiranyagarbha from which Brahma was born". those are the exact words of Baba.

Bingo! Thank you SO MUCH, Himanshu!!