Has Dr Ron Paul been branded a Russian agent yet? 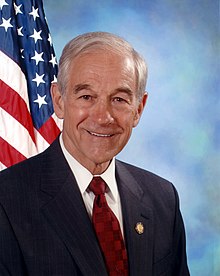 Dr Ron Paul turned 85 years old today. He is a great American, a very loyal American, but by a curious logic just about every loyal American you can name these days who advises against mindless U.S. wars and meddling has been labeled a Russian agent. Such is the state of America's defense/foreign policy establishment and the media, here and abroad, that backs up the establishment.
Protesting the label is no use; there is no defense against the accusation. Whether you know it or not, you're a Russian influence agent even if you aren't on the Kremlin's payroll if you argue against, say, American actions in Syria, which Dr Paul most certainly has done. And God Forbid if you've ever been interviewed by Russia's RT, which Dr Paul has. Any American who speaks to RT or writes an opinion column for them is ipso facto a Russian influence agent. You might not think you work for the Russians but that just goes to show how much they have duped you.
From Wikipedia's article about Dr Paul (not to be confused with his son, U.S. Senator Rand Paul):

Ronald Ernest Paul (born August 20, 1935) is an American author, physician, retired politician, and presidential candidate who served as the U.S. Representative for Texas's 22nd congressional district from 1976 to 1977 and again from 1979 to 1985, and for Texas's 14th congressional district from 1997 to 2013. On three occasions, he sought the presidency of the United States: as the Libertarian Party nominee in 1988 and as a candidate in the Republican primaries of 2008 and 2012. A self-described "constitutionalist", Paul is a critic of the federal government's fiscal policies, especially the existence of the Federal Reserve and the tax policy, as well as the military–industrial complex, the war on drugs, and the war on terror. He has also been a vocal critic of mass surveillance policies such as the USA PATRIOT Act and the NSA surveillance programs. He was the first chairman of the conservative PAC Citizens for a Sound Economy, a free-market group focused on limited government, and has been characterized as the "intellectual godfather" of the Tea Party movement, a fiscally conservative political movement that is largely against most matters of interventionism.

So, from one Russian dupe to another (since the start of the Russian intervention in Syria I've probably quoted RT more than any other blogger) happy birthday, sir, and I pray for your long life and good health.