The last American helicopter out of Kabul 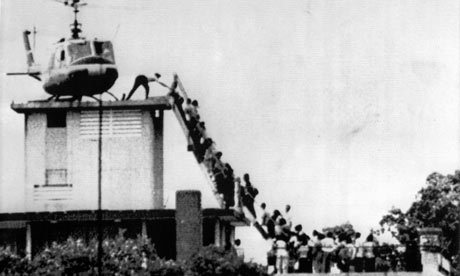 General Stanley McChrystal was barely out the door when the Obama administration gave the nod to America's two most influential newspapers that it was time to start telling the truth to the American public about the Afghanistan War.

Thusly, The New York Times mentioned in passing yesterday that Pakistan had been fighting a proxy war against the United States in Afghanistan:

... Pakistan is presenting itself as the new viable partner for Afghanistan to President Hamid Karzai, who has soured on the Americans. Pakistani officials say they can deliver the network of Sirajuddin Haqqani, an ally of Al Qaeda who runs a major part of the insurgency in Afghanistan, into a power-sharing arrangement.

In addition, Afghan officials say, the Pakistanis are pushing various other proxies, with General Kayani personally offering to broker a deal with the Taliban leadership.

Washington has watched with some nervousness as General Kayani and Pakistan’s spy chief, Lt. Gen. Ahmad Shuja Pasha, shuttle between Islamabad and Kabul, telling Mr. Karzai that they agree with his assessment that the United States cannot win in Afghanistan, and that a postwar Afghanistan should incorporate the Haqqani network, a longtime Pakistani asset. ...

Despite General McChrystal’s 11 visits to General Kayani in Islamabad in the past year, the Pakistanis have not been altogether forthcoming on details of the conversations in the last two months, making the Pakistani moves even more worrisome for the United States, said an American official involved in the administration’s Afghanistan and Pakistan deliberations.

“They know this creates a bigger breach between us and Karzai,” the American official said.

Though encouraged by Washington, the thaw heightens the risk that the United States will find itself cut out of what amounts to a separate peace between the Afghans and Pakistanis, and one that does not necessarily guarantee Washington’s prime objective in the war: denying Al Qaeda a haven.

It also provides another indication of how Pakistan, ostensibly an American ally, has worked many opposing sides in the war to safeguard its ultimate interest in having an Afghanistan that is pliable and free of the influence of its main strategic obsession, its more powerful neighbor, India.

The Haqqani network has long been Pakistan’s crucial anti-India asset and has remained virtually untouched by Pakistani forces in their redoubt inside Pakistan, in the tribal areas on the Afghan border, even as the Americans have pressed Pakistan for an offensive against it.

General Kayani has resisted the American pleas, saying his troops are too busy fighting the Pakistani Taliban in other parts of the tribal areas.

But there have long been suspicions among Afghan, American and other Western officials that the Pakistanis were holding the Haqqanis in reserve for just such a moment, as a lever to shape the outcome of the war in its favor.

On repeated occasions, Pakistan has used the Haqqani fighters to hit Indian targets inside Afghanistan, according to American intelligence officials. The Haqqanis have also hit American ones, a possible signal from the Pakistanis to the Americans that it is in their interest, too, to embrace a deal. ...

... The State Department and the U.S. Agency for International Development, which have quadrupled the number of civilians in Afghanistan in the past year, are still not confident of civilian capabilities. The Afghan government clearly cannot carry the burden.

So the administration is looking for a decent, negotiated exit. The Pakistani intelligence service would act as a surrogate (and guarantor) for the Taliban, as Slobodan Milosevic did for the Bosnian Serbs 15 years ago. The Americans would deliver Kabul. The deal might leave the Taliban in control of large parts of Afghanistan but keep al-Qaeda in Pakistan, where Islamabad would agree to deal harshly with its fighters.

Secretary of State Hillary Clinton has repeatedly enunciated her "red lines" for such an agreement: Taliban renunciation of violence and willingness to abide by the Afghan constitution (which guarantees women equal rights), as well as refusal to allow al-Qaeda or others to operate against the United States. ...

So let's get this straight. Pakistan's military promises to start dealing harshly with their asset al Qaeda if their other asset, the Taliban, were put in charge in Afghanistan.

What Pakistan's generals could offer in return was to allow American personnel to evacuate Kabul safely and cross their hearts and hope to die they wouldn't unleash al Qaeda on the Afghans until after the last American helicopter had left Kabul.

Ironically, before I learned about The New York Times report yesterday, I disagreed with The Glittering Eye's blogger, Dave Schuler, about whether Afghanistan could be considered another Vietnam. That happened while I was visiting Mark Safranski's Zenpundit blog. He'd featured two of my most recent posts on Pakistan and I'd joined the discussion about them at the Zenpundit comment section.

You are … get ready for it … refighting Vietnam. Last night on OTB Radio Pat Lang, James Joyner, and I agreed that’s a pretty fair characterization of the last 9 years. With Pat and I having lived through that period (he in harm’s way in Southeast Asia) we both find it pretty darned sad.

Dave, IMHO Afghanistan is not Vietnam although I understand the temptation to see it as such. The U.S. was not supporting the Red Chinese and Russian armies and collaborating with them while fighting their proxies in Vietnam, whereas the U.S. is going a long way toward supporting the Pakistani military and collaborating with it while fighting its proxies in Afghanistan.

There are several other key differences but in short Afghanistan is a unique situation for the U.S. military; they won’t be able to fully appreciate this until they confront Pakistan’s role and admit that to leave Afghans in the care of Pakistan’s military would be to set off a humanitarian disaster on a scale the rest of the world would not accept. And in these days of satphones, camera cell phones, and internet social networks there would be no way for the U.S. government to hide the atrocities. That, too, is another difference between Vietnam and Afghanistan.

If Americans throw up their hands and say we can’t afford to stay in Afghanistan forever — it won’t be forever, not with Afghanistan’s vast mineral wealth — but let this be a hard lesson that there are consequences to treating entire peoples as chess pawns, which is what Americans did to Afghans during the Cold War. The Pottery Barn rule does apply here, as it did in Iraq.

But another blogger, Lexington Green at Chicago Boyz, said it best:

This isn’t Vietnam because, unlike in Vietnam, we are supporting Diem (Karzai), building ARVN (ANA) and at the same time we are financing and arming the DRV (Pakistan), financing the Vietcong (Taliban), paying for the PAVN (Pakistani Army), and pretending that the country which is providing sanctuary to the VC (Pakistan) is our "ally."

We have been paying for both sides of the same war at the same time, while getting our own people shot on one side of it. If there is a strategic "most stupid" scenario, that may be it. If it were only as bad as Vietnam, it would be progress.

The one thing that was worse about Vietnam was we were sending draftees over there, getting them killed in droves, and pretty much blowing up our own society in the process. If Petraeus cannot restore some sanity, no one can. If he stays on the current course, we will lose, and Pakistan will win, and we will never have acknowledged who our real enemy was.

Well, Americans can be grateful that President Obama decided it was time for everyone to face up to reality. So I guess that means Dave gets the last word.