I believe the operative term is "quisling" 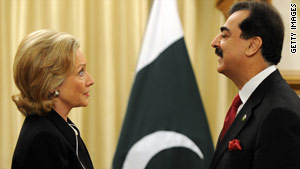 CNN - July 19: U.S. Secretary of State Hillary Clinton announced a major aid package for Pakistan on Monday -- with hundreds of millions of dollars pledged on projects to address the country's water and power shortage, and its floundering economy. ...

The projects, which Clinton called "long-term investment in Pakistan's future," include the construction of several dams, improvements to hydroelectric power plants and the country's power grid, and the construction or renovation of three medical facilities.

The United States will also invest $100 million to expand access to credit for small and medium-sized businesses, and provide $50 million to support investments in innovation and technology projects, she said. The projects will be funded by the Kerry-Lugar-Berman Act that authorizes $7.5 billion in development aid to Pakistan over the next five years.

... [Pakistani's tax] rules say that anyone who earns more than $3,488 a year must pay income tax, but few do. Akbar Zaidi, a Karachi-based political economist with the Carnegie Endowment, estimates that as many as 10 million Pakistanis should be paying income tax, far more than the 2.5 million who are registered.

Out of more than 170 million Pakistanis, fewer than 2 percent pay income tax, making Pakistan’s revenue from taxes among the lowest in the world, a notch below Sierra Leone’s as a ratio of tax to gross domestic product. ...

Much of the tax avoidance, especially by the wealthy, is legal. Under a 1990s law that has become one of the main tools to legalize undocumented — or illegally obtained — money made in Pakistan, authorities here are not allowed to question money transferred from abroad. Businessmen and politicians channel billions of rupees through Dubai back to Pakistan, no questions asked.

“In this country, no one asks, ‘How did you get that flat in Mayfair?’ ” said Shabbar Zaidi, a partner at A. F. Ferguson & Company, an accounting firm in Karachi, referring to an affluent area of London. “It’s a very good country for the rich man. Chauffeurs, servants, big houses. The question is, who is suffering? The common man.”

Then there are the tax-free goods supposedly meant for Afghanistan. Mr. Zaidi said much stayed in Pakistan illegally, including 50,000 tons of black tea that were imported last year. Afghans drink green tea.

“As per our information, not a single cup of black tea was drunk in Afghanistan,” he said. ...

[Akbar] Zaidi blames the United States and its perpetual bailouts of Pakistan for the minuscule tax revenues from rich and poor alike.

“The Americans should say: ‘Enough. Sort it out yourselves. Get your house in order first,’ ” he argued. “But you are cowards. You are afraid to take that chance.” ...

Now now, Mr. Zaidi, it's not helping anything to fling around wildly inaccurate insults. I always find that the more precisely one can describe a problem the more readily the solution presents itself. So let's see if we can't find a more descriptive term than "coward."

To the best of my knowledge, never before in the annals of warfare has a government aided and abetted an enemy force in the murder of the government's own troops and done this as a matter of policy. This is precisely what the American government has done, considering its collaboration with the Pakistan military, which supports Taliban that are making war on U.S. and other ISAF troops.

How to describe the kind of people who carry out such a policy? 'Coward' doesn't quite cut it, does it? Of course there's the all-purpose 'fiend,' but the term is so over-used these days and anyhow it's not very precise. Given that the situation I described seems unique it'd be nice if we could concoct a new term from the Latin or ancient Greek but I think we might make do with "quisling."

That might also be a fairly accurate term to apply to Graeme Lamb. From Patrick Cockburn's July 17 report for the (U.K.) Independent (via RAWA):

... With the war reaching a stalemate over the last year, Afghan and foreign leaders have prepared the ground for talks with insurgents by claiming they are more moderate and pragmatic than the Taliban government overthrown in 2001.

The head of the International Security Assistance Forces [ISAF] reintegration unit, Lt-General Graeme Lamb, said: "Who are these Taliban? They are local people. The vast majority are guns for hire; not fighting for some ideological reason."

The idea that the present day Taliban is less hostile to women than the old is contradicted by the experiences of women in Taliban-held districts. A report by Human Rights Watch – based on interviews with 90 women in districts largely held by insurgents in four different provinces – shows that women are being deprived of all rights.

The report, entitled The 'Ten Dollar Talib' and Women's Rights: Afghan Women and the Risks of Reintegration and Reconciliation, is released this week. It says the belief that new Taliban has emerged influenced by money rather than ideology is wrong.

It criticises the idea of the "Ten Dollar Talib" who fights for money, as an attempt by US and Nato forces to make power-sharing with them more palatable to western audiences who had previously been told they were an enemy to be defeated. Hostility to women is shared by other insurgent leaders as well as the Taliban. The strongest rebel force in the provinces south of Kabul is the Hezb-i-Islami, which Western and Afghan leaders have spoken of as a group that might be tempted to join the government.

The movement's leader is Gulbuddin Hekmatyar, whose first political act was reportedly to throw acid in the faces of unveiled female students at Kabul University in the early 1970s.

The HRW report is the first time that repression of women in Taliban- controlled areas in Afghanistan has been systematically studied. All the women interviewed – who are referred to by pseudonyms for safety reasons – said they had lost freedoms. In some cases, women have been killed.[...]

There was nothing to prevent Mr Lamb from ascertaining for himself what it took the HRW survey to bring to the fore, was there? But with POPCOIN (population-centric counterinsurgency) warfare a dismal failure in Afghanistan, it seems that the NATO command and the governments overseeing it decided that collaboration with the Taliban was the only recourse.

And yet there's something odd about the failure of POPCOIN in Afghanistan; you see, the basic tenet of the approach is that it first requires using adequate force of arms to provide security to the population.

If you say, 'That's what the troop surge Obama ordered is supposed to accomplish' -- that's what I assumed, until I read this passage from Mark Safranski's June 3 review of Sebastian Junger's book WAR, which documents a year Junger spent with the 2nd Platoon of Battle Company of the 173rd Airborne Brigade in Afghanistan's Korengal Valley:

What comes through in WAR, aside from the extremity of the terrain and the uncertainty of ever-present danger, men being shot without warning by the enemy ... is how very few men are actually involved in combat.

Battle Company is the vaunted “tip of the spear” but when only a few hundred men were taking a wildly disproportionate percentage of all combat contacts in a nation the size of Afghanistan (Junger cites 20 %) the spear begins to look more like a tiny sewing needle connected to a Leviathan-like noncombatant-administrative tail, surreally outfitted with fast food courts.

The observations caused me to recall Ann Marlowe's repeated assertions on John Batchelor's radio show in 2009 that from all she saw firsthand more combat troops weren't needed in Afghanistan; that instead the troops already in country needed to be better deployed.

An analysis of troop deployments is outside my purview but Marlowe's remarks; the passage I cited; and that odd business in 2007, when Afghanistan's secret service caught the British red-handed trying to set up training camps for Taliban fighters, raise the question of just how much enthusiasm there was on the part of ISAF to rout the Taliban.

This returns me to U.S. financial aid to Pakistan, and Sabrina Tavernise's report for The New York Times on taxes:

But behind the opulence lurks a troubling fact. Very few of these households pay income tax. That is mostly because the politicians who make the rules are also the country’s richest citizens, and are skilled at finding ways to exempt themselves.

That would be a problem in any country. But in Pakistan, the lack of a workable tax system feeds something more menacing: a festering inequality in Pakistani society, where the wealth of its most powerful members is never redistributed or put to use for public good. That is creating conditions that have helped spread an insurgency that is tormenting the country and complicating American policy in the region.

It is also a sorry performance for a country that is among the largest recipients of American aid, payments of billions of dollars that prop up the country’s finances and are meant to help its leaders fight the insurgency.

Though the authorities have tried to expand the net in recent years, taxing profits from the stock market and real estate, entire swaths of the economy, like agriculture, a major moneymaker for the elite, remain untaxed.

“This is a system of the elite, by the elite and for the elite,” said Riyaz Hussain Naqvi, a retired government official who worked in tax collection for 38 years. “It is a skewed system in which the poor man subsidizes the rich man.” ...