A Wall Street Journal report yesterday indicates NATO is still backing Ankara's claim that it shot down a Russian jet because it violated Turkish airspace:


Allies have been discussing how to help Turkey defend its airspace for years, but the talks gained new urgency after the downing of the Russian plane that NATO says briefly entered Turkish airspace.

Two physicists studied the data used by Turkey and Russia to justify their sides of the story. The physicists said both official versions are a scientific impossibility.

That would leave the third version -- the one given by the Russian navigator who survived the shoot-down.

So I'll start with the navigator's remarks then proceed to the physicists' discussion and finally I'll try to square the circle:

The navigator, Captain Konstantin Murakhtin, told reporters after he was rescued and returned to an air base Syria, that his aircraft never entered Turkish air space (Newsweek Nov 25):

The rescued pilot [navigator] denied Turkish claims that its military had warned the Russian jet 10 times in five minutes to leave Turkish airspace, according to TASS. He said that the jet never strayed outside Syrian airspace and that no warning was given.

"No, this is out of the question even for a one-second possibility, as we were at the altitude of 6,000 meters and the weather was clear," Murakhtin said in an interview Russia’s Rossiya-1 television channel.

"All our mission flight was in my personal full control until the explosion of the missile," he said. "There were no warnings either via radio communication or optically. There were no contacts at all. That’s why we flew heading combat course as per normal.”


“You have to understand what the cruising speed of a bomber is compared to an F-16. If they wanted to warn us, they could have shown themselves by heading on a parallel course. But there was nothing. And the rocket hit our tail completely unexpectedly. We didn’t even see it in time to take evasive maneuvers.”

He said there was no violation of Turkish airspace adding that the crew of the downed Russian bomber jet knew the area of the operation “like the back of their hands.”

A Nov. 25 RT report presents a slightly different version of his latter remark:


Murakhtin, who says he knows the mission area "like the back of my hand," also refuted Turkish officials’ claims that the pilots were warned repeatedly.

That makes more sense than the AT quote, given that Murakhtin was the one doing the navigating, not the pilot. So while the pilot may or may not have known the area like the back of his hand, the navigator claims he knew it very well.

I seem to recall that a later report at RT or another publication also quoted Murakhtin as saying that if the Turkish pilots had wanted to warn the Russian pilot, they could have 'sat on our tail,' but didn't deploy this standard maneuver, either. He stressed that the missile attack was a complete surprise.

Now to the physicists:
From the (U.K.) Independent by Caroline Mortimer; November 28, 2015:


Two Belgian astrophysicists have questioned both the official accounts of how a Russian military plane was shot down by Turkey on Tuesday.

Writing a blogpost for their university, Katholieke Universiteit Leuven, Dr Tom van Doorsslaere and Dr Giovanni Lapenta, said the plane could not have gone down the way either country said it had.

The Russian warplane was shot down by Turkish authorities on Tuesday and crashed a few miles into Syria.

Turkey said it gave Russia 10 warnings about violating its airspace before firing but Russia has dismissed these claims as “rubbish”.

After watching a video of the incident which was posted online Dr van Doorsslaere and Dr Lapenta said according to their calculation the plane was travelling faster than Turkey said it was.

Turkey said the plane was in their airspace for 17 seconds but the physicists concluded that when travelling at a speed of 980 km/h (609 m/h) the plane would have crossed over in just seven seconds.

From this they said it was extremely unlikely they issued ten warnings in five minutes because the plane travelling at that speed could cross 80km (50m) in 80 seconds.

They said: “How could the Turkish airforce predict that the Russian jets were about to enter Turkish airspace?

“Military jets are very agile, and in theory the Russian jets could have turned at the last moment to avoid Turkish airspace.

“The warnings issued to the Russian pilots were mere speculation at the moment they were made.”

But they don’t think Russian authorities are being entirely honest either.

Russia has claimed the plane made a 90 degree turn after it was hit and it was actively trying to avoid Turkish airspace.

They explained that at that speed: “A change of course of 90 degrees can only be achieved with an object that’s many times heavier or faster than the jet.”

They concluded: “According to our calculations, it is clear that both the story of Turkey and Russia should be taken with a grain of salt.

“Estimates limit the violation of Turkish airspace to a maximum of 10s. Russia's claims not correspond to the laws of mechanics.”

A map released by Russian authorities purporting to show where the plane made a 90 degree turn: 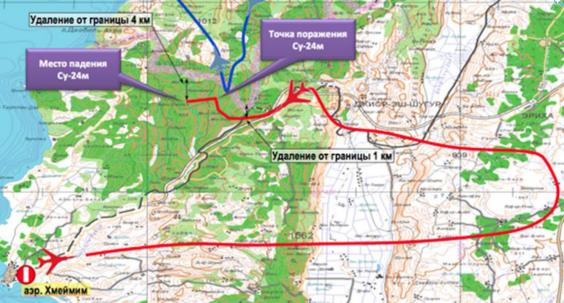 Now why would the Russians put out hogwash in answer to Turkish hogwash?  I have not gone to the trouble of nailing down the exact timeline of events but the operation to rescue Murakhtin took 12 hours -- and during much of that time, the Russian military didn't know whether he would live or die. And it wasn't until he was returned and debriefed that they learned for certain what had happened in the air.

But during that time, the Turkish Prime Minister, Ahmet Davutoğlu, who publicly claimed to have personally ordered the strike on the Russian jet, sprang into executive action. This included firing off a letter to the United Nations claiming that the Russian plane had been in Turkish airspace for 17 seconds -- a letter that of course was quickly leaked.

From many quarters, not only the physicists, the claim doesn't hold water. That's because logic dictates that if the jet was in Turkish airspace 17 seconds, this wasn't enough time to issue 10 warnings.

However comma the Russians, knowing full well that he who hesitates is overwhelmed by the first headlines, immediately retorted to the Turkish claim with their own version of events, which included the 90-degree change of course story.

(If I recall correctly, the Russians eventually revised their story to comport with the navigator's, asserting that the aircraft had never been in Turkish airspace).

All this said, there is one problem with the physicists' analysis. They wrote, “How could the Turkish airforce predict that the Russian jets [sic] were about to enter Turkish airspace?"

The Turkish military didn't necessarily need to attempt to predict. As part of the "deconfliction" agreement between the USA and Russia, the Russian military gave the U.S. military the flight pattern of all Russian aircraft in Syria, including the one that was shot down. That was something President Putin mentioned in public after the incident.

So the American military would have known the exact time a Russian aircraft was flying very close to the Turkish border and the coordinates of the flight. Would they have shared the data with the Turkish military -- another NATO member?

There are persistent rumors, which John Batchelor mentioned last night during his conversation with Stephen F. Cohen, that American F-15 aircraft were spotted in the same area where the Russian jet was shot down and at the same time.

And there is the fact that Syrian "Turkmen rebels" happened to be in position to shoot at the Russian pilot and navigator just as they parachuted from the stricken jet -- which had been hit by a precision guided missile in the tail; i.e., just enough to force the Russians to abandon the craft.

Then there are the anecdotal accounts:

One from a Syrian officer who said the rescue team had luck because "the Turks and the Turkmen" fell to squabbling with each other about what should be done with the navigator.  That bought the team a little time, as they raced to trace the navigator's radio beacon.

And there is the account of the leader of the Syrian Turkmen who ostensibly shot at the Russians parachuting from the aircraft. It looks as if he wanted his 15 minutes of fame because he allowed his boasting and visage to be videotaped.

He was quickly identified from the video. That was no Syrian. Not only was he a Turk, he was also a member of the dreaded Grey Wolves ultranationalist terrorist organization. Which, as Tony Cartalucci explained in detail in September during the Erawan Shrine bombing investigation, was set up by NATO including the United States of America.

Well, what can I say? It was the Cold War.

The problem being that the Grey Wolves did not disband when the Soviet Union dissolved. Reference the mujaheddin who morphed into al Qaeda, and several other American bright ideas during the Cold War that tend to put the adage, "In the long run we're all dead" in another light. 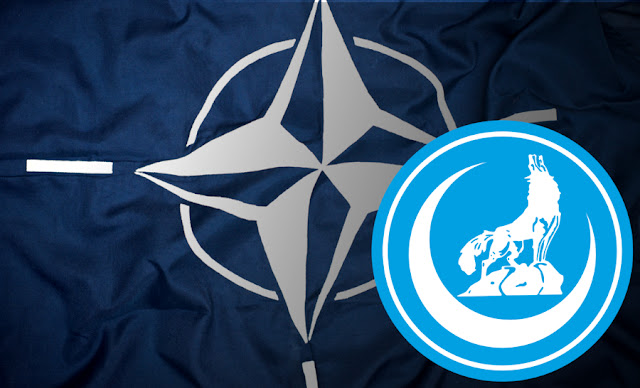 Tony's caption for the graphic:


NATO created and funded the Grey Wolves terrorist network during the Cold War as part of its 'stay behind' networks. Instead of fighting non-existent Soviet invaders, they were used instead to kill NATO's political enemies by the thousands. Today, the Grey Wolves are represented by the Nationalist Movement Party (MHP), the third largest in Turkey's parliament. They are reported to operate globally, including terrorist training camps in Xinjiang, China.

Is there any way to save this situation? We might get the answer at 12:00 GMT today, which is when the Russian military will hold a press conference on its "counterterrorism findings." God willing RT will be able to carry the presser live on its website with English translation.

Or we could get the answer a few hours earlier or later than the presser. Maybe it will come down to how Turkey's President Recep Tayyip Erdoğan intended Russian President Vladimir Putin to read the large floral arrangement from Turkey that accompanied the murdered Russian pilot's casket back to Russia.

There would have to be a sacrificial goat, you understand. Would that be Davutoğlu? Don't know. Have a nice day!

Now I must practice my wolf calls in hope this will give me some insight into Turkish politics. Ahooooooooo yip yip ahooooooo!