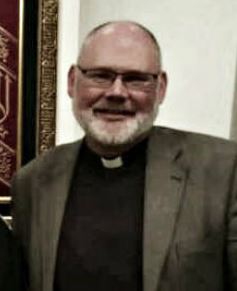 "Why is it, given that stories about massacres by the Syrian Army are headline news worldwide, and several international media units are in Aleppo, that there is not one international media agency actually at the Registration Centre talking to the refugees themselves? We were the only ones there."

I think the good Reverend is too polite to write what I did in the title; instead, he confined his criticism to "Western" media. But by the time you finish reading his account it won't take imagination to guess what he thinks of his government's utterances about Syria. After all, much of what the media report about the Syrian war is quotes from government sources or a parroting of the quotes.

I note that I don't belong to Facebook, where he published his account, so I took if from another website and republish it in full below, minus the photographs.

I'll also note, because he doesn't mention it in the account, that the December trip he describes was not his first visit to Syria. He'd been there last in November 2015 for his doctoral research on Syrian Christian-Muslim relations. But I think it was his prior observations in the country that alerted him he might not be getting the truth from the British and other Western media about the situation for E. Aleppo residents.

At any rate, he decided to make a surprise visit to see things for himself, and without notifying the Syrian government of the true intent of his trip.  Here is what he found:

ALEPPO: THE TRUTH THAT THE WESTERN MEDIA REFUSES TO REPORT
DECEMBER 15, 2016

Andrew Ashdown is a Church of England priest studying Christian-Muslim relations in Syria. In the last few days he has visited East Aleppo. This is the report of his visit to the area yesterday (14th December) that he published on his Facebook page. (Photos by Andrew Ashdown):

This morning we visited the main IDP Registration centre at Jibrin for Internally Displaced Persons from East Aleppo. They are registered here for humanitarian reasons and access to services before they go either to relatives in other parts of Syria if they have them (many do), or to other reception centres where they are provided with accommodation, food and other services.

During the past two weeks they have registered 95,000 refugees but estimate there may be a further 10,000 who have not registered. There were thousands of people there who have arrived within the last couple of days.

Let me make clear that we visited in a taxi without Government or Army accompaniment, and without prior notice. We were not expected.

The Centre is well organised. The Syrian Red Crescent have tents available that offer information about all social welfare facilities available, and offer free medical attention. In cases of emergency, ambulances are on hand to transport patients to hospital. Free food is being distributed by the Syrian Red Crescent and the Syrian Army, and we saw a convoy of Russian lorries [delivering] aid. There is also a Russian field hospital on site which offers immediate medical treatment.
The sense of relief amongst the thousands of refugees is palpable.
All were keen to talk, and we interviewed several who had arrived only yesterday and today. They all said the same thing. They said that they had been living in fear. They reported that the fighters have been telling everyone that the Syrian Army would kill anyone who fled to [Western Aleppo], but had killed many themselves who tried to leave – men, women and children.

One woman broke down in tears as she told how one of her sons was killed by the rebels a few days ago, and another kidnapped. They also killed anyone who showed signs of supporting the Government. The refugees said that the ‘rebels’ told them that only those who support them are “true Muslims”, and that everyone else are ‘infidels’ and deserve to die.

The refugees told us they had been given very little food: that any aid that reached the area was mostly refused to them or sold at exorbitant prices. Likewise, most had been given no medical treatment. (A doctor who has been working with the refugees for weeks told me last night that in an area recently liberated, a warehouse filled with brand new internationally branded medicines had been discovered.)

Most of the refugees said they had had members of their families killed by the rebels and consistently spoke of widespread murder, torture, rape and kidnap by the rebels. They said if anyone left their homes, their properties and belongings were confiscated and stolen.

One old man in a wheelchair who was being given free treatment in the Russian Field Hospital said he had been given no treatment for three years despite asking. He said: “Thank God we are free. We now have food. We can now live our lives. God bless the Syrian Army.”

We asked if the Syrian Army had ill-treated anyone. They said never. One woman said: “They helped us to escape and they provide us with food and assistance.”

I therefore have two key questions:
1. It is now only the Syrian Red Crescent, the Syrian Army, and the Russians who are providing humanitarian aid to the tens of thousands who have fled East Aleppo. Why are none of the international agencies offering to help them now?
2.  Why is it, given that stories about massacres by the Syrian Army are headline news worldwide, and several international media units are in Aleppo, that there is not one international media agency actually at the Registration Centre talking to the refugees themselves? We were the only ones there.
Here are people who have lived through it who are keen to talk, yet the media take at face value unverifiable claims by highly dubious sources. The collapse of any form of reliable investigative journalism in a context of global significance is utterly shocking.
Today the agreement for 4000 fighters to leave Aleppo is reported to have collapsed after the fighters had refused to fulfil the agreement. (I don’t know the details, but think about it -- there is no reason on earth why the Syrian Government would want this agreement, which would involve the complete liberation of the city, to fail!) It is reported that the fighters refused to leave or let the civilians do so.
The refusal of the western media to report objectively, or to seek informed information from the thousands of civilians from East Aleppo who are keen to share their stories, whilst granting full credibility to terrorists without any on the ground verifiable information on their claims, is nothing short of obscene.
Everything that I have seen and heard in Aleppo; from civilians in East and West from all communities, and from talking with doctors, faith communities and with Army people as well, and witnessing and risking bombardments on both sides, convinces me that the reports in the western media are twisted fabrications of the horrors that are happening in ‘rebel’ controlled areas. And still, the media refuses to listen to the witness of the people themselves.
Postscript: Christmas is coming in Syria. In a country and a city in which people of all faiths are free to worship; where mosques and Churches stand side by side; and where Christmas music is playing in cafes and restaurants. And yet the world is mourning the defeat in Aleppo of extremists who destroy Christian and Muslim places of worship, and slaughter any who do not follow their obscene ideology.
[END]