The "Basta Dobbs!" campaign and the targeting of Lou Dobbs and CNN by a bunch of hypocrites 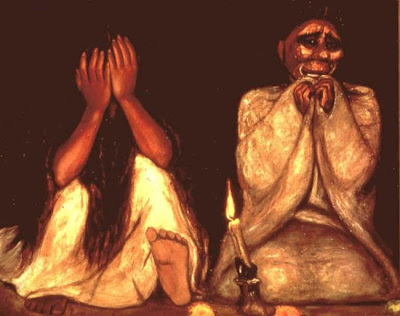 I think I told readers the story years ago -- how, as a small child accompanying my mother on her frequent visits to Mexico, I began to ask questions about the contrast I noted there between the most awful poverty and the great wealth in the country. Once, after seeing a church with a large amount of gold statuary, I asked why the church didn't give the gold to the poor. When I didn't receive a clear answer I announced that I would never again visit Mexico, and I never did.

In the decades since, after I learned that the United States government, with the full backing of the American people, supported the Mexican regime and ruling class that condemned millions of Mexicans to poverty and apartheid, I became philosophical. I had crossed paths with so much evil by then that even dogs and small children, who'd loved to be around me in my youth, instinctively backed away. At least Mexico's government didn't practice population control by routinely rounding up tens of thousands of teenage males, shipping them to a plantation, and slaughtering them. Americans wanted Mexico's oil and Mexico's cheap labor; if that meant looking the other way while their government propped up Mexico's oligarchs, crueler things happen in this world.

But I underestimated the stupidity of Mexico's ruling class and the Americans who supported the government-sponsored industrialization of remittance payments. Thus, March 2005 found me shouting a warning in a post titled Why Vicente Fox is going straight to hell:

Western governments are studiously blind to the connection between diaspora remittances, narco states, terrorism, and the plight of the world's poorest. The US State Department (and the Bush administration) crowed about an initiative under the US-Mexico partnership, which makes it cheaper for poor Mexican immigrants working in this country to send remittances back home. Why don't they just line up Mexico's poor and shoot them? Oh but that's right, Pundita forgot! If you shoot them, you can't bleed them dry.

In time with the streamlining of remittance transactions, Mexico's government had started an official program to encourage Mexicans working in the United States to send remittance payments. This allowed Mexico's oligarchs to continue staving off paying taxes. But the bulk of the remittances was being used by Mexican recipients just to put food on their table.

I had warned readers in late 2004 that America was on shaky ground economically and that hard times were inevitable and not far off. In a series of posts in 2005 that followed my frantic warning about remittances, I asked what would happen to Mexicans who depended on remittances for basic necessities if there was a severe economic downturn in the United States.

The answer exploded in headlines in 2009, as Mexico became engulfed in the worst gang violence in memory and the country became a major hub for human trafficking. What didn't make headlines was the rise of private militias in the country, the growing presence of Hezbollah operatives there, and the hint that drug gangs were borrowing tactics from the Naxals.

But as the gang wars spilled over into the US border regions Americans asked, 'Where did all this violence come from?'

Well, humans don't take to starvation if they can find a way to avoid it -- a lesson not learned by the American government in Iraq. In the wake of a severe recession in the USA, which laid off hundreds of thousands of Mexican immigrant workers or severely curtailed their work hours, remittances dried up. The upshot was that Mexico descended into something like Iraq's post-invasion phase, which saw thousands of unemployed Iraqi men keeping their families from starvation by setting IEDs, at $50 at pop, for al Qaeda and the Baathist insurgents.

In the same manner, as America's recession settled in, many starving Mexicans who could no longer depend on remittances gave up their law-abiding ways; they joined drug gangs and started new gangs, which launched turf wars that were so horrific the Mexican military had to be called up.

What was the response from the USA? The government tossed a few billion dollars into the bottomless pit of Mexico's corrupt government and offered to loan a few billion more so Mexico's military could purchase a couple Blackhawk helicopters. And self-styled human rights activists, and politicians backed by agribusiness, redoubled their efforts to advocate for illegal Mexican immigrants and immigration reform that would provide amnesty for all illegal immigrants in the United States.

This fall, the activists turned their sights on CNN and CNN's advertisers, in the effort to have Lou Dobbs removed from the cable channel. They accused CNN of hypocrisy for reaching out to the 'Latino' community while at the same time airing Dobbs's program, which they accused of promoting hatred against Latinos and Latino immigrants.

[J]ust as Dobbs is free to gin up anti-immigrant sentiment, we are free to educate our community about his impact, call out his pattern of fear mongering and faulty reporting.

And that is exactly what Latinos and our allies are doing. The BastaDobbs.com campaign is bringing together groups and individuals organized in the 25 U.S. cities with the largest Latino populations to show Dobbs for what he is: the Most Dangerous Man for Latinos in America. We are exercising our free speech rights to demand that CNN live up to its claim to be "most trusted name in news."[...]

The Basta Dobbs! website features a list of organizations that have rallied to the cause. Thinking back I can't remember any names on the list that received publicity for protests against the American government's decades of complicity in the rape of Mexico's poor. Nor do I recall any of those names, or Mr Lovato's name, associated with protests against Mexico's government.

Indeed, thinking back over decades, I can't recall any march on Washington, any U.S. labor union rallies, any pickets in this country, about the actions of Mexico's government toward their nation's poor and the country's indigenous population, which is not Latino.

If anyone can find even one article published by any of the organizations listed at the Basta Dobbs site that takes Mexico's government to task for their treatment of Mexico's poor, or which points out that the government has been getting away with murder by encouraging Mexico's poorest to immigrate to the USA, please send it to me.

And if anyone can find an article written by an American or 'Latin-American' activist that excoriates American agribusiness, and all American employers of Mexican immigrants, for their hypocrisy and complicity in propping up Mexico's oligarchs, please send it.

I could continue in this vein but let's cut the crap. Hell will freeze over before you see any American politician or Latino activist group in the USA decrying the need for Mexicans to find work in the USA.

If the activists want to accuse CNN of hypocrisy, why don't they ask the company's executives if they'd produce a series on corruption in Mexico's government and apartheid in southern Mexico -- where the indigenous population can't even walk on the same sidewalk as the descendents of the 'Latino' Conquistadors? Oh but that's right I forgot; executives at CNN International, and their sponsors, would have a heart attack if an American TV news organization embarrassed Mexico's rulers.

In this world the big fish eat the little fish, so I understand that Americans who demand cheap labor don't care that they profit from the misfortunes of Mexico's poor. I even understand that they want to slap a fig leaf on their greed by lobbying for better treatment of Mexican immigrants.

What I don't understand is why 'Latin American' activists have never followed in the footsteps of the refugees from Soviet oppression, who once landing on these shores gave the U.S. government no peace until the Soviet Union fell.

For any twelve-year olds who've wandered into the discussion, South Africa wasn't providing the USA with oil and neither was it providing Americans with a limitless supply of dirt cheap labor. That's why it was politically correct for America's human rights activists to protest apartheid thousands of miles away but to say not a word about what was happening next door.

As for Lou Dobbs -- I don't watch his show enough to know whether he needs better fact-checkers but from what I've seen, his show is the only regular source on news from Mexico for American audiences; it's not much news, and it's all unpleasant news from what I saw, but it's more than all the other US networks combined produce about Mexico.

Why is that? Why do American news broadcasters have such a hard time finding Mexico on a map? Could it be that talking too much about Mexico will bring forward the question of why so many Mexicans flee here, despite Mexico's oil wealth? And why so many Americans continue to avoid learning the detailed answer?

And could that be the problem, do you think, for Lou Dobbs? Again, I haven't seen the show much -- only a handful of times this year. So perhaps a reader who tunes in daily could let me know whether he presented any reports earlier this year that would have given Mexico's oligarchs or the Mexican government a hissy fit. Or if he presented so much coverage on violence in Mexico that this would have bothered the U.S. Department of State and Homeland Security.

If the latter is the case, I'd suggest to State and Homeland that they start facing reality about Mexico, then communicate the truth to the Obama administration and Congress.

It's going to take more than a fleet of Blackhawk helicopters to put down a Naxalite-style rebellion if it gets underway in Mexico; if you won't take it from me, take it from the Indian government or Shlok Vaidya.

I think Shloky, who keeps a close eye on the Naxals, would surmise that their tactics are cycling into Mexico's drug gangs through the gangs' contact with drug-dealing Muslim terrorist/insurgency organizations working in Mexico.

In any case: for now, the Mexican gangs are about profit. Tomorrow might not be the same story.

At one point President Bush told Vicente Fox, while Fox was Mexico's President, that he needed to raise taxes on Mexico's rich. Andrés Manuel López Obrador, who claimed the last presidential election was stolen from him, said it wasn't necessary to raise taxes, just get the rich to pay them.

López Obrador doesn't want Mexicans immigrating to the USA to find work; he considers that a national humiliation and an indictment of Mexico's ruling class. Part of his political platform was to get Mexico's rich to pay up on their taxes and from that create jobs so Mexico's poorest didn't have to find work in the USA. For that kind of talk the US government branded him a dangerous, unhinged communist demagogue.

And no matter how hard I try, I cannot recall any Latin-American activists, or any American activists at all, rising up to argue with that view of López Obrador.
****************
This entry is cross-posted at RBO; the painting Brenda chose to accompany it says it all, so I am adding it here. The painting is by Francisco Bollaín y Goitia García (1882-1960): In Goitia’s later life, he worked as a professor at The Academy of San Carlos and studied indigenous groups of Mexico.
Posted by Pundita at 11/05/2009 10:14:00 AM

I would never again visit Mexico, and I never did. its trouble negative power there is too horrible for me.