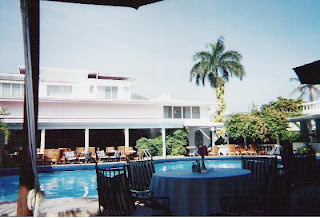 Many years ago, whenever calamity broke out somewhere in the world, I fell into the habit of adopting a journalist who'd rushed headlong into the worst of it. I pounce on every report the journalist files and wait impatiently for the next one. Until now I never stopped to wonder why I do this; I suppose it helps me personalize the victims of the calamity by giving me a particular stranger's welfare to worry about.

The adoptee for the Haiti earthquake is Reuters veteran journalist Andrew Cawthorne. His view of situations he's encountered since his mad dash to reach Port au Prince before nightfall gives his reports from Haiti the tone of a hitchhiker's diary.

This morning Andrew wrote about Villa Creole, the hotel where he and several other journalists and aid workers are staying. The generosity of the hotel's owner, who's letting everyone stay for free, and the hotel's almost magical ability to keep functioning in the midst of chaos, evoke memories of the Mille Collines, the model for the hotel in "Hotel Rwanda."

The 74-key, 3-star Hotel Christopher, which served as headquarters for the United Nations Stabilization Mission to Haiti, collapsed in a pile of rubble when the earthquake struck. The same happened to Karibe Hotel, which also housed UN workers, and the 98-year-old Hôtel Montana, a 145-key, 4-star tourist hotel, which was popular with French tourists.

About 200 United Nations staff were inside the Christopher when it collapsed; at least 36 have been confirmed dead and about 150 remain missing. Alain Joyandet, an official with France's State Department, said on Wednesday that 300 people were believed to be inside the Hôtel Montana when it collapsed and that only about 100 had been accounted for.

Late yesterday a French search team pulled two American survivors from the Montana's rubble: Sarla Chand of New Jersey and Richard Santos of Washington, DC. Richard is president and CEO of IMA World Health Organization and Sarla is the organization's vice president of international programs. The French team went on to attempt to free several other apparent survivors, "many" of them believed to be Americans, according to ABC News.

ABC also reported that late Thursday afternoon the U.S. Department of State confirmed one American death: 57-year-old Victoria DeLong, a cultural affairs officer at the U.S. Embassy in Port au Prince who had been stationed there since February 2009. She'd joined the State Department in 1983.

This morning the Guardian's Matthew Weaver reported from London that "five people, including three Americans" had been rescued from the Hôtel Montana, according to a jubilant Tweet from 'Fireside Int,' who has been posting regular updates from Haiti since Tuesday.

Haiti has been forever changed; there is now so much of the world's attention on the country it won't be allowed to wallow in its miserable existence prior to the January 12 earthquake. But between now and a corner turned in the lives of Haiti's survivors there are at least 40,000 Americans who need to be tracked down in the country and the survivors evacuated. Most poignantly, many of the Americans were in Haiti on a mission of mercy: to help the earthquake-ravaged country totter back onto its feet.

The Thursday ABC report noted that an American named Rudy Bennet is trapped in the rubble of the Hôtel Montana, and that he'd been texting relatives in the U.S. No word yet on the names of the American survivors Fireside Tweeted about.

Another day has dawned in Haiti. It's going to be another day of hell to live through, another day of hell to watch from afar. But what I took from the movie "Hotel Rwanda" is that if one's fortunate enough to find a good hotel in hell, the least one can do is stay engaged with what's going on and maintain a stiff upper lip.
****************************
See also my January 12 post Haiti Earthquake with 23 (or 24) updates. I decided it was time to start a new post after I lost track of the number of updates. Brenda at RBO added a zillion or so videos to her crossposts of all the updates. Between us we managed to chronicle our impressions of the first 48 hours of the earthquake's aftermath.
Posted by Pundita at 1/15/2010 07:02:00 AM

I was telling Ching last night that all the pics and footage on the news doesn't move me much - I just see it as propaganda. But reading accounts by people there, everyday people, really moves me. This was the same after 9/11 and what got me into blogs.

Thanks for all the updating you're doing!

Happy New Year to you as well! Both still blogging -me barely! It's a sick sad world most of the time, all we can do is take care of our own and as many others as we can and try to be a light in the dark!