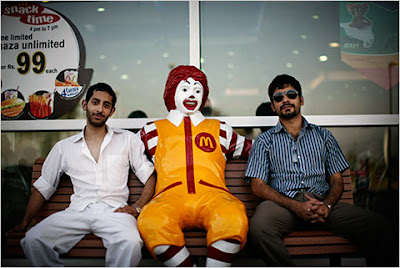 ISLAMABAD, Pakistan -- An Internet clampdown in Pakistan widened Thursday as the government blocked access to the YouTube Web site, citing its "growing sacrilegious content." The move came one day after the civilian government ordered Internet service providers to restrict access to the Facebook social networking site, which drew fire in Pakistan over a page encouraging people to post caricatures Thursday of the Prophet Muhammad. That order followed a court injunction against the site, which agreed Wednesday with a petition by an Islamic lawyers' group that the page violated Islamic laws banning the prophet's image. [...]

The Post report tactfully avoids mentioning the penalty in Pakistan for caricaturing or otherwise insulting the Prophet, which is death.

Pakistan has the most stringent blasphemy law of any nation, and the death penalty extends to even an inadvertent or 'perceived' insult to the Prophet. Although countless vigilante-style executions have occurred, the penalty has never been carried out within the judicial system. Of course; if the death penalty was carried out the usefulness of the law, as a weapon of fear, would have collapsed under the weight of protests abroad and rebellion inside the country.

That is why all diplomacy initiatives by the United States and other national governments to pressure Pakistan's government into watering down the law have so far failed. Imposing the death penalty for blaspheming Mohammad, even inadvertently, has been an effective means of sustaining a climate of fear in the country. That's helped the military and the elite control the rest of the population.

A couple examples, drawn from Wikipedia's article on Pakistan's anti-blasphemy law, are ample indication of how the law creates a climate of fear:

In October 2000, Pakistani authorities charged Younus Shaikh, a physician, with blasphemy on account of remarks that students claimed he made during a lecture. The students alleged that, inter alia, Shaikh had said Prophet Mohammed’s parents were non-Muslims because they died before Islam existed. A judge ordered that Shaikh pay a fine of 100,000 rupees, and that he be hanged. On 20 November 2003, a court retried the matter and acquitted Shaikh, who fled Pakistan for Europe soon thereafter. ...

On 4 August 2009, a Muslim mob attacked a factory-owner by the name of Najeebullah and others at Sheikhupura in the Punjab. The mob killed Najeebullah and two others, and set fire to the factory. The mob complained that Najeebullah had placed an outdated calendar, which contained verses from the Quran, on a table. For that offense, a worker accused Najeebullah of blasphemy. The workers may have been in a dispute with Najeebullah over wages.

The tally Wikipedia cites for the number of blasphemy charges officially brought between 1988 and 2005 -- 647 -- does not convey the true situation. Official charges don't have to be brought to warp the society.

If you read through enough of the blasphemy cases, it's clear the accusations relating to the law are often a pretext for anything from grudge-settling to wage disputes to land grabs. Invoking the law is a sure-fire way to bring the threat of social ostracism, loss of employment, financial ruin, or even worse on any Pakistani who stands accused. So, just the threat of being publicly accused of blasphemy against the Prophet is enough to create a kind of reign of terror.

Not content with terrorizing citizens in their own country Pakistan's regime wants the entire world to live in fear. Since 1999 Pakistan has led the charge at the United Nations to make blasphemy an international crime.

Insulting the Prophet isn't the only way to run afoul of Pakistan's blasphemy law:

The Pakistan Penal Code (PPC) and the Criminal Procedure Code were amended, through ordinances in 1980, 1982 and 1986 to declare anything implying disrespect to Muhammad, Ahle Bait (family of the prophet), Sahaba (companions of the prophet) and Sha'ar-i-Islam (Islamic symbols), a cognizable offence. ...

* Disrespecting the Holy Quran is punishable by life imprisonment.

* Deliberate and malicious acts intended to outrage religious feelings of any class by insulting its religion or religious beliefs bring up to 10 years imprisonment, or fine, or both. ...

The catch is that the climate of fear combined with rigid enforcement of the caste system, a public education system that instills paranoia and hate, a police state with eyes and ears everywhere, and the preservation of an ancient system of feudalism that no longer exists anywhere but in Pakistan has created a nation of people whose mindset is very close to sociopathy.

Pakistan's elite represent a tradition of rulers who were treated by their subjects as living deities; when that was coupled with the most rigid form of caste consciousness it produced a way of thinking that Americans would consider crazy -- if they understood it. Because the thinking is unique in the modern world it is very hard to describe in a few words, in a way that can be understood by moderns.

And the eggshell-thin class of liberal minded, more 'secularized' Pakistanis who place a high value on human rights, which is the face Pakistan's government likes to project to the world, makes the society even harder to comprehend from the outside.

How do those liberal-minded Pakistanis live in such a society? How do women who routinely get the shit beat out of them by their husbands stay in the marriage and put on a happy face for the world? In both cases, through a schizoid dissociation from reality.

That's why there is such a large Pakistani diaspora. This has only made things worse in Pakistan because many of the best and the brightest -- those the country most needs -- have fled.

So when I wrote in an earlier post that Pakistan was the most toxic society on earth I wasn't exaggerating or being mean. If I'd wanted to be mean I would have written that Pakistan is the true America, in the manner of Dorian Gray's portrait revealing the true man.

But at the very least, the American taxpayer has unwittingly helped prop up a way of life that reflects the worst of the modern and ancient worlds. I don't want to hear about the role the British and the Saudis have played in this. The British couldn't afford to keep Pakistan as a client state, and the Saudis came late to the party.

Across decades, from the inception of Pakistan as a nation, the U.S. government has knowingly helped Pakistan's regimes suppress human rights and real democracy in the country, carry out terrorism against India, inflict democide on their own people (East Pakistanis) and Afghanis. To top if off, the U.S. government deliberately turned a blind eye to Pakistan's nuclear weapons proliferation and did so for decades.

Yet this same American government has had the gall to lecture other nations about human rights and democracy. And the stupidity to wonder how many more men like Faisal Shahzad are in Pakistan.
****************
UPDATE 3:15 PM EDT
Excerpts from Bloomberg report:

Pakistan's government has blocked 450 Web links as the government widened a crackdown on Internet material it deems blasphemous.

The sites and links were blocked because of the increasing level of sacrilegious and derogatory material, the Islamabad- based Pakistan Telecommunication Authority said in a statement today. The regulator, which shut access to Facebook Inc.’s website yesterday, may block other links with blasphemous content, Khurram Mehran, a spokesman, said.
[...]
Pakistan said that Facebook and YouTube violated a resolution endorsed by the United Nations.

“The attitude of administrators at Facebook and YouTube was in contravention to the WSIS Resolutions and their own policies advertised on the Web for general public,” Mehran said in the statement, referring to the World Summit on the Information Society endorsed by the United Nations. “PTA would welcome the concerned authorities of Facebook and YouTube to contact the PTA for resolving the issue.”

The telecommunications regulator blocked Facebook after the Lahore High Court imposed a ban and the Ministry of Information Technology instructed it, according to Mehran.

The court petition to bar Facebook was filed by a lawyer representing the Jamaat-e-Islaami, the party’s spokesman Sarfaraz Ahmed said in an interview today.
[...]
Today’s shutdown is within the Constitution of Pakistan and is an extension of orders from the High Court of Pakistan and the government’s directions, Mehran said. The regulator has set up a telephone number for callers to notify it regarding websites with objectionable material, according to the statement.
[...]
Pakistan’s Internet traffic has fallen 25 percent since [Facebook and YouTube] websites were blocked, CNBC Pakistan reported. It didn’t cite a source for the data.

Good post. I agree with all of it except for this sort of thing:

"If I'd wanted to be mean I would have written that Pakistan is the true America, in the manner of Dorian Gray's portrait revealing the true man."

Madhu -- Thank you, and thank you for reading the post. Your comment caused me to reflect that I have not taken things far enough in the effort to shake my fellow Americans out of their wilful blindness to U.S. machinations in Pakistan and other countries. So what I'm going to do is feature your comment and my full reply in a subsequent post. This, finally, might be taking things far enough. I'll alert you in this comment section when the post is published.

Oh no, I actually agree with you. I think our entire aid structure is delusional - Africa, SA, you name it. It makes no sense and often just props up corrupt regimes.

And I bet the majority of everyday Americans think so, too.

This is a strategic blindspot of OUR POLICY MAKINE ELITE, and in that sense, shaking the tree will have to keep that in mind :)

If you shake the tree in the wrong way, you will get the wrong fruit to fall.

Eh, you are a better writer than me. Write away :)

What the heck is wrong with our elite, anyway? Why can't they see clearly? I'd love to see a post about that!