Coffee house in Cairo, "the city that never sleeps" 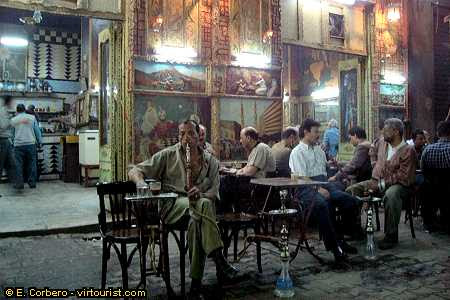 Forget New York, Cairo literally never sleeps. Few other cities in the world have delivery services 24/7: it's completely normal to have pizzas, drinks and even movies delivered or to go for a shawerma snack at My Queen as late as four in the morning. Pharmacies deliver no matter what time of day, and there's always a doctor that will make house calls. With summer nights long and hot, it is entirely common to see families filling up the parks at midnight or eating in restaurants until the wee hours of the morning. Even the city's nightlife lasts until the early hours of the mornings: bars, nightclubs and shisha places really only pick up just before midnight, and cabarets usually open around 1AM, keeping the heart of Egypt beating around the clock.

I decided not to wait until the weekend to add links to the post; they're now added. I also wrote several paragraphs that expand on my discussion in the first published version of the post. And I added a "Notes" section at the end, which I think readers new to Egypt's situation will find helpful.

I want to thank the writers at American Digest, A Tangled Web, and Jaded Haven who highlighted the Egypt post at their blogs, and Marina and other readers who mentioned it at other websites, and everyone who commented. Thanks too to "Grammar Guy" for reminding me about the difference between staunch and stanch.

And finally, thanks to AP's Cairo Bureau Chief, Hamza Hendawi, whose January 19 report on Gamal Mubarak set me in the right direction at the start (see the Egypt post) and acted as a guidewire through the thick fog that reporting by several news organizations cast over the Egyptian mass protests.

I don't know whether I'll be blogging again on Egypt anytime soon; the region is not my regular 'beat.' The takeaway for me, after weeks of focusing my attention on the country, is that the Egyptian military's old guard got their wish -- they got rid of Gamal Mubarak and the Gamalists. But the old guard can't guide Egypt in this complex era; they don't know how. The Gamalists do know how. The vast majority of Egyptians who turned out for the protests aren't aware of this, and don't know they were used to defend Egypt's ancien regime from the reformers who realized it had to be dismantled -- slowly, but dismantled nonetheless.

My heart wants to believe that despite everything the protests heralded a new and better day for Egypt. My head tells me the new day is a false dawn.

As to whether I can see a midpoint between those extremes -- oh yeah: half a million Chinese entrepreneurs descending on Cairo and asking, 'So. You sit up all night chattering in coffee houses. What time you get up and go to work?'

That might do the trick but I don't know if God likes the Egyptians quite that much. I fear that in the wake of the protests what they'll get instead of irritating Chinese is half a million humanitarian aid workers and human rights activists from the West clucking over them and asking, 'Where does it hurt?'
Posted by Pundita at 2/16/2011 01:59:00 AM