Update
See my followup post, Just when we'd learned to spell to 'Bárdarbunga', which discusses the complaint of the scientist (mentioned in this post) that his comments weren't translated properly.
*********
February 9, (U.K.) Daily Mail

Scientists in Iceland are warning that another volcano on the island looks set to erupt, threatening to spew-out a blanket of dust that would dwarf last year's eruption.

Geologists detected the high risk of a new eruption after noticing an increased swarm of earthquakes around the island's second largest volcano Bárdarbunga.

Pall Einarsson, a professor of geophysics at the University of Iceland, says the area around Bárdarbunga is showing signs of increased activity, which provides 'good reason to worry'.
[...]
The last recorded eruption of Bárdarbunga was in 1910, although vulcanologists believe its last major eruption occurred in 1477 when it produced a huge plume of ash and pumice and the largest known lava flow during the past 10,000 years on Earth. It is the second largest volcano on Iceland and is directly above the mantle of molten rock.
[...]

As to the chances of the thing blowing, well, they don't have enough equipment in that area to get a clear picture:

Mr Einarsson told the country's national TV station 'RC:v' that a low number of seismometer measuring devices in the area is making it more difficult to determine the scale and likely outcome of the current shifts.

But he said there was 'every reason to worry' as the sustained earthquake tremors to the north-east of the remote volcano range are the strongest recorded in recent times and there was 'no doubt' the lava was rising.

The geologist complained that the lack of coverage from measuring devices means he cannot accurately detect the depth and exact location of the increased number of localised earth movements.

'This is the most active areas of the country if we look at the whole country together,' he told Icelandic TV News.

'There is no doubt that lava there is slowly growing, and the seismicity of the last few days is a sign of it.
[...] 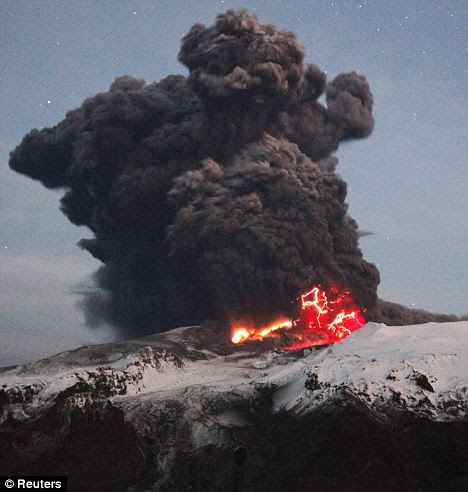