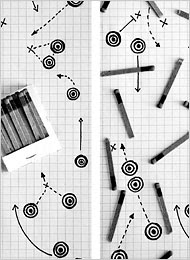 When I'd first posted about the attack on the InterContinental Hotel, which was while it was still in progress, I'd written that it seemed to be a 'swarm' attack, of the kind launched against Mumbai in 2008. When I read B. Raman's analysis today on the attack I realized I'd been wrong to view it as a swarm tactic because even though it had touched off chaos in Kabul it was lodged against only one site. This realization decided me to review John Arquilla's description of the swarm, which he gave in a February 2009 op-ed for the New York Times (The Coming Swarm):

With three Afghan government ministries in Kabul hit by simultaneous suicide attacks this week, by a total of just eight terrorists, it seems that a new “Mumbai model” of swarming, smaller-scale terrorist violence is emerging.

The basic concept is that hitting several targets at once, even with just a few fighters at each site, can cause fits for elite counterterrorist forces that are often manpower-heavy, far away and organized to deal with only one crisis at a time. This approach certainly worked in Mumbai, India, last November, where five two-man teams of Lashkar-e-Taiba operatives held the city hostage for two days, killing 179 people. The Indian security forces, many of which had to be flown in from New Delhi, simply had little ability to strike back at more than one site at a time.

While it’s true that the assaults in Kabul seem to be echoes of Mumbai, the fact is that Al Qaeda and its affiliates have been using these sorts of swarm tactics for several years. Jemaah Islamiyah — the group responsible for the Bali nightclub attack that killed 202 people in 2002 — mounted simultaneous attacks on 16 Christian churches in Indonesia on Christmas Eve in 2000, befuddling security forces.

Even 9/11 itself had swarm-like characteristics, as four small teams of Qaeda operatives simultaneously seized commercial aircraft and turned them into missiles, flummoxing all our defensive responses. In the years since, Al Qaeda has coordinated swarm attacks in Saudi Arabia, Tunisia, Turkey, Yemen and elsewhere. And at the height of the insurgency in Iraq, terrorists repeatedly used swarms on targets as small as truck convoys and as large as whole cities.[...]

Raman's analysis underscores Arquilla's definition of the term and shows the limits of likening the attack on the InterContinental to the ones in Mumbai:

[...]6. The attack resembled the 26/11 terrorist strikes in Mumbai, which involved, inter alia, attacks on two hotels, in two respects and differed in two other respects. The resemblances were regarding the selection of a hotel frequented by foreigners as a target and the use of a mix of modus operandi involving the use of explosive devices and hand-held weapons.

7. The important differences were that it was not a swarm tactics involving well orchestrated attacks on multiple targets located at different places by multiple teams of terrorists thereby forcing the security forces to scatter their resources. It was a single target attack by a single team of terrorists. Moreover, whereas in Mumbai there was a conscious attempt to take hostages in order to prolong the exchange of fire with the security forces, there was no such attempt in the Kabul attack.[...]

Raman's description of the circumstances of the death of a Spanish civilian in the hotel leaves unresolved at this point whether there had been hostage-taking:

10. [...] One of the attackers took shelter in a room. After an exchange of fire with the security forces, he blew himself up. As he did so, two policemen and a Spanish guest of the hotel, a commercial pilot, were killed.[...]

If the guest was in the room where the terrorist had taken refuge, that might represent hostage-taking.

I'll note here one other observation from Raman's analysis:

A part of the hotel was undergoing renovation involving employment of labour. Police suspect that the terrorists might have taken advantage of this to circumvent access control and gain access to the hotel.

That could suggest the attack was more a crime of opportunity than one designed with a specific date, event or hotel clientele in mind.

As to the most effective counter-swarm tactics, Arquilla, who teaches at the U.S. Naval Postgraduate School and is a proponent of replacing (or at least supplementing) the hierarchical U.S. military structure with a 'networked' one, advised in the same writing for the NYT:

[...] So how are swarms to be countered? The simplest way is to create many more units able to respond to simultaneous, small-scale attacks and spread them around the country. This means jettisoning the idea of overwhelming force in favor of small units that are not “elite” but rather “good enough” to tangle with terrorist teams. In dealing with swarms, economizing on force is essential.

We’ve actually had a good test case in Iraq over the past two years. Instead of responding to insurgent attacks by sending out large numbers of troops from distant operating bases, the military strategy is now based on hundreds of smaller outposts in which 40 or 50 American troops are permanently stationed and prepared to act swiftly against attackers. Indeed, their very presence in Iraqi communities is a big deterrent. It’s small surprise that overall violence across Iraq has dropped by about 80 percent in that period.

For the defense of American cities against terrorist swarms, the key would be to use local police officers as the first line of defense instead of relying on the military. The first step would be to create lots of small counterterrorism posts throughout urban areas instead of keeping police officers in large, centralized precinct houses. This is consistent with existing notions of community-based policing, and could even include an element of outreach to residents similar to that undertaken in the Sunni areas of Iraq — even if it were to mean taking the paradoxical turn of negotiating with gangs about security.

At the federal level, we should stop thinking in terms of moving thousands of troops across the country and instead distribute small response units far more widely. Cities, states and Washington should work out clear rules in advance for using military forces in a counterterrorist role, to avoid any bickering or delay during a crisis. Reserve and National Guard units should train and field many more units able to take on small teams of terrorist gunmen and bombers. Think of them as latter-day Minutemen.

Saudi Arabia, Tunisia, Turkey and Yemen all responded to Qaeda attacks with similar “packetizing” initiatives involving the police and armed forces; and while that hasn’t eliminated swarm attacks, the terrorists have been far less effective and many lives have been saved.

As for Afghanistan, where the swarm has just arrived, there is still time to realize the merits of forming lots of small units and sprinkling them about in a countrywide network of outposts. As President Obama looks to send more troops to that war, let’s make sure the Pentagon does it the right way.

Yes, the swarm will be heading our way, too. We need to get smaller, closer and quicker. The sooner the better.