One species at the National Zoo raised an alarm 15 minutes before the earthquake struck Washington, DC 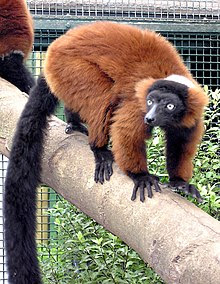 From DC Day After the Quake, NBC Washington:

The first warnings of the earthquake may have occurred at the National Zoo, where officials said some animals seemed to feel it coming before people did. The red ruffed lemurs began “alarm calling” a full 15 minutes before the quake hit, zoo spokeswoman Pamela Baker-Masson said. In the Great Ape House, Iris, an orangutan, let out a guttural holler 10 seconds before keepers felt the quake. The flamingos huddled together in the water seconds before people felt the rumbling. The rheas got excited. And the hooded mergansers — a kind of duck — dashed for the safety of the water.

There's a large body of lore about unusual animal behavior prior to an earthquake but nothing definitive as far as science is concerned. And while many pet owners have noticed unusual behavior in their dogs, cats, or birds just prior to an earthquake, the anecdotes I've read suggest that much of the behavior occured just a few seconds before the quake struck.

And it's possible that much of the behavior, as seems the case with that of the flamingos and ducks at the National Zoo, was actually after the fact: the quake had already occurred at the epicenter, 80 miles from Washington, but the fowl were reacting to subtle vibrations as the shock waves traveled outward.

To be sure, a few seconds warning would be better than nothing -- it would be enough time for a pet owner to run out of the house or take cover in the bathtub, but not enough time to act as any kind of public warning.

Fifteen minutes warning, on the other hand, would be an eternity in relation to an earthquake warning because humans have no public warning system of any kind. When one considers that even a three-minute warning ahead of a 6.5 or higher earthquake could save thousands of lives and prevent many serious injuries, the notations of the zookeepers at the Washington National Zoo about the lemurs' behavior will probably come in for serious study by scientists who study earthquakes and tsunamis.

Assuming for the sake of discussion that the lemurs at the National Zoo were indeed reacting to a subtle precursor of the 5.8 earthquake that was felt across one-third of the United States and in parts of Canada yesterday, the first question would be whether they would have been as sensitive to an impending earthquake of the same magnitude in the western part of the USA.

Different soil density and types of tectonic plates mean the difference between tremors carrying from a quake epicenter over a huge area, as happened in the eastern part of the USA and Canada yesterday, or carrying over a very limited area, as they do in California and other western regions of the USA.

Another big factor is the depth of a quake. The fault that opened yesterday in Mineral, Virginia, the epicenter of the quake, was only three miles underground. Would the lemurs at the National Zoo have noticed anything if the depth of the fault had been twice or three times that?

No way to answer the question now, because even if the lemurs were reacting to something associated with the quake, it's not known what the something is. So scientists have their work cut out for them.

In the meantime, however, those who live in an earthquake alleyway might want to ring up their neighborhood zoo and ask if there are any red-ruffed lemurs in residence. If not, well, lemurs seem to be pretty low-maintenance and if they turn out to be duds at earthquake prediction they're still a nice addition to a zoo. 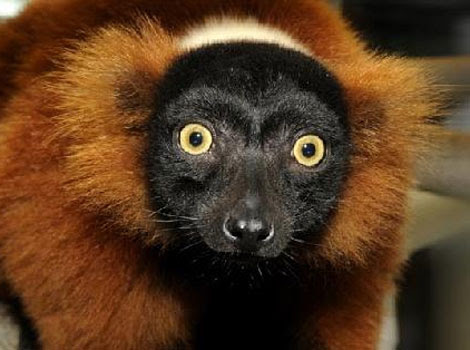