"The government launched a peace drive and sent hundreds of extra security forces into the troubled neighbourhoods, and calm has held for a week. The military said recent government measures were expected to “help redress the situation." -- The Nation 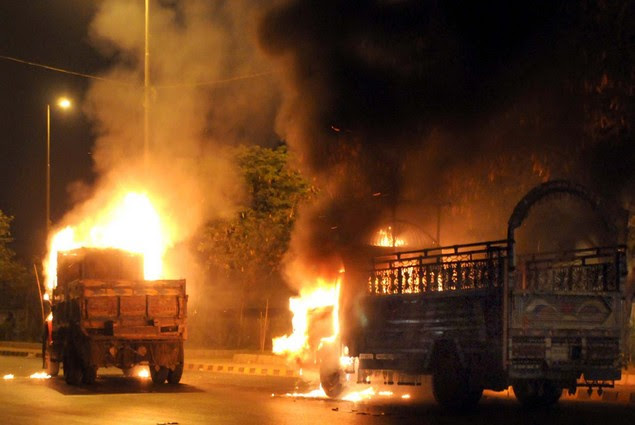 ISLAMABAD: While the army command on Monday appeared worried about the continuing wave of violence in the country’s commercial and financial hub that has so far claimed over 800 lives, it decided to stay out of the Karachi imbroglio and instead backed the government’s efforts for bringing back peace.

The Corps Commanders Conference, which is the military’s principal decision making forum, was presided over by Army chief Gen Ashfaq Parvez Kayani.

“The forum expressed concern over the law and order situation in Karachi and its ramifications/implications for the national economy and expected that the measures recently undertaken by the government would help redress the situation,” a press statement by the army’s public affairs wing, ISPR, said.

It was for the first time during the current cycle of violence that the military publicly expressed its concerns over the law and order situation and at the same time turned down calls by political parties involved in the conflict for its intervention.

The rare army statement on the situation in Karachi came after about 350 people were killed in July and the Karachi Stock Exchange, which is billed as the barometer of the country’s financial health, dipped to a four-month low last week, losing 6.7 per cent of its value.

The KSE loss was much sharper than the downturn in most of the other Asian markets following a cut in US rating by Standard and Poor’s. Besides, the panic offloading of shares in the KSE because of political, ethnic and sectarian strife had started even before the other Asian markets’ knee-jerk reaction to the developments in the US.

Both MQM and ANP, who blame each other for the violence, have asked for army deployment in the city for restoring peace.

The military fears that if the turmoil continues it could throw the country’s already troubled economy into a deeper crisis.

A source familiar with the proceedings of the conference said the army command believed that the Karachi issue “is essentially a political problem” and that it was the government’s responsibility to develop a consensus on possible ways for ending the wave of violence that had gripped the city.

The government has deployed additional police and paramilitary forces in the city and President Asif Ali Zardari last week held talks with the MQM, inviting them to rejoin the government.

Later, the government in a major concession to the MQM agreed to abolish the commissioner system it had restored in the first week of last month to address the law and order situation in the city and revive district governments.

The government is also pushing for ‘de-weaponisation’ of the city.

The military, the source said, wanted to give the government’s initiative a chance.

Although the army would not be actively launching an operation against the groups involved in violence, it is said that intelligence outfits under its control would enhance support for the civilian law-enforcement agencies’ operations against them.

“We’ll make all resources available to the civilian LEAs,” army spokesman Maj-Gen Ather Abbas said, adding that economic security of the country was an important pillar of national security and no effort would be spared to preserve it.

To return to the Nation report:

The independent Human Rights Commission of Pakistan (HRCP) says 800 people, most of them poor, have died since January, including 300 last month alone. The HCRP says the violence in Karachi is the deadliest since 1995, when more than 900 killings were reported in the first half of the year.

The HRCP previously said 490 people were killed in the first six months of the year and on Friday that another 300 people died in July. Much of the violence has been blamed on tensions between supporters of the Muttahida Qaumi Movement (MQM) and the Awami National Party (ANP).

The government launched a peace drive and sent hundreds of extra security forces into the troubled neighbourhoods, and calm has held for a week. The military said recent government measures were expected to “help redress the situation”.

The violence has also affected economic activities in Karachi, the country’’s largest city. Several political parties, including the MQM and ANP, have urged the army to conduct operations in Karachi to end the violence.

Accusations and counter-accusations have continued between the leaders of the MQM and those of the ANP in particular and MQM and Pakistan Peoples Party (PPP) in general. In the recent past, some MQM leaders held the rulers of the PPP in Sindh and at centre responsible for fuelling riots in Karachi. But on August 3, Prime Minister Syed Yousuf Raza Gilani dispelled the impression that government wanted to create differences among various segments.