But what about Delhi's non-industrial users of Tehri Dam's water? UPDATED 2X 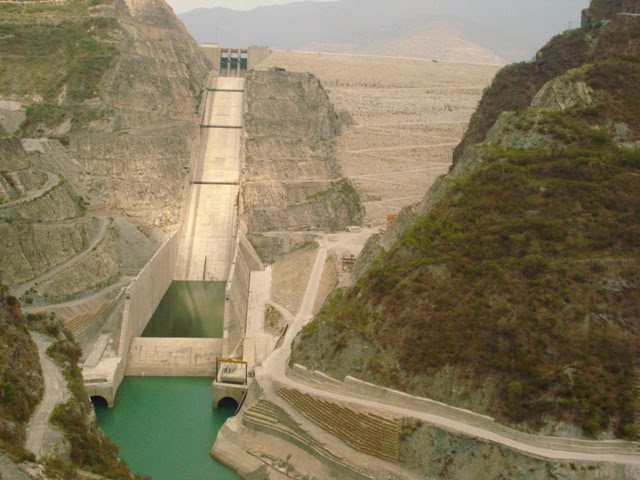 "The Tehri Dam and the Tehri Pumped Storage Hydroelectric Power Plant are part of the Tehri Hydropower Complex which also includes the 400 MW Koteshwar Dam.[1] Power is distributed to Uttar Pradesh, Uttarakhand, Punjab, Delhi, Haryana, Jammu and Kashmir, Chandigarh, Rajasthan and Himachal Pradesh. The complex will afford irrigation to an area of 270,000 hectares (670,000 acres), irrigation stabilization to an area of 600,000 hectares (1,500,000 acres), and a supply of 270 million imperial gallons (1.2×106 m3) of drinking water per day to the industrialized areas of Delhi, Uttar Pradesh and Uttarakhand."  (Wikipedia)

This post isn't to pick on the Tehri Dam, one of the tallest and most controversial dams in the world -- although it's probably a little less controversial since its starring role in 2013 in preventing the destruction of Rishikesh and Haridwar.
****
UPDATE: This wouldn't preclude the possibility that the Tehri Dam or diversion of rivers for other other dams elsewhere in India somehow caused the unprecedented flooding that almost wiped out those two very significant hill towns. But as the public record stands now the Tehri Dam was the saving grace.
****
The dam is truly a man-made wonder, as it's been called.  But dams weren't conceived to deal with the ways of humans, who quite naturally will take advantage of improvements in water supply and electricity that dams provide.  This leads to consequences that today are all too painfully evident.

The following report, published on the Future World Project website, doesn't have a byline and is undated but so little information is published in the mainstream press (at least in English) about the situation it addresses I'm not going to complain. My guess is that it was written no earlier than 2011.  In any case the issues it addresses are ongoing -- and by no means limited in India to the city of Delhi.  They're not limited to India, either.

All over the world -- even here in Washington, DC -- the same basic pattern has been in effect for many years; in fact, it's one of the characteristics of the modern era.  Large numbers of people seeking employment and a better life to converge on a city that wasn't constructed to deal with the influx, and which to one degree or another doesn't have the water resources to keep supporting continuing spikes in the population.

Thus evolves a complex political game that's sort of a cross between Musical Chairs and Robbing Peter to Pay Paul.  This game launches all kinds of very expensive schemes for bringing more water to the city.  But as the water situation improves from the construction of a new dam or the diversion of a river, etc., even more people -- and industry -- converge on the city, putting great stress on the new water delivery system, and so it goes.

Meanwhile, the water table in the region keeps falling.

Of course the key difference between, say, Washington, DC and Delhi is that the climate on the mid-Atlantic seaboard can, for the foreseeable future, keep the game going in the District, whereas Delhi is always just a few droughts away from disaster.

A reasonable person might ask why governments in the most water stressed regions of the world don't try to limit the massive migrations.  It's the question of the hour, the year, and indeed it will shape much of our era going forward.  The biggest development banks, international aid organizations, and various United Nations agencies already get it; they realize the game can't continue.

As you saw from the Inter Press Service report I published on Brazil's water crisis, the Brazilian government has at least one initiative to encourage residents of the nation's largest city to return to their home regions. However comma this is a way of life, and a way of governing, under discussion.

The megacities have taken on vast power that is not so easy to challenge, let alone dismantle. And while it sounds good on paper to return people to their home regions in say, India, many Indians can't go home because they were bought or tricked out of their land or forcibly displaced by industries and government officials that the industries work with.  The same for peoples in many countries.

So, Arvind Kejriwal's "Swaraj," which is about restoring real governing power at the village level in India, is beginning to look not only practical but also necessary.  And Thailand King Bhumibol Adulyadej's New Theory, the forerunner of his "Philosophy of Sufficiency Economy," which 40 years ago seemed completely out of tune with the modern era, could well become part of the vanguard of best practices for protecting the poorest in the world's rural areas from the worst economic dislocations of modernity.

The basic ideas of both King Bhumibol and Arvind Kejriwal can be adapted for urban environments but there must initiatives to encourage rural peoples to stay in place and again,  this is already understood at the largest economic development institutions.  Change is in the air -- or at least the realization is in the air that major adjustments must happen, but it's not here yet in any appreciable measure.  Here is what is here now:

"I am very tired of telling poor people to save water, when it is mainly the rich that should."

Outside one of the most luxurious residences in Delhi's embassy district, an elderly man waters the dusty driveway. A short rickshaw journey and people are fighting to get enough drinking water. It is 45 degrees Celsius.

Every day, water has to be delivered to the people living in the outer parts of Delhi. Millions living in these slums don't have access to water and sanitation services as the groundwater table is depleted.

"These areas have been populated 20-25 years. There has never been enough water here, but the water shortage is a growing problem," says Kamal Gupta who works for the local organisation FORCE, supported by Water Aid.

Every year around 350,000 people arrive in Delhi from other parts of India in hope for a better future, some forced from there land as crops fail.

Fast pace population growth, combined with a warmer climate and severe drought has led to widespread water shortages in India’s capital. "They blame it on us, we are already starving," says Rajesh Kumar, who came to Delhi from the impoverished neighbouring state Uttar Pradesh 20 years ago. If they counted water per head it would be fairer."

"We are totally dependent on the water trucks. For the last five years the well has been empty. Previously there was water for two months of the year from rainfall at least," he says.

Outside one of the tattered houses we meet another resident. Sonia Devi. She lives here with her husband and four children in a ten square metre room with no toilet.

"The biggest problem is sanitation and hygiene; there is not enough water to keep ourselves clean. We have to walk kilometres just to go to the bathroom sometimes. It is like being mentally harassed," she says.

30 percent of Delhi's population lives in slums. Technically many of these settlements are illegal, therefore there is no investment into facilities. Self appointed Cluster leaders take advantage of their illegal status by dominating the water supply and making profit from other peoples plight. We leave Sonia Devi and Rajesh Kumar and take a rickshaw to Israel Camp, another rural cluster in south Delhi.

Here the cluster ‘big boss’ man known as Pradhan has made water shortage a source of income for himself. "We are forced to pay 150 rupees (about 2,6 euros) to fill water for 20 minutes. People are afraid to speak up as the land is owned by the Forest department who are friends with Pradhan," adds a woman unwilling to say her surname for fear of repercussions.

The organisation FORCE works with water related issues in Delhi and has problems helping the people in Israel Camp due to this absurd situation. "We recently put up 40 restrooms just outside the area to improve the sanitation situation, but there are many cases like Pradhan" says Krishna Kumar Tiwari who works for FORCE.

We head north to the slums on the other side of the city. A gruelling hour-long rickshaw journey in 45 degrees Celsius keeps water on the mind. "See these children's faces," says Jasvinder Kaur as she grabs a small child. The girl's face is full of black reddening bumps that look like her face is bubbling with a severe black acne. "They have been playing with the contaminated water from the taps in the street."

Jasvinder Kaur works for FORCE in Delhi and travels to different slum areas each day. We meet her in Shiva Nand cluster where every person is allowed 20 litres of water per day. "It is not enough, so many pump up severely polluted water from the river.”

Since FORCE placed water silos in the area the chaos around water supplies has calmed a little.

"Earlier there was often panic because they were afraid they wouldn't get enough," says Jasvinder. Shiva Nand is one of the better examples of dealing with a worsening situation in Delhi.

Recently FORCE and the local community installed a water collection system in the grounds of a nearby school.

"Wealthier people waste water. They have swimming pools, air coolers and flush their toilets. Water is essential to all human survival. I am very tired of telling poor people to save water, when it is mainly the rich that should," says Jasvinder Kaur.