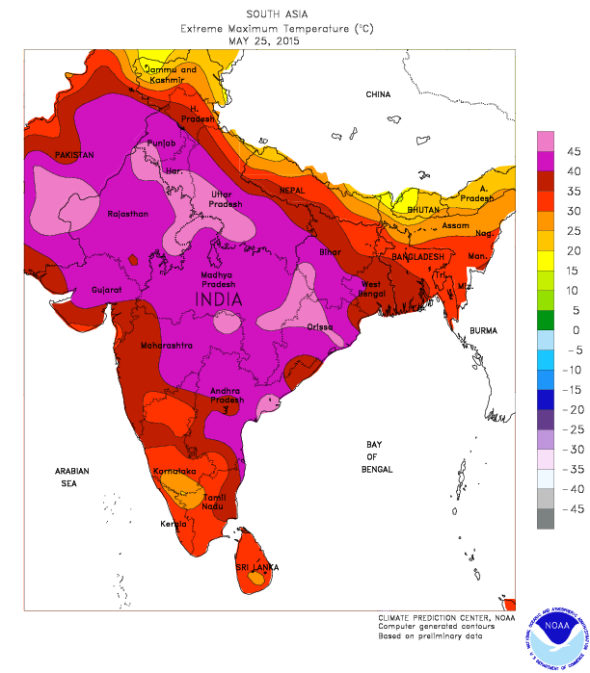 From meteorologist Eric Holthaus's analysis today for Slate (India's Deadly Heat Wave). Much of the writing is a stump against global warming, climate change, greenhouse gas emissions, etc., and a discussion of India's electricity as it pertains to electricity. But I found these passages interesting:


Next to parts of the Amazon River basin, coastal India typically experiences the highest heat indexes of anywhere on the planet.
[...]
Conditions like this—horrible heat, and the vast majority of people without access to air conditioning—will continue until the monsoon season arrives in early June. The Indian monsoon is, in my opinion, the most important weather forecast in the world, and the outlook for this year’s rains isn’t great.

With so many farmers dependent on the rains­—which produce 70 percent of the year’s total rainfall in just four months—the monsoon is sometimes called “India’s real finance minister.”

Though the rains are expected to arrive on time this year, the seasonal total could disappoint for reasons similar to last year’s failure: A growing El Niño and an unfavorable distribution of heat in the Indian Ocean could stifle thunderstorms. Should the monsoon’s northward progression stall out like last year’s, India could have several more weeks of scorching heat to come.

As to Holthaus's diatribe about India's poor dying in the current heat wave, which so far as claimed more 1,100 lives -- has he forgotten that more than 52,000 people died in Europe's heat wave in 2003?

It was some time after the event before the true number of deaths was properly tallied and published. And an abstract for one study that can be purchased online for 36 bucks suggests the death toll was much higher -- 70,000 -- although I don't know whether the authors were able to demonstrate that the 'additional' deaths were specifically heat-related.

In any case, in that year the continent experienced its highest temperatures in 500 years.  Three years later another killer heat wave struck much of the European continent; temperatures recorded in June 2006 were the highest on record.  The known number of deaths couldn't have been anywhere near even the most conservative 2003 total but I wish you luck if you want to learn from Bing or Google searches or Wikipedia's article on the heat wave what an estimate of the 2006 death total was.
There were very ugly accusations related to the large number of heat-related deaths in 2003, in particular the ones in France -- although whether any or all panned out, I never researched the question because I think it would be virtually impossible to answer.

Anyhow, maybe because of the accusations, some of which if I recall centered around deliberate neglect of the elderly in areas that didn't have much air-conditioning, Europeans just wanted to move on in the wake of the 2006 heat wave, and not focus overmuch on statistics. Maybe -- maybe -- that explains it.

I'll add that a heat wave followed in North America (July - August 2006), killing at least 225 people in the USA and Canada -- although as Wikipedia's article notes, many heat-related deaths go unreported.

My point to Eric Holthaus is that all the screaming and yelling about carbon footprints is not going to save lives in India's heat wave this year.  It's the same with India's water shortage problems.

There are simple actions that can be taken by Indians to help each other through these crises. If they don't want to take them, if they're waiting for the government to fix it all -- most I can say is that Death doesn't recognize bureaucracy.

See also The Science Behind an Indian Heat Wave; Wall Street Journal; May 27, 2015:

The severe heat wave gripping parts of India started gathering force when cyclonic patterns of clouds and winds over the Bay of Bengal drifted away, bringing an abrupt end to pre-monsoon showers.

Although high temperatures are commonplace during the summer season in India between April and June, sporadic rains -- often the result of cyclonic, or low-pressure, systems -- provide temporary relief. But the heat-beating clouds over the Bay of Bengal recently drifted northwest leaving behind an Indian heat wave.
[...]