That's over 35 trillion gallons of water.  One observer noted he'd never seen Texas this green.  So there go the Hurricane Ike comparisons out the window. The rain in Texas is unprecedented.  Part of the reason for the heavy rains is that the storm systems have been very slow-moving, but the biggest story right now is that there may be no end in sight this summer, and that the above-average precipitation is predicted to be across a broad swath of the USA. In one way that's great; it could take several states out of the drought or dry category, but of course flooding carries its own big problems.

Graphic from the Houston Chronicle; the green indicates above-average rainfall; forecasters are saying it could go into the fall or even winter, according to the Chronicle. 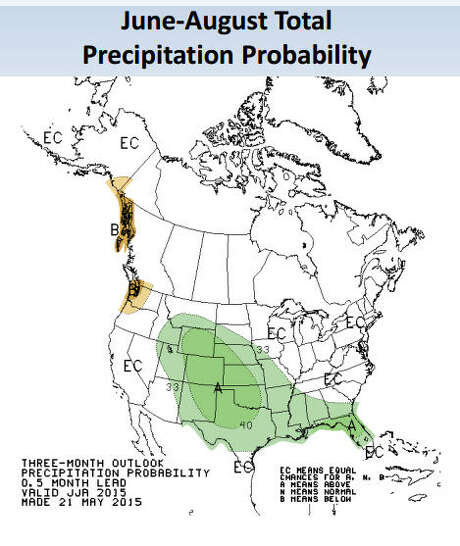 Texas Dept. of Transportation spokespersons held a press conference that concluded at 3:45 PM to update state residents on the flooding situation, which has generated so many reports that even AP is having trouble keeping up.  They've taken to simply 'live-blogging' reports on the storms and flooding as they gather them. This is a TV story, not one for print media including the blogosphere. The Weather Channel's ratings must be in the stratosphere.

But the latest from AP (4:30 PM CDT) is that Arkansas is trouble:

Hutchinson toured flooded parts of the state on Friday. On his return to Little Rock, he applauded first-responders.

Arkansas highway officials have closed a pair of roads in southwestern Arkansas because of flooding, and the Pig Trail Scenic Byway is closed north of Cass because part of the roadway has washed away.

Much of the state is on alert for high water, and the Storm Prediction Center posted a tornado watch for western Arkansas and adjoining parts of Oklahoma and Missouri until 7 p.m.

Even the snakes may be seeking higher ground, according to one advisory.  Meanwhile over in Texas:


The mayor of a city about 60 miles southwest of Houston has ordered the evacuation of about 300 flood-threatened homes near the Colorado River.

Paula Favors, a spokeswoman for the city of Wharton, says the mayor ordered those homes evacuated by 5:30 p.m. Friday. She says many residents had already left when the evacuation was voluntary.

The river is expected to crest in the area at just over 43 feet on Saturday morning. Favors says that would likely flood several residential streets in low-lying areas of Wharton, a city of about 8,500 residents.
[...]

And for those who can't get enough Texas flood stories, there's Rain is a Good Thing But Here Come the Insects from NBC News today, which includes a video of flooding in Houston.

All right, that does it for me.  Barring Biblical flooding, from now on I'm going to leave updates to TV reporters and energetic staff writers at AP.  That is, until I see a report that tots up the dollar damage from the flooding.