Nusra: "A story of rats trying to pass for fluffy white rabbits." But who are the biggest rats? 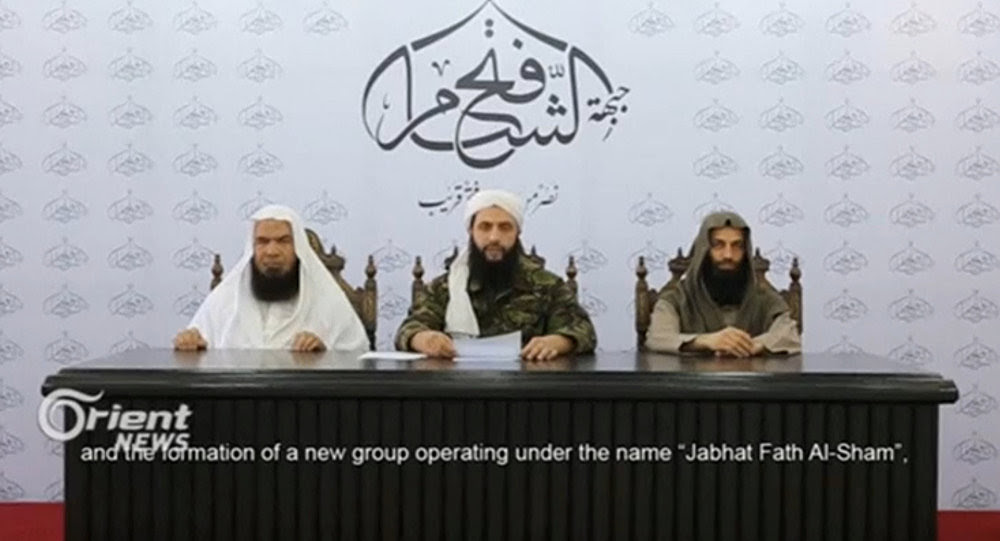 As I was trying to think up the most sarcastic headline I could about Nusra Front's name change, today Sputnik saved me the brain sweat:

The report is a largely a summary of official reactions from Russia and the USA to Nusra's attempt to pass themselves off as moderates by distancing themselves from al Qaeda, which has fooled no one.

However, Sputnik makes a few points that have not been reported in the Western news media.  Before I highlight these I want correct Sputnik on a mistake that has been made by every press outlet I've read that has reported on the story. To my knowledge only Long War Journal picked up on the mistake, which is that Nusra didn't exactly say they'd broken with al Qaeda.

From Thomas Joscelyn's July 28 analysis for LWJ of Nusra's announcement:

Abu Muhammad al Julani, the emir of Al Nusrah Front, delivered a short statement today concerning his organization’s future. He read his message in a video that was rebroadcasted by television stations throughout the Middle East, publicly showing his face for first time. In previous appearances on Al Jazeera and other stations, Julani’s image was obscured.

Julani’s group will no longer be known as Jabhat al Nusrah (or Al Nusrah Front), but instead as Jabhat Fath Al Sham (“Conquest of the Levant Front”). The move is being spun in press reports around the globe as Al Nusrah’s official “break” or “split” from al Qaeda.

Julani did not explicitly say that Al Nusrah had broken or split from al Qaeda, which is the language used by the press. He made no such claims.

Instead, Julani said Jabhat Fath Al Sham would have “no affiliation to any external [or foreign] entity.” If Julani wanted to argue that he and his men no longer had any ties to al Qaeda, he could have said so. He didn’t. And his precise wording allows for a considerable amount of wiggle room.

Surely by now the LWFJ analysis has been read by everyone who's actually studying the war in Syria, to include intelligence and defense advisers to governments. But this doesn't mean the major news outlets in the West will set the public straight about the gaffe. Why not? Why not take a moment to issue a correction? Getting a handle on the answer returns me to Sputnik's report (emphasis throughout mine):


[...] Middle East expert Semyon Bagasarov pointed out that Nusra Front leader Abu Mohammad al-Julani has been actively working to present himself and his group as a moderate, with the Persian Gulf nation of Qatar effectively supporting this line.

According to Bagdasarov, the Nusra Front may not have managed to capture as much territory as Daesh, but the territory they do have under their control is more strategically significant than much of the vast empty space controlled by Daesh in Syria's eastern regions. Specifically, the Syrian province of Idlib, bordering Turkey, was intended to be the site of the Nusra Front's own caliphate. And according to the expert, they're not going to give up on that effort.

"In this situation, it's very important for the group that the UN does not consider it a terrorist group, and one associated with al-Qaeda at that," Bagdasarov added.

For its part, al-Qaeda appeared to have realized that not all was going well for their Syrian franchise. On the eve of the break, al-Qaeda leader Ayman al-Zawahiri issued a statement where the Nusra Front was given the right to act with more autonomy. If fact, according to Bagdasarov, the two groups may have even agreed to the formal split.

According to the expert, the attempt at rebranding "seems at first glance to have been a simple, even primitive calculation that having split with al-Qaeda and changed its name, the terror group would fall out of the list of terrorist organizations. After that, the logic went, it could even be counted among the 'moderate' Syrian opposition, and included in the Geneva peace talks."

Unfortunately, according to Yuri Bialy, vice president of the Moscow-based Experimental Creative Center Foundation, Nusra may have some success on this front. The terror group, he noted, is counting on receiving support not just from some Arab countries (Saudi Arabia in particular) but even from some Western powers, including France and the UK.

In other words, without Russia's military intervention absolutely nothing in Syria would have a chance to change because the United States of America and its European and Gulf allies have wanted to destroy Syria and raise in its place a Middle Eastern version of the Balkan countries -- where Western and Gulf powers will share in control of regions administered by proxy Islamist rulers.

Baily and other experts Sputnik quotes go on to make good points:


For his part, Dmitri Abzalov, the director of the Center for Strategic Communications, pointed out that even direct violent clashes between the Nusra Front and Daesh have not prevented the two groups from cooperating in the economic sphere.

"For a long time, the Nusra Front controlled a large portion of the Syrian-Turkish border, through which the oil caravans produced on Daesh-occupied territory made their way to Turkey. Throughout this period, Nusra acted as a kind of commodities broker for Daesh, helping it to sell its black gold on commodities exchanges."

The report concludes on a hopeful note:


Ultimately, Abzalov suggested that broadly speaking, the Nusra Front, or 'Jabhat Fatah al-Sham', as it now prefers to call itself, has found itself in a much more difficult situation than Daesh [Islamic State]. If the militants of that [latter] group can freely escape Syria and head east for Iraq, Nusra is in a situation where they are being pressed against the Turkish border in their main base of support, the region of Idlib.

"Taking into consideration the new relations between Turkey and Russia, the Islamists will no longer be able to count on Ankara's assistance. The last thing they will be able to hope for is a measure of leniency toward themselves, hence the attempt to soften their radical positions. Therefore, the renaming, and the renunciation of ties with al-Qaeda really suggests that the group is in its death throes."

Accordingly, Abzalov noted, the terrorists' rebranding effort indicates that the situation in Syria is beginning to improve in a fundamental way.

Again, as Long War Journal explains, there has been no renunciation of ties:


Moreover, even if Julani did say that his group had really split from al Qaeda (which he didn’t), there is no good reason to believe him. Julani himself noted that Al Nusrah’s rebranding was necessary to obscure the vision of its enemies, especially the US and Russia. In addition, al Qaeda’s leaders have long sought to mask the extent of their influence in order to minimize Western scrutiny.

Long War Journal has pounded away at that last point to anyone who would listen, including Members of the  U.S. Congress. But LWJ has been going through what top counterterrorism expert Youssef Bodansky went through for years, until he finally gave up and holed up at Gregory Copley's Defense & Foreign Affairs.

No matter how many times Seffy explained, no matter how much data he dredged up, Members of Congress and the U.S. National Security Council would read his reports then say, 'Uh uh, uh huh,' then continue on with no change -- even after 9/11. Even after 9/11, do you understand me?

So I'm not as hopeful as Abzalov. Barack Obama, for all his horrific mistakes in defense policy, has been playing the role of the Maginot Line to prevent the utter destruction of Syria by U.S-NATO factions and the Gulf powers. The virtually impregnable line of fortifications, as history tells us, was eventually outflanked by the Nazi army.