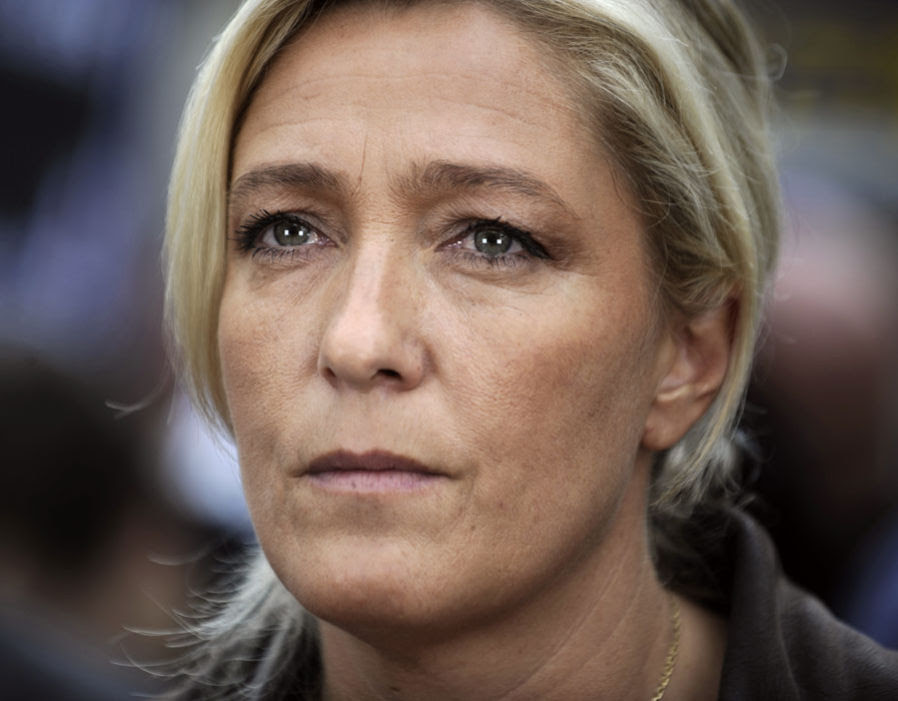 Former prime minister Alain Juppe revealed he would not stand in the race to replace scandal-hit Francois Fillon.

The news prompted the currency to shed more than 0.3 per cent to hit 1.05 against the dollar to 1.05, while the pound also clawed back previous losses against the euro to 1.15.

A poll on Friday had showed that if Mr Juppe had become the new centre-right candidate, he would likely win the election's first round in April, with Emmanuel Macron coming second - knocking anti-Brussels Ms Le Pen out of the race.

Markets have been on edge ahead of the French elections amid the rising popularity of Front National leader Ms Le Pen.

The far-right candidate has promised to put a Frexit vote to the public should she win the election.

If France votes out of the euro, markets fear it could spell the end of the project.

After last year's surprise Brexit vote and Donald Trump win, investors are anticipating the French could deal the establishment another blow.

2. Why Marine Le Pen will not be the next French president
By Gilles Ivaldi, researcher in politics, CNRS-University of Nice
3 March 2017
Euro News

While clearly the frontrunner of the next presidential, there remain significant hurdles for Marine Le Pen to overcome before she can get into power.

First, unlike Donald Trump in the US and despite Le Pen’s attempt to soften her party’s image, the FN continues to be associated with the old extreme right in the eyes of many voters. The latter would certainly turnout in mass to form a barrage against Le Pen in the runoff.

Second, the FN has little economic credibility. Its EU-exit policies in particular are rejected by a majority of the French, raising also strong scepticism among economic leaders, trade unions and the business community.

Lastly, the FN remains contained behind the cordon sanitaire erected by other parties in the early 1990s. It lacks the coalition potential that is vital to any successful bid in France’s two-ballot majoritarian system.

Radical right National Front (FN) leader Marine Le Pen is set to top the first round of the next presidential election in France. Current polls suggest that she could win over a quarter of the vote, making it through to the presidential run-off.

Like the rest of Europe, the radical right surge in France is fueled by cultural and economic fears over immigration, globalisation and Islam.

Since 2012, the FN has been thriving on the economic crisis, effectively channeling voter anger over President Hollande’s failure to deliver on his promise to curb unemployment. Amidst a refugee crisis and growing discontent with the EU, Islamic terror attacks have exacerbated anti-Islam sentiments and the public demand for law and order, giving the FN a substantial lift at a quarter of the vote in the 2014 European and 2015 regional ballots.

Marine Le Pen is set to best exploit her current window of opportunity. Since her accession, she has been seeking to detoxify the FN, producing notable changes to the party’s narratives and communication style.

The FN has dropped Jean-Marie Le Pen’s incendiary anti-Semitism and it has recruited a younger generation of activists. Marine Le Pen has also been triangulating core left-wing Republican values such as laicity and gender equality, mostly to target Muslims.

While abandoning some of the FN’s oldest policies such as anti-abortion and death penalty, the 2017 platform retains its previous supply of radical right anti-immigration nativism however. Ethno-nationalist and welfare-chauvinist policies dominate the party’s presidential agenda which continues to pledge for national priority to the French over foreigners for social benefits, housing and jobs.

The FN’s economic platform shows a heterogeneous mix of leftist social policies combined with a touch of market liberalism, embedded in economic nationalism and hardline Euroscepticism. Opposition to the EU is central to Le Pen’s presidential bid which capitalises on public dissatisfaction with the EU’s management of the financial and refugee crises. Since last year, the FN has been seeking to seize the Brexit momentum, calling for France to leave the European Union.

Finally, the FN continues to operate on anti-political-establishment populism, being disparaging of ‘corrupt’ elites while claiming to speak “in the name of the people”, Marine Le Pen’s presidential motto this year. Since 2012, repeated financial scandals in the Socialists and center-right Republicans have added to the distrust of mainstream parties, and many voters doubt their capacity to change the country.

Behind Marine Le Pen’s success. Who votes for the FN?

European radical right parties such as the FN notoriously manage to translate economic grievances into cultural hostility towards immigrants. These parties are over-represented among working class and voters with lower cultural assets who are generally more likely to exhibit pro-welfare nativist preferences.

The FN’s anti-immigration and protectionist agenda resonates predominantly with all the ‘left-behind’ in French society, who are affected the most by economic modernisation, ethnic competition and feelings of cultural insecurity.

Current polls suggest that Marine Le Pen could win four in ten blue collar and lower-salariat voters. Recent studies show also that support for the FN is getting stronger among the poor and the jobless.

Beyond the so-called ‘losers of globalisation’, however, the FN is increasingly reaching out to a broader section of the electorate. The party has made significant inroads among the younger cohorts of voters and those economically active. While keeping with its previous petty-bourgeois electorate, its base of support has expanded to include a sizeable share of voters in the public sector, especially clerks in the lower categories and members of the security forces.

Overall, education remains the most important factor of voting for the FN. Support for the party declines among highly-skilled and well-educated voters, as well as among older conservative voters with greater economic assets, who are very sceptical of Le Pen’s plan to leave the EU.

In an interview with several European newspapers, outgoing French President Francois Hollande said that his “ultimate duty” before leaving office is to prevent Le Pen from winning the upcoming presidential election in France.

“My ultimate duty is to make sure that France is not won over by such a program, and that France does not bear such a heavy responsibility,” Hollande emphasized.

Hollande added that the “threat” of a Le Pen victory “exists,” because “the far right haven’t had such high level [of support] for the past 30 years,” Le Monde reported.

The vote on April 23, as well as on May 7, will “determine not only the path of our country, but also the future of Europe and the way that it’s built.”

Since February 28, 2017, Google News Lab and the European Journalism Center (EJC) have coordinated French and foreign companies for the duration of the French presidential election campaign.

Both organizations rely on the experience of ProPublica, which directed the media against Donald Trump during the US election campaign.

They not only bring together media, but also schools that provide them with "experts".

Companies that have reached an agreement with Google News Lab and the European Journalism Center (EJC) for the duration of the French presidential campaign are:

For example: during the transition period, Buzz Feed News published a hoax stating that the Russian intelligence services had a compromising file against candidate Donald Trump. Moscow would therefore have been in a position to blackmail the President of the United States. ProPublica’s partners had largely republished this "verified" allegation, despite the protests of the president-elect. It has proven to be purely defamatory.