Raju, a construction worker from Punjab, was introduced to the canteen by his co-workers. "I earn 400 rupees a day. Before these canteens came up, I used to spend at least 150 rupees on food per day. Now I spend only 20 rupees a day," he says.

Could we try something like this in the United States, I wonder?  I caution that these canteens are controversial -- something not mentioned in the glowing BBC report below. See the Wikipedia article for details about the subsidy program and complaints about it. In one sentence the biggest complaints are that corporations that subsidize the canteen food claim they are losing "massive" amounts of money, and pushcart food vendors can't compete with the very cheap meals sold by the canteens. That's right they can't, and it might also be argued that the canteens are a clever vote-buying scheme for Tamil Nadu's chief minister. But here's the bright side, from the Beeb report:

The canteens have helped poor and lower middle-class families massively slash their food bills and freed the womenfolk from the daily drudgery of cooking and cleaning.

And work in the canteens, which are run exclusively by women, provides employment for thousands of women.

I really like the part about greatly lowering food bills, and that the food isn't free, thus avoiding the welfare mentality that crippled entire generations in America.

Maybe if the program spreads across India the canteens could be more profitable and the corporations could get some federal assistance with the subsidies.

As for buying from the street vendors, it's like eating at fast food restaurants every day in the USA -- the expense piles up for low- and middle-income workers. On the other side, the vendors can and do offer food that isn't available on the no frills vegetarian canteen menu. 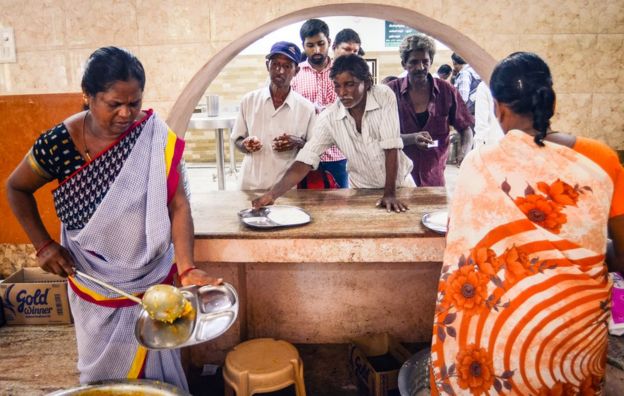 The Tamil Nadu Chief Minister J Jayalalithaa's "amma canteens", which serve cheap meals to hundreds of thousands of people daily, have become immensely popular with the poor and the middle classes. The BBC's Geeta Pandey samples the treats at a canteen in Chennai (Madras).

It's just a few minutes after noon on a hot summer day as I join the queue of lunch-goers at the amma canteen in Pallavaram town, just outside the state capital, Chennai.

The menu today includes hot sambhar rice (rice cooked with lentils and spices) and curd rice (rice cooked in yogurt with curry leaves). The former is selling for five rupees (seven cents; five pence) a plate while the latter costs just three rupees - a fraction of what the dishes would cost in any other restaurant.

I'm famished so I buy a plate of each and move to one of the tables in the centre of the room to eat.

If you're after a fine dining experience, this place is not for you.

The heat and the humidity can be a bother and the sambhar rice is a bit too spicy for my north Indian palate.

But my fellow diners, men and women who include poor daily wage labourers, housemaids, college students, and middle-class office workers, are not complaining.

The portions are big and most describe the food as "delicious".

Lakshmi, who works in the neighbourhood as a housemaid, is a regular at this canteen.

"Earlier, my employers would give me leftovers, but now I come here for breakfast, lunch and dinner every day. For less than 20 rupees, I can eat three meals here," she tells me.

"This food is really good. I like all the dishes. My stomach's full and I'm happy," she says, patting her belly.

Raju, a construction worker from Punjab, was introduced to the canteen by his co-workers.

The canteens were first started in 2013 in Chennai by Ms Jayalalithaa, who is popularly called amma (mother) - hence the name amma canteen - with the aim to provide subsidised meals to the public.

Today, there are more than 300 such eateries in the state - at least half of them in Chennai alone. They serve simple breakfast, lunch and dinner every day of the week.

"Our chief minister started these canteens to provide good, cheap food to the people. It has also generated employment for thousands of women. The canteens are run by women who cook, clean and serve."

And the scheme has served Ms Jayalalithaa well too.

The canteens have helped poor and lower middle-class families massively slash their food bills and freed the womenfolk from the daily drudgery of cooking and cleaning. And their gratitude has often translated into votes for Amma.

A year after the scheme was launched, Ms Jayalalithaa's party won 37 of the 39 seats in the 2014 parliamentary elections.

In April, her party was re-elected in the state assembly polls and analysts say the canteens are among the reasons for her victory.

At the canteen, I come across S Shweta and S Pavitra - two young women who work as salesgirls in a telephone showroom nearby.

This is their first visit to an amma canteen and to mark the occasion, they are taking a selfie with their plates of rice.

The photograph, they tell me, will be uploaded on their Facebook accounts.

"This is a great initiative. Where else can poor people eat a full meal for five rupees? We support amma," says Ms Shweta.

As the popular saying goes, the way to a man's - and presumably also a woman's - heart is through the stomach. And Ms Jayalalithaa knows it well.

What's on the menu?


This is the seventh article in a BBC series India on a plate, on the diversity and vibrancy of Indian food. Other stories in the series:
The Indian street food bringing theatre to your plate
Inside India's 'dying' Irani cafes
What Indians have done to world cuisine
The story of the samosa
Cooking the world's oldest-known curry
Why India is a nation of foodies
[END REPORT]
*******
Posted by Pundita at 11/12/2017 04:22:00 AM