KABUL (Reuters) - Militant group Islamic State on Tuesday claimed responsibility for an attack on a television station in Kabul, in which gunmen disguised as police killed a security guard and opened fire on staff, the latest assault on media workers in Afghanistan.

Afghan special forces suppressed the attack on Shamshad TV, a private Pashto-language broadcaster based close to the national stadium, after about two hours, but police said at least two people had been killed and 20 wounded.

“People dressed in police clothes came in and initially threw hand grenades, which killed one of our guards and wounded another,” Abed Ehsas, Shamshad’s news director told broadcaster Tolo News TV.
“After that, others got into our building and started firing. Some of our colleagues were hit, though, thank God, many others managed to get out. Some were wounded by gunshots, falling glass and when they jumped from high floors.”
During the attack, a special forces unit blasted a hole in the concrete wall around the compound and entered the site amid a crack of gunfire. At least one attacker was killed during the operation, while another was killed at the compound entrance.
In a statement on its news agency Amaq, Islamic State claimed responsibility, without giving evidence. The group, based mainly in the eastern province of Nangarhar, has claimed a number of attacks on civilian targets in the Afghan capital.
Shortly after the beginning of the attack, the Taliban’s main spokesman, Zabihullah Mujahid, issued an immediate denial of involvement.
[...]
END UPDATE 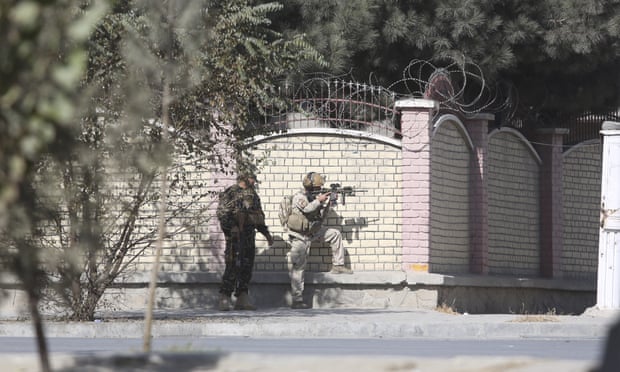 
"Last Tuesday a suicide bomber, believed to have been as young as 12, struck Kabul’s heavily fortified diplomatic quarter and killed at least five people, showing that militants can still hit the heart of the city."

Gunmen have attacked a private television station in Kabul after breaking into the building following an explosion.

Many staff were still inside, an employee told AFP, describing the attack as ongoing.

“I saw three attackers on security cameras entering the TV station building. They first shot the guard and then entered the building. They started throwing grenades and firing,” said Faisal Zaland, a reporter from Shamshad TV, who escaped through a back door.

Shamshad, a Pashto language station that broadcasts across Afghanistan, was transmitting a holding image instead of its normal programming.

Zaland said security forces were in the area of the Shamshad compound in the Afghan capital “trying to bring down the attackers”.

“Many of my colleagues are still in the building,” he added.

Zabiullah Mujahid, a spokesman for the Taliban, denied in a Twitter post that the militant group was involved in the attack.

The interior ministry said it was investigating the incident but had no further details.

Kabul has been rocked by a series of deadly attacks in recent weeks as the Taliban and Islamic State insurgents step up offensives against security installations and mosques.

Last Tuesday a suicide bomber, believed to have been as young as 12, struck Kabul’s heavily fortified diplomatic quarter and killed at least five people, showing that militants can still hit the heart of the city.
Security in Kabul has been ramped up since 31 May when a truck bomb went off on the edge of the “Green Zone”. Around 150 people were killed and 400 others were wounded.

Special truck scanners, barriers and permanent and mobile checkpoints have been rolled out across the city.

The last major assault in Kabul was on 21 October when a suicide attacker hit a bus carrying Afghan army trainees, killing 15.

A day earlier a suicide bomber pretending to be a worshipper blew himself up inside a Shia mosque in the city during evening prayers, killing 56 and wounding 55.