Assange being removed from Ecuadorian Embassy in London 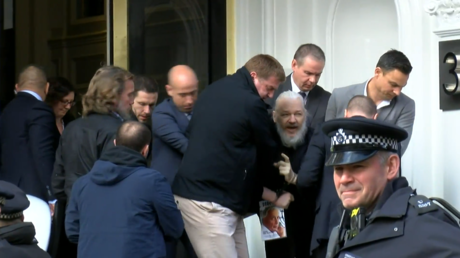 Assange was taken into custody at a central London police station, and the arrest was made at a US extradition request, the Met Police have confirmed, saying he will appear at London Magistrates’ Court.
Julian Assange has been “further arrested on behalf of the United States authorities after his arrival at a central London police station,” the Metropolitan Police confirmed. The US cited the Extradition Act while filing the request, they informed.
“He will appear in custody at Westminster Magistrates' Court as soon as possible,” the statement reads. A car apparently carrying Assange has arrived at the court earlier.
Earlier in the day, Jen Robinson, one of Assange’s legal team, alleged that the arrest was linked to a US extradition request. “Just confirmed: Assange has been arrested not just for breach of bail conditions but also in relation to a US extradition request,” she tweeted.
[...]