How Beer Saved the World 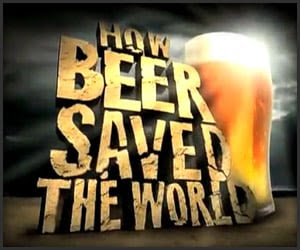 The Awesomer website cautiously announced ahead of the hour-long documentary's premiere on January 30, "We're not sure if the Discovery Network is playing an early April Fools Day prank or if there’s truth to the stories behind their special about beer’s world-transforming properties."

It was no prank: amazingly, astoundingly, laugh aloud in astonishment and delight, it turns out that beer had a key role in raising up civilization, sustaining it and pushing it forward. As one historian said during the film the most accurate marker for human history is actually beer. And the world has filmmakers at the Discovery Network cable channel to thank for bringing this stupendous news to the attention of the general public.

Beer. Who knew that beer played a key role in the building of the pyramids and the founding of America? Or that it played a life-saving role in many societies where much of the available water was unfit to drink? And that pivotal sciences, technologies, medicine, engineering marvels and mathematics of the ancient and modern world were driven by the beer-making process and the quest to improve beer, preserve and bottle it?

Even the demise of child labor in the United States was brought about by beer -- more specifically by the mass production of glass beer bottles, a process that predated Henry Ford's assembly line -- because the making of handmade glass was the biggest user of child labor.

"How Beer Saved the World" is an engineering marvel in itself. Probably the role that beer played in a particular field of endeavor is known within the field. But the documentary strings together all those roles so that beer's great importance to civilization emerges. The saga of beer is also beautifully told in the documentary with animation, reenactments, historical footage, riveting anecdotes, and all tied together with a big helping of wry humor.

The documentary will air again on February 14, at 8:00 PM (probably with a re-run later in the night) but I'm betting it will be so popular, once word gets around about the show, it'll air several times this year.

As to whether the saga will continue in the present era: the documentary ends with a look at efforts to make beer drinkable during commercial space travel -- a task easier said than done because burping at zero gravity in confined quarters is not a good idea.

But I was struck by the beer drunk by Egyptians in the ancient era; low in alcohol content (3 percent), chock full of vitamins and minerals and an antibiotic that was not formally discovered until the 1940s, it was the diet staple and as much food and medicine as drink. So one shouldn't wonder why the ancient Egyptians were known as a good-natured people.

Formulas for the Egyptian beer have been preserved; maybe it's time to resurrect some version of it and bottle it in medicinal quantities. Such a beer might wean moderns from substance abuse and pill popping for a host of minor ailments both mental and physical, and in general promote a more phlegmatic attitude about life's bumps and sprains.