Goodbye Mr Cameron and don't let the door slam behind you

British Prime Minister will address the country at shortly after 6:00 AM BST.

“As far as Labour voters are concerned, there are two issues. There is obviously immigration, but beneath that there is a whole set of issues about people’s lives and the fact that they don’t feel politics is listening to them.”

Corbyn will admit that the result paints a picture of a “divided country” and say that his party needs to begin the uphill struggle of re-engaging with working-class voters whose fury about immigration, wages and public services have led them to vote out. 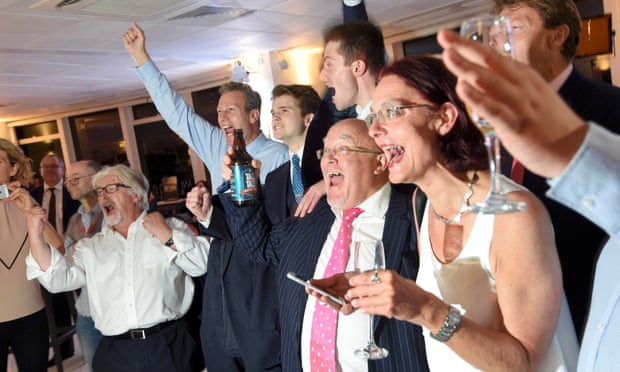 The British people have voted to leave the European Union after a historic referendum in which they rejected the advice of the main Westminster party leaders and instead took a plunge into the political unknown.


The decision in favour of Brexit, following a bitterly close electoral race, represents the biggest shock to the political establishment in Britain and acrossEurope for decades, and will threaten the leaderships of both the prime minister, David Cameron, and the Labour leader, Jeremy Corbyn.
The value of the pound swung wildly on currency markets as initial confidence among investors expecting a remain vote was dented by some of the early referendum results, triggering falls of close to 9% and hitting its lowest level against some foreign currencies since 1985. Jeremy Cook, chief economist and head of currency strategy at WorldFirst, said: “Sterling has collapsed … It can go a lot further as well.”
By 4am, a series of key results signposted a likely leave victory. After a lower-than-expected margin of victory for the remain campaign in Newcastle, where it won the backing of 54% of voters, there was a jolt after midnight when leave captured Sunderland with 61.3% of the vote in a city which has traditionally been a Labour stronghold.
Cameron is expected to address the nation from Downing Street shortly after 6am, and leaving lead campaign Boris Johnson is likely to make a statement shortly afterwards.
Speaking at a party in Westminster, the Ukip leader, Nigel Farage, declared Friday the UK’s “independence day”, and said the referendum result was a “victory for real people, a victory for ordinary people, a victory for decent people”.
Hilary Benn, the shadow foreign secretary, has said Cameron will have to resign if the UK votes for Brexit. “If there were to be a vote to leave, then as far as the prime minister is concerned I don’t see how he is going to remain in his job for very long at all,” he said.
Alan Johnson, the former home secretary and leader of Labour’s remain campaign, said earlier that he thought Cameron would have to quit if leave had won.
On Thursday evening Cameron was backed by 84 pro-Brexit MPs to remain as prime minister whatever the result, but around 50 did not sign the letter, meaning there could be enough to trigger a vote of no confidence.
Cameron has said he wants to stay on to trigger article 50 and start negotiations to take the UK out of the EU in the event of a vote to leave but there is likely to be considerable pressure for him to quit given the public’s defiance of his forceful calls for the UK to remain in the EU.
There was continued joy at leave parties during the night as swing areas across England delivered wins, often of a much larger magnitude than forecast.
The first declarations in some larger areas of London saw fleeting scraps of good news for remain but it was short-lived as traditional election marginals backed leave. Nuneaton, a central English town seen as a bellwether of middle England delivered a 66% vote for leave.
In Wales too, leave voters were dominant, after at least 18 of the 22 Welsh authorities had declared. Only three – the Vale of Glamorgan in the south, Monmouthshire in the south-east and Ceredigion in west Wales – voted to remain.
As expected, remain won in Scotland, although margins of victory and turnouts fell short of what was needed to stop the leave juggernaut in the southern parts of Britain.
Corbyn will admit that the result paints a picture of a “divided country” and say that his party needs to begin the uphill struggle of re-engaging with working-class voters whose fury about immigration, wages and public services have led them to vote out.
John Mills, a major Labour donor who has been campaigning for leave, said his party’s mistake was to link itself so closely to the in campaign, instead of understanding the concerns of its traditional voters.
Recriminations are already flying within the party, with some blaming Corbyn for failing to campaign robustly enough, while others have pointed the finger at Nicola Sturgeon, the SNP leader, saying that she spent too much time attacking the remain camp and saying her “lacklustre” efforts resulted in a low turnout in Scotland.
A source within the SNP hit back at what she called a “poor attempt by Labour to deflect from its own campaign”. She said her party was securing remain wins across the country, while Labour had lost in its in heartlands.
Sturgeon was expected to speak on Friday morning, touching on the possibility of a second Scottish referendum after her country voted to remain in the EU, in contrast to England. Much of London voted convincingly to remain.
The vista of a sharply divided country with particular fault lines opening up between London and other English communities was repeatedly raised by Labour MPs reacting to the results.
The former Labour leader Ed Miliband said: “It’s a nation divided and the PM will have a big responsibility – particularly if it’s a remain win – to show he understands what people are saying on the leave side of the argument. Labour faces that responsibility too.
“As far as Labour voters are concerned, there are two issues. There is obviously immigration, but beneath that there is a whole set of issues about people’s lives and the fact that they don’t feel politics is listening to them.”
Pat McFadden, the party’s MP for Wolverhampton South East and a former shadow Europe minister, said: “It shows a country just split down the middle. Certainly for people voting to come out, immigration is very high on their list of concerns but there is also something else here too, a real sense of pessimism among people and their place in the UK.”
[END REPORT]