If you think you know how bad Beijing's air pollution is, read this BBC report

"For much of the past month the cloud of toxic air hanging over this country has extended for thousands of miles, a giant, continent-sized cocktail of soot from coal fired power stations and car exhausts, smothering the lives and filling the lungs of hundreds of millions of people."

But that's not the half of it; it turns out that only the most draconian precautions can protect Beijing residents from the pollution while they're indoors -- precautions that are financially out of reach for most Chinese.

The photos accompanying the BBC report include this one: 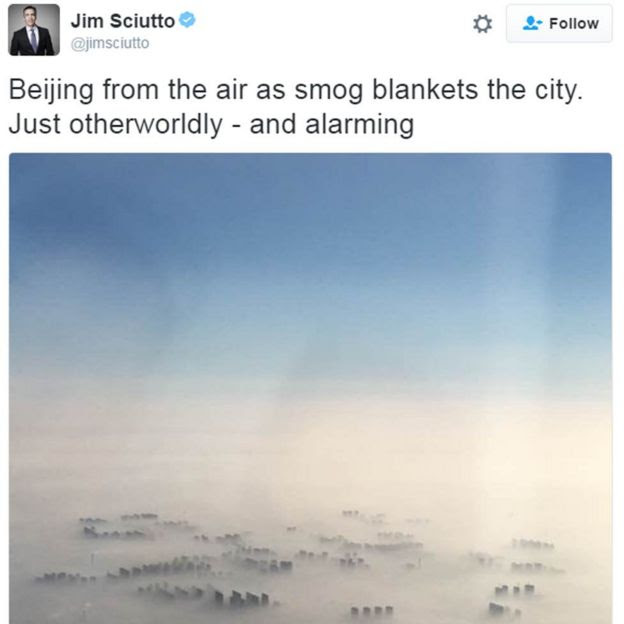 China's capital is notorious for its chronic pollution. Even indoors it's a struggle to find clean air, says John Sudworth.
Having already taped most of my windows shut, I have now started on the air conditioning vents. The aim is simple - to close off every access point through which the toxic outside air leaks into our Beijing home.
Even our double-glazing doesn't keep out the smog. The most dangerous constituent, particulate matter smaller than 2.5 microns in diameter - or PM2.5 as it's known - finds a way through the tiniest of gaps where the windows close.
So the only solution there is duct tape.
It's like a re-enactment of a 1970s government information film on surviving a nuclear holocaust. Only it's not radiation we're trying to keep at bay, but the fallout from fossil fuels.
The most useful device in our armoury is our PM2.5 monitor. We have two, one upstairs and one downstairs, which we glance at frequently, and it was their arrival that prompted the frenzy of taping and draught-excluding that continues to this day.
When I first arrived in China, five years ago, there was no way of monitoring the quality of air in our home. Like everyone else, we left it to blind faith that our air purifiers were doing the trick.
It now transpires they weren't. Even now on highly polluted days, we struggle to get our PM2.5 count much below 25 micrograms per cubic meter, the World Health Organization's maximum standard for safe air.
And that's with multiple purifiers running at full tilt, large box-like machines that sit in the corner of every room - two in some - the combined noise output of which is akin to living in the engine room of an aircraft carrier.
hina's air pollution problem is now so bad that its effects are measured in more than a million premature deaths a year and markedly reduced life expectancy - an average of more than five years or so - in the worst-affected regions.
Over the past few weeks, a period of particularly acute and prolonged air pollution, the average air quality in Beijing has been well above 200 micrograms of PM2.5 particles per cubic metre - many times the maximum safe limit.
During the worst of it, it's been like living under house arrest, our children confined to the small, deafening but breathable indoor space of our home for days on end.
And across China, the smog becomes a dominant topic on social media, with the population tracking the foulness of the air via mobile phone apps.
One group of Beijing mothers, armed with their own PM2.5 counters, have even been roaming the city in search of shopping malls or cafes with filtered air - and then sharing their discoveries online.
Of course, humanity's dependence on oil and coal long predate China's economic rise. But China offers a vision of environmental degradation far in excess of the pea-souper fogs of 1950s London or Manchester.
For much of the past month the cloud of toxic air hanging over this country has extended for thousands of miles, a giant, continent-sized cocktail of soot from coal fired power stations and car exhausts, smothering the lives and filling the lungs of hundreds of millions of people.
While growing awareness means that more of them are now taking action to protect their health, many others are either not fully informed about the danger or don't have the means to do much about it.
A set of new filters for a single air purifier can cost £100 ($120) or more and needs changing every six months or so.
It is, of course, not a problem only of China's making. The smartphones, computers, TV screens, jeans and shoes that have been pouring out of its factories over the past few decades are cheap, in part at least, precisely because they're made without environmental safeguards.
The interests of the rich world and an unaccountable Chinese Communist elite have neatly dovetailed. The West gets its cheap consumer desirables and China gets rich without the inconvenience of the independent scrutiny, regulation or democratic oversight of other markets.
The true cost is measured by the numbers on my pollution monitors, and it is one being borne disproportionately by ordinary Chinese people.
Following a crackdown on a rare protest against pollution in the central city of Chengdu recently, one blogger dared to speak out in favour of the protesters. The police, he suggested, should bear in mind that the elites, whose interests they protect, have sent their families to breathe clean air overseas.
He was promptly detained.
[END REPORT]
********
Posted by Pundita at 1/16/2017 06:03:00 AM