(The update is a postscript at the end of this post.)

"b" at Moon of Alabama clearly thinks so. From his January 9 post, ISIS, Al-Qaeda and U.S. Air Force Wage War On Syria's Public Utilities:

Currently a campaign is waged by the Takfiri forces opposing the Syrian government and by the U.S. to deprive the people under its protection of all public utilities - water, gas and electricity. After the start of the current blocking of the water supplies to Damascus and its 5.6 million inhabitants we noted:


This shut-down is part of a wider, seemingly coordinated strategy to deprive all government held areas of utility supplies. Two days ago the Islamic State shut down a major water intake for Aleppo from the Euphrates. High voltage electricity masts on lines feeding Damascus have been destroyed and repair teams, unlike before, denied access. Gas supplies to parts of Damascus are also cut.

This campaign against basic infrastructure has since continued. U.S. supported "rebel" groups take part in it. Al-Qaeda in Syria, aka Jabhat al Nusra, does its share in Wadi Barada. The U.S. military just bombed another Syrian power station. In 2015 it had already waged a campaign against such installations, creating huge material damages.

Since three days Deir Ezzor and surroundings have no electricity at all.

Yesterday ISIS again joined the campaign and blew up a huge gas processing facility in Hayyan in east Homs. Hayyan is the largest such station in Syria and provided electricity, heating gas and cooking gas for all of south Syria including the capital Damascus.

This is a systematic, wide-ranging campaign against Syrian infrastructure designed to deprive the people living under government protection of the basic necessities.

If you asked the U.S. government it would of course say that such a campaign does not exist and is totally not coordinated by the U.S. and its Gulf proxies. [The government would say it] is just coincidence that U.S. supported "rebels", al-Qaeda, ISIS and the U.S. air force all hit the same category of targets in Syria at the very same moment in their war against the Syrian people.

Okay, but consider what Thierry Meyssan at Voltaire Network dug up and published on January 7, and which involves the White Helmets:

The Jihadists, who since 24 December 2016 have been polluting the sources of Barada -- the river which provides the water supply for the inhabitants (now totalling more than 7 million) of Damascus and the region -- and that have exploded its canalization, have published a declaration [above] laying down their conditions.

Currently, 5.6 million civilians have been completely cut off from running water for more than two weeks. The authorities have managed to harness lorries with tanks to supply the population, once or twice a fortnight, with non-potable water, at the rate of 50 litres per family. In addition to the containers that they could fill for washing themselves and their washing up, the inhabitants have to buy mineral water to consume drinking water.

Under the «Declaration of Barada», the jihadists will not allow engineers to clean and restore the sources of Barada unless the Arab Syrian Army and the Hezbollah stop fighting (that is, if the Arab Syrian Republic surrenders).

In a letter addressed to the Security Council, Syria has denounced the planning of this operation by the powers that support and arm the jihadists.

The Document features seven jihadist signatory groups and one of these is the « White Helmets », called « the Syrian Civil Defense ». This « humanitarian NGO » (sic) has been created and is led by an MI6 officer, James Le Mesurier, who had been elevated by Queen Elizabeth, in 2016, to the position of Officer of the British Empire. This organization floods the media with shocking images meant to prove “the crimes of the regime”. It has often been demonstrated that the images are no more than the acting out of pure propaganda.

Testimony has been delivered on the participation of this « Humanitarian NGO ». The Russian Minister of Defense has described it as« close to Al-Qaeda ».

The White Helmets are funded by Germany, Denmark, the United States, France, Japan, Holland and the United Kingdom.

On 19 October, the President of the French Republic, François Hollande, his Minister of Foreign Affairs, Jean-Marc Ayrault, and the President of Foreign Affairs of the National Assembly, Elisabeth Guigou received at the Elysee, a delegation of White Helmets including the Chair of the “Civil” committee of Aleppo (sic) the self-proclaimed «Mayor of Aleppo» (re-sic), Hagi Hasan Brita.

France had presented to no avail, the candidature of the White Helmets for the Nobel Peace Prize.

In international law, depriving civilians of water is considered a war crime.

[The only person I recognize in the photo is Hollande] 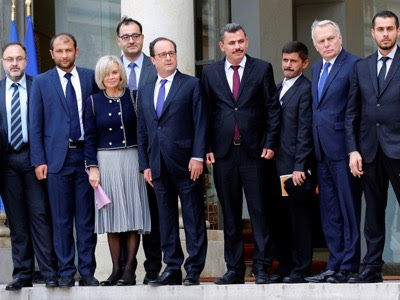 I wish Thierry had named all the "jihadi" signatories to the document, which could provide more clues about who ordered the strikes against the utilities.

But for now, I don't consider the Gulf Arab governments to be U.S. "proxies," as b termed them. And I can't see Al Thani or Al Saud taking orders from President Obama with regard to Syria.

I do see the British and possibly also the French government taking orders from Al Saud when it comes to the campaign in Syria. And when I consider the Saudi campaign in Yemen, which has consistently targeted civilians and critical civilian infrastructure, the concerted attack on Syria's public utilities is something I can easily imagine the Saudis ordering.

Add to this the White Helmets, who while funded by a variety of governments was clearly the brainchild of the British government. Given that line of reasoning, I'd assume that they take their orders from MI6.

So when I put it all together, I'd want to know whether b is certain that it was a U.S. jet(s) that bombed a power station, or a jet that is part of the U.S.-led coalition operating in Syria. Such as a British or French jet.  (Confusion about the identity of a jet in the coalition has happened before during the Syria campaign.)

This isn't to let the U.S. government off the hook. But if my reasoning is in the ballpark, then the accusation should be broadened to include governments in the coalition that have bomber planes operating in Syria.

And I note that from Thierry's description of the letter of protest sent by Syria's government to the UN Security Council, the Syrians seem to believe more than one foreign government is involved in ordering attacks on the utilities.

As Thierry notes, depriving civilians of water is a war crime. This returns me to the copy of the document that Thierry posted, and the question about the other signatories. If most or all take their orders from Al Saud/Thani, I think that should raise a red flag about which government(s) ordered the attacks on the public utilities.

I also think b has presented enough information to make it a plausible argument that one or more governments in the U.S.-led coalition did indeed collude with acknowledged terror organizations to attack Syrian utilities.

I think it's important to attempt to nail down whether governments other than the U.S. are involved with the terrorist attacks on the utilities because the Obama administration will be gone in a few days. And even if they could eventually be held accountable, the task is to get the attacks stopped quickly.