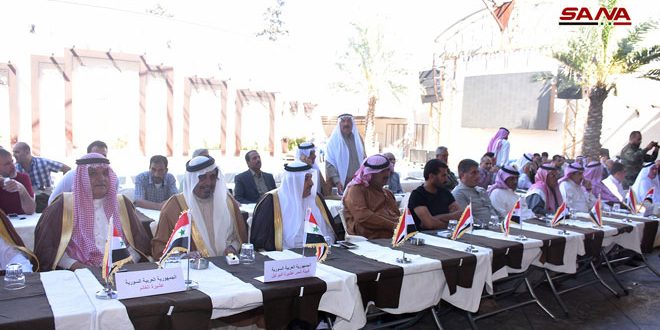 A number of national Kurdish figures rejected foreign interference in Syria's affairs and any attempt to divide Syria.

(ALEPPO) SANA - July 8, 2018 - A forum of 55 clans and tribes in Aleppo province asserted solidarity with the Syrian Arab Army in its war against terrorism and facing foreign interference in Syria’s affairs, sovereignty and territorial integrity.
Arab and Kurdish tribes in Aleppo stand in the same trench with the Syrian Arab Army led by President Bashar al-Assad in facing the Turkish aggression and its backers, particularly the US and France and other Western states, and in combating terrorism until all illegitimate forces from Syria are eliminated, the clans and tribes said in a statement at the end of their forum held Saturday.
The forum was held under the title “In Retaliation for the US, French and Turkish Interference in Syria”
A number of the national Kurdish figures expressed rejection of any attempt to divide Syria and of the foreign interference in its affairs.
For their part the elders and dignitaries of the tribes rejected all types of aggression against Syria, affirming that the Syrians will stay united side by side with the Army in defending the homeland and facing whoever tries to interfere in its affairs.
They also rejected the existence of any US, French or Turkish forces on the Syrian territories.