Egypt's President brings home the, er, lamb chops. Now if he can only bring in the water. 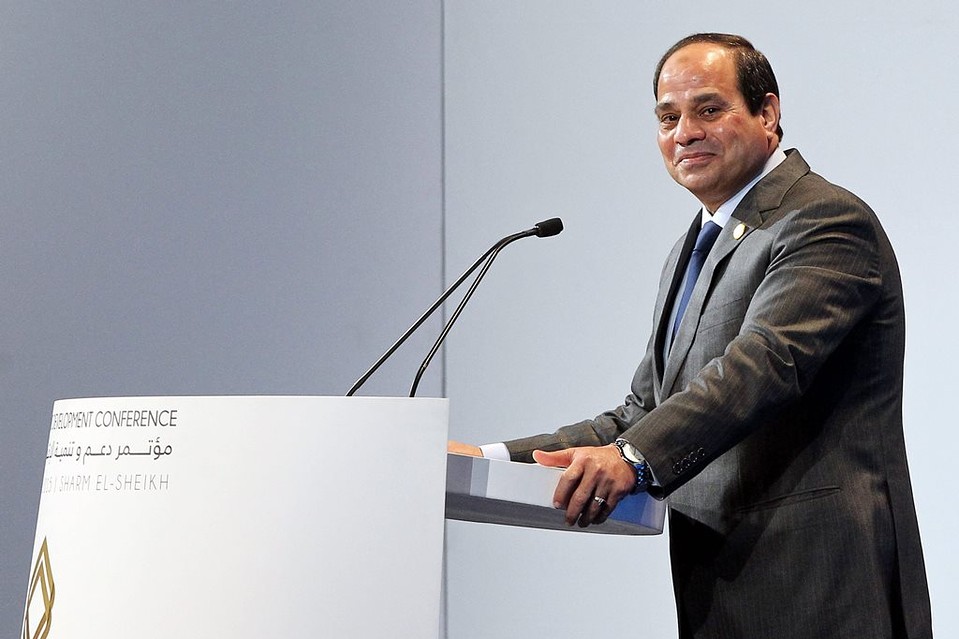 Of course American Leftists, for reasons shared only amongst themselves and the U.S. Department of State and White House and Pentagon, are still mourning the Muslim Brotherhood's loss of power in Egypt. So I take with a grain of salt the Atlantic's sour grapes view of President Abdel Fattah el-Sissi. Nuts to them. The adults are now in charge in Egypt and everyone in the Middle East knows this.

President Sissi walked away from this past week's 3-day international economic conference in Sharm el-Sheikh with deals that are as much votes of confidence in his leadership and administration as a big pot of money. As a scion of Egypt's wealthiest family put it to the Associated Press:

“Egypt is the most stable country in this big mess. We’ve acknowledged the mess in Libya, the mess in Iraq, in Syria,” he said. “The fact is, Egypt is solid, Egypt is stable. We are actually the last pillar of resistance against uncertainties.”

The billionaire, Naguib Onsi Sawiris, also announced he was tossing $3 billion into the investment pot to support development in Egypt's energy sector. Just how big is this pot, so far? To be precise it's:


... investment deals worth more than $138 billion on the first two days of the conference, while [Egypt's] Arab Gulf neighbors—Saudi Arabia, Kuwait and the United Arab Emirates—pledged another $12 billion to help stabilize its economy. The total amount of investments it sealed at the conference is expected to rise after Sunday’s numbers are added, officials said,"

That's according to the Wall Street Journal. Not bad for a 3-day confab, although President Sissi made it clear he wants to scare up another 100 billion or so.  But it was certainly a "golden moment" for Egypt enthused a UAE securities analyst, reported Gulf News.  The golden moment isn't arriving a moment too soon.  To return to the WSJ:

To that extent, launching massive infrastructure projects would not only boost the economy but also help create jobs quickly.

Among the various such projects unveiled at the conference, Egyptian officials also announced plans to build a gigantic new administrative and business capital east of Cairo with the help of the United Arab Emirates. Officials hope the development will accommodate seven million people and generate 1.5 million jobs.

But for Egypt to attract the massive investments it seeks, the country will have to deliver on the promises it has made at the conference, and execute the development projects it has launched, analysts said.

The UAE analyst quoted by Gulf News chimed in with these words of wisdom:


“The Egyptian government should work towards removing some obstacles stalling the development process including reforms in labour laws and repatriation of investment and exchange of liquidity.”

The decision of the UAE government to support Egypt is a strategic one, he said. “It is an investment in the future. The UAE is investing for the stability of the Arab world.”

A number of UAE companies signed multi-million dollars worth of deals with the Egyptian government for investment in energy, retail and leisure sectors apart from an offer of $4 billion from the government to support the Egyptian economy.

As to the new capital -- from the housing minister's description it's more a large extension of Cairo, to be built in phases, than a "Potemkin" capital out alone in the desert, as the Atlantic writer tried to characterize it.  And it's actually an extension of the other mega-projects that President Sissi launched -- the much-needed expansion of the Suez Canal, and an industrial zone fronting it.

To top if off, as the Atlantic suggests, Egypt's government will receive a great deal of financial assistance in building the city -- from UAE and probably other Gulf Arab countries as well.

All the planning fits together, and the new capital will be more of an administrative conclave than anything else. This removal of the huge number of government buildings in Cairo to a suburbs connected by new highways will open up housing in the city proper -- something I wish could be done in Washington, DC. It will also relieve the gridlock in Cairo -- something else I wish would happen to the District of Columbia. The truth is that Cairo's population has simply outgrown the city.

I have just one question.  Where is the Egyptian government going to find all the water needed for these tremendously ambitious plans?  I came across several mentions of the word "development" in news reports on the investment conference and extension of Cairo, but not one mention of a plan, ambitious or otherwise, to deal with Egypt's massive water issues.

Yet here is the reality. From a March 2014 report by Al-Monitor (Egypt faces drinking water shortage because of Nile pollution):


[...]
Minister of Water Resources and Irrigation Muhammad Abdul Muttalib said in an interview with Al-Monitor that the allocation of water that is released daily from behind the High Dam is done so according to the schedule set for the actual water needs for drinking, agriculture, industry and other development purposes.
[...]
He added that it is no longer possible to release more water into the Nile, to wash away the pollutants into the sea, because the increased demand by the growing population has caused water to be scarce. He added that they are working on eliminating the various sources of pollution and have taken measures to close all establishments that pour untreated waste into the Nile.
Abdul Muttalib added that Egypt is among the countries below the water poverty line and that it relies on the Nile for its essential needs. Egypt’s share of the Nile does not exceed 55.5 billion cubic meters (1.9 trillion cubic feet) a year, most of which comes from the Ethiopian plateau during the flooding in the summer starting in August.
He said that for this reason water is stored in Lake Nasser to be used during the rest of the year and that the ministry is working through the public authority for the High Dam and the Aswan Dam on a program that organizes water usage. That program will regulate the winter period, which is essential for distributing a limited amount of water throughout the year whereby water usage is optimal.
He said that Egypt is forced to release water from Lake Nasser’s strategic reserve in addition to the daily quota during some emergency cases when the government gets reports that the pollution level went above the allowed standard and for fear that the water quality at drinking stations will be affected, otherwise people will die as a result of the water pollution. [...]

The report also mentions mass poisonings from drinking polluted Nile water. I emphasize that the report relates specifically to drinking water -- a surprise for me because I have seen other reports that say Egyptians still have plenty of drinking water. Yes, well, from the Al-Monitor report, it's just that the drinking water is often not safe to drink.