At the UN Obama and Putin lay out opposing world views, and did Vogue magazine launch Armageddon?

Last night John Batchelor, host of the John Batchelor Show, and Stephen F. Cohen, New York University and Princeton professor Emeritus, analyzed the world views represented in the speeches. Here is the link to the podcast of the discussion.

The gist of the two views:

President Putin argues that Russians had learned from their Soviet experience that no doctrine, no matter how seemingly good and necessary to its adherents, justifies its imposition on other peoples to the point where their sovereignty is ignored and their social order is reduced to ruins.

President Obama argues that democracy is so precious, so incredibly important to human progress, that an "international community" may be justified in ignoring national borders, which are an anachronism anyhow in the days of globalization and social media, in order to promote and uphold it. As to the ruins, the democratic process isn't perfect, after all, but the international community working assiduously together can rebuild the ruins into a strong democratic society.

But I have a question not raised in the discussions. In his speech President Obama in referring to Syria's government said,

Let’s remember how this started. Assad reacted to peaceful protests by escalating repression and killing that, in turn, created the environment for the current strife.

In the past few months, as the situation in Iraq has deteriorated, the Bush Administration, in both its public diplomacy and its covert operations, has significantly shifted its Middle East strategy. The “redirection,” as some inside the White House have called the new strategy, has brought the United States closer to an open confrontation with Iran and, in parts of the region, propelled it into a widening sectarian conflict between Shiite and Sunni Muslims.

To undermine Iran, which is predominantly Shiite, the Bush Administration has decided, in effect, to reconfigure its priorities in the Middle East. In Lebanon, the Administration has coöperated with Saudi Arabia’s government, which is Sunni, in clandestine operations that are intended to weaken Hezbollah, the Shiite organization that is backed by Iran.

The U.S. has also taken part in clandestine operations aimed at Iran and its ally Syria. A by-product of these activities has been the bolstering of Sunni extremist groups that espouse a militant vision of Islam and are hostile to America and sympathetic to Al Qaeda.

All in the name of democracy, freedom, justice, and human rights, to be sure. But I'm just not sure how the deployment of a chemical weapon serves human progress, unless one subscribes to the idea that sometimes you have to destroy a village to save it.

The mystery surrounding the perpetrators of the 2013 chemical attack in Damascus remains unsolved, despite the best efforts of veteran intelligence professionals like Yossef Bodansky and investigative journalists like Seymour Hersh. But the last word goes to Richard Lloyd and Ted Postol, the MIT people who did a forensic analysis of the shells that delivered the chemical. In the comment section in response to a reader who dismissed Hersh's April 4, 2014 report, The Red Line and the Rat Line, which pointed the finger at Turkey's government, they wrote in part:

We do not claim to know who was actually behind the attack of 21 August [2013] in Damascus. But we can say for sure that neither do the people who claim to have clear evidence that it was the Syrian government. The mainstream American media have done a disservice to the public by allowing politically motivated individuals, governments, and non-government organisations to misrepresent facts that clearly point to serious breaches of the truth by the White House.

The chemical attack, and the unintended consequences of covert actions prosecuted by the American government in league with Al-Saud, form a gruesome allegory. It warns that the model of intervention developed to promote democracy -- or any doctrine -- can be used by any government or well-funded faction for its own purposes and palmed off as a blow for justice.

The chemical attack is not the only mystery stemming from attempts to remove Bashar al-Assad from office.

On February 25, 2011, the March issue of Vogue magazine was published.  It contained a first-of-its-kind profile of Assad's wife, Asma, and a look at the Assads' personal life.  On the heels of this, the "Arab Spring" came calling in Syria; within a month of the Vogue issue going on sale, the country was plunging into revolution.

The profile was authored by Joan Juliet Buck at the insistence of Anna Wintour, Vogue's Editor-in-Chief. Buck, who'd been writing for Vogue for 40 years, had no interest in Syria and hadn't want to write the article. But her boss wanted a great puff piece on the Syrian president's chic and pretty British-Syrian wife, and Buck delivered because Anna Wintour always got what she wanted.

Later, after the news broke that Assad was a mass murderer, Vogue and Buck repudiated the article and Vogue set about burying the offensive March issue, without complete success.

But a close reading of the puff piece, coupled with a fairly good knowledge of the House of Saud's views on Islam and knowledge that the Obama Administration was making a pitch at that time for Assad -- and the Iranian leadership -- leads to a chilling question.  (The Administration had reopened the American embassy in Damascus and sent an ambassador there in late 2010.)

Bashar and Asma al-Assad aren't exactly westernized Muslims in the manner of say, Jordan's King Abdullah II and his wife.  They are Westerners.  That's how the Assads see themselves and that's actually what they are.

The Syrian region is one the oldest seats of Western Civilization. So while Asma is a 'secular' Sunni Muslim and Bashar is an Alawite -- a sect of Shiite Islam -- they represent a strain of thought that places Islam in the context of religions and cultures that created Western Civilization.

The Western strain of thought can be tolerated to some extent by the guardians of Islam in the Middle East, but I wouldn't have wanted to be in the room when the Saudi king at that time, Abdullah bin Abdulaziz Al Saud, was handed the copy of Vogue.

While he certainly knew the Assads were Western, I think he would have read the Vogue article in the way I did. If the Obama Administration was seeking rapprochement with Syria's government, this would be putting the Assads and their views in a highly visible position on the world stage. And the Muslim stage.
From that viewpoint there was no way such a couple could be allowed to stay on as heads of state in a Muslim country. The chilling question is how far the House of Saud was willing to go to remove them. 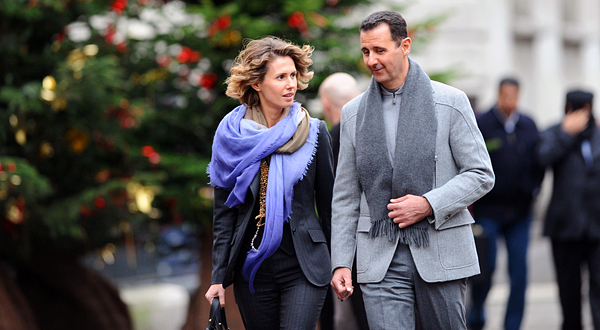 As to Armageddon, according to Graeme Wood's infamous March 2015 article for The Atlantic, What ISIS really wants:

The Islamic State awaits the army of "Rome," whose defeat at Dabiq, Syria [in an Armageddon-like battle], will initiate the countdown to the apocalypse.

Well, nobody ever said God doesn't have a sense of humor.

She is nicknamed Nuclear Wintour