Just in time for Blood Moon: Iran as much accuses Saudis of murdering Hajj pilgrims

September 24, day before the stampede: Hajj attendees walk across bridge for the ritual of symbolically stoning the Devil. 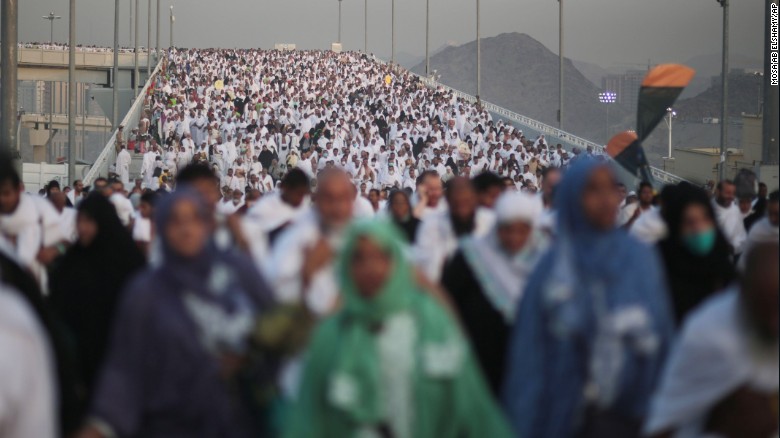 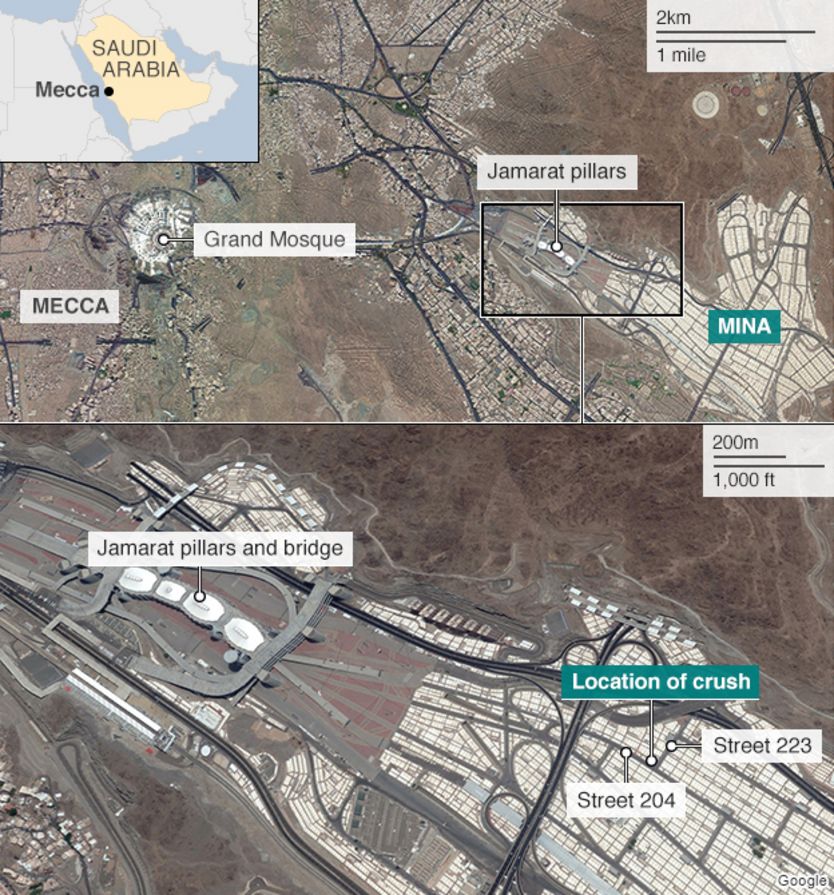 
Iranian President Hassan Rouhani used a major United Nations speech on Saturday to demand an investigation into a crush that killed more than 700 people at the annual haj pilgrimage in Saudi Arabia.

The fact that Rouhani used a U.N. summit meeting on global development goals to reiterate Iran's outrage over the haj tragedy was a sign that Tehran does not intend to tone down criticism of its regional rival Saudi Arabia. Both Iran and the Saudis see themselves as leaders in the Muslim world.

In his speech to the 193-nation U.N. General Assembly, Rouhani emphasized the need for an investigation into "the causes of this incident and other similar incidents in this year's haj."

The Iranians were just getting warmed up. "We will urge international courts and circles to start the trial of the Saudis for their crimes against hajj pilgrims," said Iran's Prosecutor General Ebrahim Rais, and, "Under international law, this incident is absolutely subject to prosecution."
As to whether there's anything to the accusation,  there are very different versions about how the tragedy happened.

From a September 26 Associated Press report, large crowds of pilgrims were funneled at the same time by two narrow roads that converged (at right angles), making a chokepoint in Mina, a tent city on the outskirts of Mecca and site for the trek to the stone-throwing part of the Hajj ritual at the Jamarat pillars.

The Iranian government claimed yesterday that the crush happened because --


... Saudi authorities blocked a road used by hajj pilgrims to allow a royal convoy to pass through, causing the deadly convergence in the town of Mina
[...]
Saudi Interior Ministry spokesman Maj. Gen. Mansour al-Turki told The Associated Press that a VIP convoy traveling through Mina on Thursday, which included foreign dignitaries, had nothing to do with the incident and was in a different part of town. He said VIPs use their own roads in Mina.

And there's the bombshell version

Asharq Al-Awsat—The Hajj tragedy that has left hundreds of people dead and injured was caused by a group of Iranian pilgrims who failed to follow instructions from Hajj authorities, an official from Iran’s Hajj mission has revealed.

At least 717 pilgrims were killed and 863 injured on Thursday when two large groups of people collided at a crossroads in Mina, east of the Muslim holy city of Mecca, the Saudi interior ministry said.

The official, who requested anonymity to discuss the issue, said the accident occurred after a group of around 300 Iranian pilgrims failed to follow orders requiring them to wait for clearance to leave Jamarat—the site where pilgrims perform the “stoning the devil” ritual.

Instead, the group went back to their mission’s headquarters as other groups were on their way to the site as scheduled, according to the official.

"The group stopped for a while, causing the coming pilgrims to take a route no more than 20 meters wide,” he said, adding that such behavior often leads to tragic consequences in crowded areas.

The Iranian pilgrims were scheduled to leave Jamarat hours after the accident took place, the official said.

Meanwhile, a Saudi security source said authorities may check security cameras installed in the tunnel leading to Jamarat to verify when the Iranian group left the site.

The majority of eyewitnesses who spoke to Asharq Al-Awsat agreed that the crush occurred after pilgrims “failed to follow orders from security.”

Yahia Hamida, a 26-year-old pilgrim from Jordan, told Asharq Al-Awsat that “an unusual mass of pilgrims congregated on Street 204 [that leads to Jamarat] after some entered the wrong lane.”

“Movement on Street 204 was normal until a large number of pilgrims came in the opposite direction, which stopped movement for about an hour and a half before the elderly began to collapse,” another pilgrim said.

Saudi interior ministry has said investigations into the causes of the tragic stampede were underway and that “high temperature and tiredness” contributed to the accident.

Was President Rouhani's very public accusation in response to the Asharq Al-Awsat report?  No time stamp on the report, but given that the website is published out of London, which is five hours ahead of New York time, and that it doesn't cite the new death and injury tolls, which seem to have been updated at some point yesterday, I think it's fairly certain that the report was published hours before Rouhani addressed the U.N. And if not from the report, Rouhani would have been aware of the Iran Hajj Mission official's remarks about the incident before he spoke at the U.N.

Iranians are the largest group of casualties identified so far, according to the AP report. The death toll now stands at 769. According to another Reuters report, the Saudi Health Minister explained at a press conference that the higher death toll reflects those who succumbed to their injuries after they survived the stampede:


"Those are the ones who died in various hospitals since the event," he said, adding that 934 people were wounded.

Shi'ite Muslim Iran, which is locked in a series of proxy wars in Arab countries around the Sunni Muslim kingdom, says that at least 136 Iranians are among the dead, sparking protests and outrage in the Islamic Republic on Friday. [at least 140, from the BBC report's tally of deaths by nationalities.]

"We will urge international courts and circles to start the trial of the Saudis for their crimes against haj pilgrims," Iran's Prosecutor General Ebrahim Raisi was quoted as saying by student news agency ISNA on Saturday

"This is not incompetence, it's a crime," Raisi told state broadcaster IRIB.

At the U. N. General Assembly, Iranian President Hassan Rouhani used his address to the summit to demand an investigation into the crush.

Protecting the visitors to mosques at the holy cities of Mecca and Medina is a key pillar of legitimacy for the Saudi royal family, and the king has the title of "custodian of the two holy mosques."

"You are not responsible for what happened. You dealt with the beneficial factors that were in your hands and within your ability. As for the things that humans cannot control, you cannot blamed for them. Fate and destiny are inevitable," Al al-Sheikh, known as the Grand Mufti, said in a televised statement.

Al al-Sheikh also appeared to deflect criticisms of the kingdom from outside as a product of "envy."

"Many are envious of the kingdom for its religion, leadership, economy and the cohesion of its members, and for the great blessings it has experienced, unlike many other countries," he said.

Boy, is it ever stupid to say in front of a microphone that God loves us more than the other guys.

As to the cleric's other gem of wisdom, law firms have made fortunes from claims of fate and destiny. The Iranians might not be able to get the Saudi government in the criminal courts, but we'll see what attorneys specializing in mass torts can do with a few facts.

The BBC reports that after Rouhani's speech at the United Nations, Iran's Supreme Leader, Ayatollah Ali Khamenei, called on the Saudi government to apologize for the deaths, adding:


"The Islamic world has a lot of questions. The death of more than 1,000 people is not a small issue," he said, citing claims by Iranian officials of a higher death toll [than the official one].

"I believe that the Iranians should know better than to play politics with a tragedy that has befallen people who were performing their most sacred religious duty."

As to the Iranian government's claim that 300 Iranians are still missing, that's an eyebrow raiser.  It so happens it's the same number of Iranian pilgrims cited in the Asharq Al-Awsat report as causing the human gridlock on Street 204.

In any society a mass tragedy can bring forth angry accusations and counter-accusations. Yet an irony is that the Saudi government has taken extraordinary measures to prevent killer stampedes that in earlier years plagued the Hajj, and in particular the stone-throwing ritual. And they've never stopped trying to resolve crowding issues at the Hajj -- part of the reason for their massive construction projects in Mecca, which ironically figured in the crane collapse at the Grand Mosque.

This said, for several years there has been mounting criticism from Muslims about how the Saudis manage the Hajj and their construction projects in and around Mecca, which have leveled hills, displaced thousands of expat workers, obliterated historical sites of importance to Muslims, and generally transformed the sacred city of Mecca into a glitzy tourist spot.

Yet the critics should realize this is a worldwide trend, which I mocked in a recent writing about construction fever in China: once you put 'em through college and they emerge with engineering degrees, then you have to employ them. When the graduates number in the many hundreds of millions, we can see how no piece of open space is safe from building developers.

By the way, this is just why we need to colonize Mars. Send them there to build, before they put up office towers in the Grand Canyon.

Yet criticism and accusations obscure that the tragedy in Mina is an incredibly pointed metaphor about the state of the Islamic religion -- and that it applies no matter which version of how the stampede happened is correct. Two massive crowds colliding then suffocating and trampling each other to death.

So the greatest irony about the tragedy is that the Sunni and Shiite leaders squabbling with each other about its cause were oblivious to the big picture it showed.

Now about that Blood Moon. End-Timers are having a field day speculating about a somewhat rare lunar event -- a red-tinged harvest moon that is also a supermoon going into total eclipse.

There's been so much consternation in some quarters the Mormon Church had to issue a proclamation that the event isn't a sign of the Apocalypse so will everyone please calm down.  But the fact that it's happening at the start of Sukkot, a Jewish thanksgiving holiday, and that it's part of a tetrad that has fallen on other Jewish holy days, has helped fuel fears that the celestial event tonight portends the start of Apocalypse.

The doomsayers tend to ignore that many if not most sacred holidays were set up to happen on full moons, so of course there are bound to be eclipses, blood moons, etc., on those occasions.

But for those who must impart meaning to celestial events, one need look no further than the fact that in the weeks running up to the eclipse of a blood supermoon, unprecedented numbers of Muslims fled to Christendom, and two disasters befell pilgrims to Mecca.

Short of coshing each of them on the head I don't know what else the Divine can do to send a clearer message to the Mohammedans. God isn't asking you to submit, you fools. He's asking you to change -- or perish.