Melissa (picture below) needs no introduction to readers of this blog. I'm happy to announce that she'll be a guest on John's radio show on Saturday, July 25 at 10:20 PM Eastern Time. 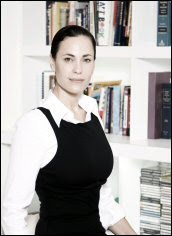 The Saturday show broadcasts from New York City's megawatt 77 WABC-AM, which can be picked up across a wide region in the Eastern USA (and even in parts of Canada), and which can be heard online nationally and globally.

A podcast of the interview will be available the next day at the show's website.

Although John's website hasn't announced this yet, 630 WMAL-AM out of Washington, DC, which airs a portion of John's Sunday show, has picked up the last three hours of the new four-hour Saturday Batchelor show.

The WMAL Saturday broadcast starts at 10:00 PM Eastern Time, so Melissa's interview will be included.

WMAL can be heard online, although I'm not sure of the internet range outside the Greater Washington, DC area, which includes parts of Virginia and Maryland.

To the best of my knowledge the Saturday show has not been picked up by the California stations broadcasting the Sunday show although I hope that will change. See John's website for more information on the show and for the Saturday and Sunday schedules, which are generally available by Saturday.

For those who are new to the swine flu party or don't know about Melissa and the BioMask™:

Melissa Mowbray-d'Arbela, an Australian based in Hong Kong, is the CEO and co-founder of Filligent, Ltd. From her interview in POWER magazine and her biographical sketch at Filligent she seems quite an extraordinary person -- a cross between an entrepreneur, humanitarian and innovator. 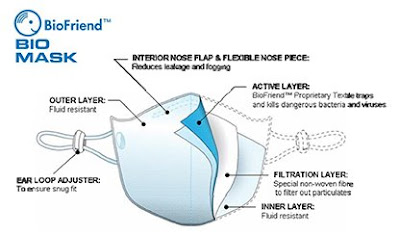 And here is what it looks like being worn: 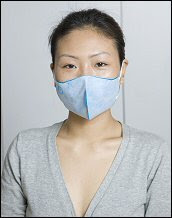 "According to pandemic experts an effective face mask like the germ-killing BioMask could reduce the number of cases from one million to just six in the first months of a pandemic."

It's made from a material that represents a biotechnology advance.

The mask is lightweight, comfortable, highly 'breathable,' perfectly fitting, moisture and mold resistant, inexpensive, safe for humans, non-irritating to skin, and as attractive as a face mask can be. And, most importantly, it's an assassin:

Typical face masks (including standard surgical masks and N95s) do not kill airborne pathogens. They are based on a passive mechanical filtration design only. Thus, microbes on or inside the mask can stay alive for many hours, greatly increasing the likelihood of cross-contamination.

The BioMask™ traps and kills bacteria and viruses within seconds of their landing on the outer layer of the mask's surface. That solves the problem for people, especially children, who fiddle with their face masks all the time they're wearing them, thereby transferring germs to their hands.

It's that kind of problem that's caused health experts to view surgical masks, even the N95 respirator-type ones, as little use in an epidemic.

Another problem is that regular surgical masks are ill-fitting; they tend to gap at the sides, which means they don't contain sprays from sneezing and coughing. The BioMask™ is designed to be a good fit.

As part of the CE testing process, the BioMask™ was sprayed with live aerosolized Influenza A virus equivalent to 50 times the amount contained in a normal sneeze. (The Mexican swine flu is a strain of the Influenza A virus.) More than 99.9% of the viruses were killed after less than one minute. Similar tests were conducted on other key pathogens, with similar results.

When the BioMask™ was tested in terms of all the major routes of exposure, oral and dermal, it showed no harmful effects on humans. The BioMask™ has been tested for dermal biocompatibility following internationally recognized standards set out in ISO10933: Biological Evaluation of Medical Devices. Tests were conducted to evaluate cytotoxicity to cells, skin irritation on contact, and skin sensitization after repeated contact. No cytotoxicity, irritation or incidence of sensitization was observed.

You can read more about the BioMask™ and the technology behind it at Science 2.0 or the Filligent website. (Filligent is a portmanteau of "filter" and "intelligence.")

For those who're wondering -- yes, the BioMask™ germ-killing techonology, named BioFriend™, has other applications, which include an amazing 'dry' hand-washing cloth and a patch.

See the Filligent website for more data on the BioMask™, the implications of which are mind-boggling. If the mask was widely used at the start of an outbreak of an airborne infectious disease for which no vaccine is available, it would greatly slow the rate of infection. In combination with other NPIs ("non-pharmacological interventions"), it would ward off a pandemic even before a vaccine was ready for use.

Then why, given the mask's availability since April, is Hong Kong the only place that the mask is selling retail? (It went on sale July 7 at Asia's leading drugstore chain, Watsons.)

I don't know; there's no obstacle from the Filligent end that I can see. According to their literature, the mask is "flat-packed and can be surge manufactured. We are working with retailers and humanitarian organizations to get the BioMask™ and our other anti-infective products out to people as soon as possible."

I do know there hasn't been much publicity about the mask in the USA. To my knowledge no media outlet, beyond a few blogs and scientific and medical web sites, has reported on it.

RBO blog's Swine Flu Reader has links to all my posts on swine flu since April, and which have been crossposted there with illustrations provided by RBO.
Posted by Pundita at 7/24/2009 06:15:00 PM