UPDATE
The puppy has been renamed "Buffy." See this December 14 post for Pundita's anguished reaction to the choice of name and for all the latest Buffy Briefings.
**********


After planting a kiss on his nose, a futile attempt to show the sheepdog who's boss 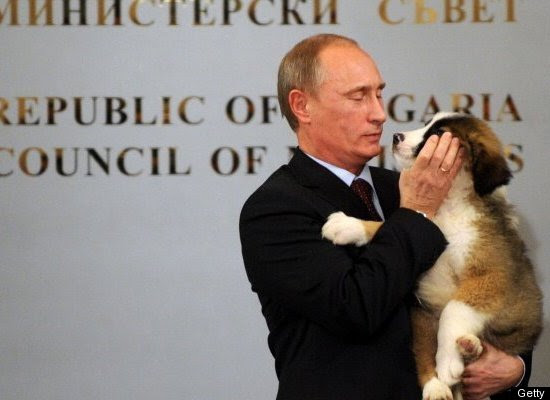 I think you have given me a superstar 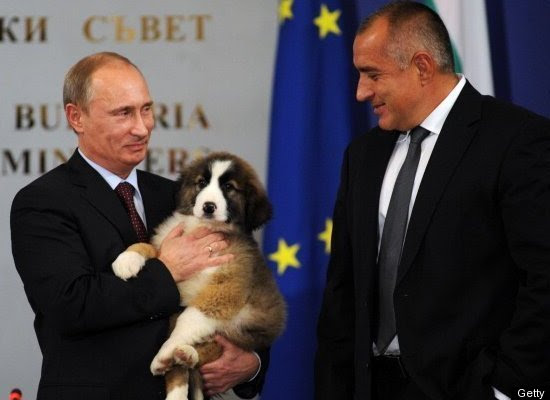 The sheepdog will be running his life within a month

He's also going to make a wonderful companion for Putin's aging Labrador, Koni (or "Connie," as some news reports identify her), who's 11 years old.

Paw Nation wondered if the gift, from Bulgaria's Prime Minister Boyko Borissov (a dog lover), was a complete surprise to Putin (another dog lover). I don't think so, because the Bulgarian press couldn't resist spilling the beans ahead of Putin's visit, which was to discuss energy matters and sign an agreement for a joint company that will construct the South Stream pipeline.

However, The Paw Nation blogger watched the video of Borissov presenting the sheepdog to Putin and recounted in amusement that there was a look of "kind of panicked surprise" in Putin's eyes at first. It could be that he was surprised by the size of the puppy, which is bigger than many full-grown dogs. According to the Karakachan Dog Association of America website, a full-grown Karakachan can weigh 130 pounds.

Paw Nation has the video.

Huffington Post chimed in with a photo gallery of the newest addition to the Putin family and mentioned a droll story that Reuters mined from President George W. Bush's just-released memoir, Decision Points:


... Bush says he had introduced then-Russian President Putin to his Scottish terrier, Barney, on a visit to the U.S. presidential retreat, Camp David.

Putin returned the favor when Bush visited Russia and Putin was giving him a tour of the grounds of his dacha.

"A big black Labrador came charging across the lawn. With a twinkle in his eye, Vladimir said, 'Bigger, stronger, faster than Barney,'" Bush writes. ...

Bush says he later told the story to the Canadian prime minister, Stephen Harper, who replied: "You're lucky he only showed you his dog."

Ahhh, she will love him unconditionally which I don't believe any woman could do.