President Obama's visit to India, Day 1: Starting off on the good foot

Initially I questioned the size of the retinue (reportedly 3,000 in number) accompanying President Obama's three-day visit to India and the price tag (reportedly $200 million per day) but given his fondness for symbolism that is one way he's signaling the great importance of India to the United States. He has certainly beat out all other world leaders, and presidents Bill Clinton and George Bush, in the scope of his preparations for the visit, which will be the longest he has spent in any country since becoming President.

Another important symbolic act was his decision to begin his visit in Mumbai, the site of the 2008 terrorist attack that was India's "9/11," and to stay at the historic Taj Mahal Palace and Tower hotel, which was one of the sites of the attack, and which is next door to India's landmark, the Gateway to India. The Taj suffered fire damage during the attack but it's been fully restored.

His first official act on arriving in India was also laden with symbolism:

He spoke with a group of hotel employees and other survivors gathered in a hotel courtyard shortly after checking into the hotel. He is the first foreign head of state to stay at the Taj since the attacks ... known as 26/11. ...

One of those who met with Obama today was Karambir Singh Kang, the hotel manager. He lost his wife, Niti, and their two sons in the attacks, but then went on to help save others.

First Lady Michelle placed a white rose at a memorial wall at the hotel to the 26/11 victims and President Obama signed the hotel guest book with these words (photograph AFP/Getty Images): 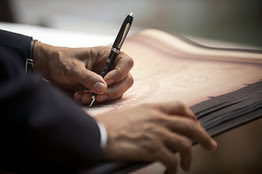 "We will always remember the events of 26/11; not only the sorrow, but also the courage and humanity that was displayed that day. The United States stands in solidarity with all of Mumbai and all of India in working to eradicate the scourge of terrorism, and we affirm our lasting friendship with the Indian people.”


He also told the 50 or so people gathered -- family members of those killed, survivors and hotel employees present at the Nov. 26 attacks -- what "an extraordinary honor it is to be here in India."

Then, with First Lady Michelle at his side, the President gave his first speech in India (see Reuters photo above). He spoke at 2:25 PM, less than 90 minutes after his arrival in India, on the rooftop terrace of the Taj with the tower of the Gateway of India as backdrop.

Below is the transcript of the entire speech, from the Hindustan Times, courtesy of reader Priyank Pandey. Priyank has kindly agreed to be a Special Correspondent to Pundita blog during Obama's stay in India. There's already been a tremendous amount of commentary about Obama's visit, which is getting in the way of what's actually happening. Note to U.S. news media: Let's try something new for a change: first observe a presidential visit before leaping to 1,000 different conclusions as what it means. Toward that end I've asked Priyank to cull reports from the Indian press on Obama's visit.

To those who were miffed that Obama's speech at the Taj didn't name the terrorist organization responsible for the 26/11 attacks -- that would have given the terrorists a recognition they didn't deserve during a historic speech and visit. It was enough that he correctly referred to the attackers as "terrorists," which I hope didn't offend the BBC too much:

On behalf of Michelle and myself, I want to say what an extraordinary honor it is to be here in India. I want to thank the people of Mumbai and all of you here today for your extraordinarily warm welcome. And I want to say to the people of India how much we are looking forward to spending the next three days in this remarkable country and to deepening the partnership between our two countries.

I know there’s been a great deal of commentary on our decision to begin our visit here in this dynamic city, at this historic hotel. And to those who have asked whether this is intended to send a message, my answer is simply, absolutely. Mumbai is a symbol of the incredible energy and optimism that defines India in the 21st century. And ever since those horrific days two years ago, the Taj has been the symbol of the strength and the resilience of the Indian people.

So, yes, we visit here to send a very clear message that in our determination to give our people a future of security and prosperity, the United States and India stand united.

A few moments ago, Michelle and I had the opportunity to visit the memorial here and to honor the memory of those who were lost. And we also had the privilege of meeting with some of their families, as well as some of the courageous survivors. I thank them all for joining us here today, along with so many others who endured the anguish of those four days in November.

But the resolve and the resilience of the Indian people during those attacks stood in stark contrast to the savagery of the terrorists. The murderers came to kill innocent civilians that day. But those of you here risked everything to save human live.

You were strangers who helped strangers; hostages who worked together to break free and escape; hotel staff who stayed behind to escort guests to safety; including the hotel manager, even after he lost his own family; a nanny who braved the bullets to protect a young boy; and Indians in uniform who stopped the carnage and whose colleagues made the ultimate sacrifice.

The perpetrators wanted to pit believers of different faiths against one another. But they failed. Because here in Mumbai, the diversity that is India’s strength was on full display: Hindus, Sikhs, Christians, Jews and Muslims protecting each other, saving each other, living the common truth of all the world’s great religions, that we are all children of God.

Those who attacked Mumbai wanted to demoralize this city and this country. But they failed. Because the very next day, Mumbaikars [residents of Mumbai] came back to work. Hotel staff reported for their shifts. Workers returned to their businesses. And within weeks, this hotel was once again welcoming guests from around the world.

By striking the places where our countries and people come together, those who perpetrated these horrific attacks hoped to drive us apart. But just as Indian citizens lost their lives on 9/11, American citizens lost their lives here on 26/11 -- along with the citizens of many nations. And just as our people prayed together at candlelight vigils, our governments have worked closer than ever, sharing intelligence, preventing more attacks, and demanding that the perpetrators be brought to justice.

Indeed, today, the United States and India are working together more closely than ever to keep our people safe. And I look forward to deepening our counterterrorism cooperation even further when I meet with Prime Minister Singh in New Delhi.

We go forward with confidence, knowing that history is on our side. Because those who target the innocent, they offer nothing but death and destruction. What we seek to build -- to welcome people of different faiths and backgrounds, and to offer our citizens a future of dignity and opportunity. That is the spirit of the gateway behind us, which in its architecture reflects all the beauty and strength of different faiths and traditions, and which has welcomed people to this city for a century.

That is the hope that in towns and villages across India, across this vast nation, leads people to board crowded trains and set out to forge their futures in this city of dreams. And that is the shared determination of India and the United States -- two partners that will never waver in our defense of our people or the democratic values that we share.

For just as your first Prime Minister said the day that the father of your nation was taken from you, we shall never allow that torch of freedom to be blown out, however high the wind or stormy the tempest. We believe that in America, and we know you believe it here in India.

God bless you, and thank you very much.