Will Aung San Suu Kyi be released within the next 48 hours? We'll soon find out, won't we? 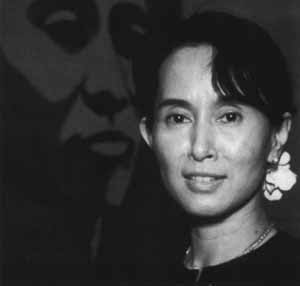 It is an affront to language to call the junta's rubber-stamping of the Union Solidarity and Development "Party" an "election." But now that the sham has played out --

... Suu Kyi, who has been detained for 15 of the past 21 years, is scheduled to be released on Nov. 13, according to the terms of her most recent house arrest. The junta hasn’t said publicly whether it will free the 65-year-old Nobel Peace Prize laureate.

“We are very confident she will be released,” Win Tin, a senior member of Suu Kyi’s National League for Democracy, said by phone from Yangon. “She is a convicted person. If she was detained the detention could be extended, but a convicted person has to be released once their sentence ends.”

Suu Kyi’s release and the conditions surrounding it may trigger a review of U.S. and European sanctions against the regime for human rights abuses, including the jailing of 2,100 political prisoners. She plans to tour the country and consider her view on sanctions if freed, Win Tin said.

Suu Kyi won’t accept conditions attached to her release, and plans to help investigate charges of fraud during the Nov. 7 election, which was criticized for excluding the democracy activist and other political prisoners, Win Tin said. The poll was Myanmar’s first since Suu Kyi’s party won a landslide victory two decades ago in a result nullified by the junta.

The Union Solidarity and Development Party, formed by Prime Minister Thein Sein, won the most seats in the election, according to reports in state-run Myanmar newspapers. Suu Kyi, whose party boycotted the election, will visit supporters around the country if released, Win Tin said yesterday. 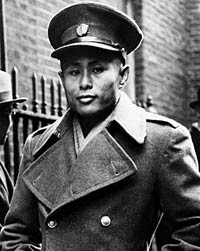 “She’s the daughter of our national hero,” he said. “She won’t quit politics, no matter what the military junta offers.”

Suu Kyi is the daughter of General Aung San, who led the fight for independence from Britain in the 1940s. She was two years old when her father was assassinated, and spent much of her life outside Myanmar, formerly known as Burma. She married Michael Aris, a scholar of Tibet, and had two children while living in the U.K.

Her life changed in 1988 when she returned to Myanmar to nurse her ailing mother and led the struggle for democracy.

Myanmar came under military rule in 1962 when General Ne Win overthrew the government of U Nu, the man who succeeded Suu Kyi’s father and presided over 10 years of democracy after the country achieved independence in 1948. Political parties were outlawed in 1964 and the military created a socialist state approved in a 1973 referendum.

Suu Kyi and U Tin Oo formed the National League for Democracy and began campaigning at rallies, defying martial-law restrictions. In July 1989, they were placed under house arrest for “endangering the state.”

In 1990, the junta agreed to hold multiparty elections, at the same time starting a crackdown on opposition leaders. Suu Kyi was banned from standing in the elections after the junta designated her as a foreigner, citing her marriage to Aris.

Suu Kyi’s party emerged with almost 60 percent of the votes, and made an immediate demand that the junta begin negotiations on a new assembly. The military insisted the elections were to choose a government that would operate under its direction and refused to recognize the result.

The U.S. led the international response, imposing economic sanctions on the teak- and rubber-exporting nation of 53 million people. The sanctions, still enforced, have been undermined by Chinese, Indian and Thai investments in ports, railways and oil and gas pipelines that give them access to the country’s natural resources and trade routes in the Indian Ocean.

The Association of Southeast Asian Nations called the vote “a significant step” in Myanmar’s path to democracy, according to a statement from Vietnam, which holds the rotating chairmanship. China welcomed the smooth election, Xinhua reported, citing Foreign Ministry spokesman Hong Lei.

“It’s important not to be deluded into overly praising the regime for less than half measures,” Ron Hoffmann, Canada’s ambassador to Myanmar, said on Nov. 7. “We need the regime to take reform and human rights more seriously, and that means more than releasing one individual.”