UPDATE
The NYT report I feature below says that Janet Nova's actions "may have gone unnoticed in the scuffle and in the media hype that ensued ..."

What media hype? At first the news media ignored the incident because the press wanted to focus on Rupert Murdoch's answers in the hearing. They wanted to see him get a beating in Parliament. But when Wendi leaped up to defend her husband, an act shown round the world on TV, the incident immediately went viral because of Twitter comments. It was the people outside the media establishment who pushed the story into the mainstream, until Google News finally caved in and ran the story at the top of its news page late this afternoon.

By the way Wendi is already a cultural hero among women in China because of her act. It's a runaway story, and now we learn it gets even better. 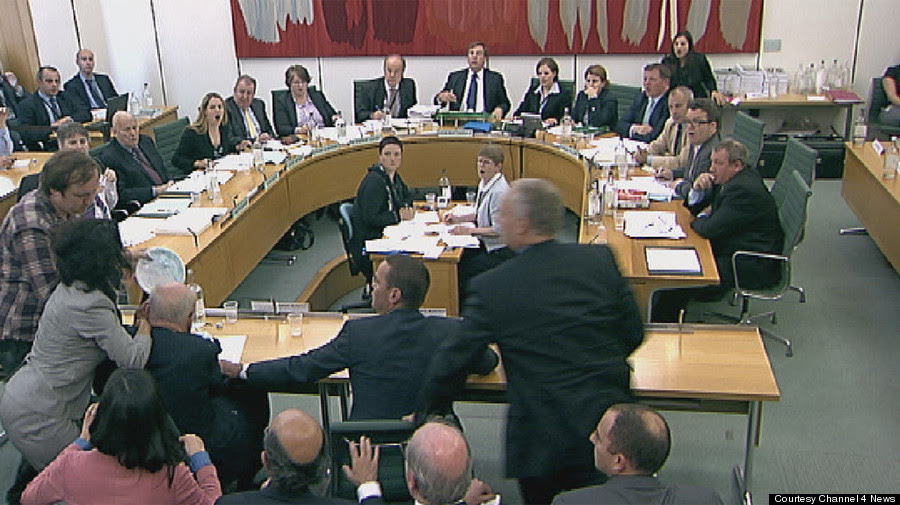 The first photo I saw of the incident was a very small version of the one above, so I was confused when I learned that Wendi had been wearing pink because a woman in gray seemed to be fending off the attacker. Today the New York Times sorted out the mystery:

LONDON — The heroics of Wendi Deng Murdoch drew gasps of awe when she lunged out of her seat in a committee room Tuesday to protect her husband, Rupert Murdoch, from a protester [make that a "would-be assailant"] wielding a shaving cream pie.

But there was another woman who actually intervened before Mrs. Murdoch did: Janet Nova, the News Corporation’s interim group general counsel.

It may have gone unnoticed in the scuffle and in the media hype that ensued, but Ms. Nova was the first to react to the [would-be assailant's] approach. She leapt to her feet and, clutching her iPad, tried to block the man’s reach toward her boss. Mrs. Murdoch followed right behind her, and appeared to reach over Ms. Nova as she swung her arm in a great arc to deliver a sharp punch.

Ms. Nova, who is 46 and is based in New York, is a graduate of Princeton University and Columbia Law School who has been with the company since 1997. She was one of the troupe of company lawyers and public relationship advisors who prepared Mr. Murdoch for his appearance on Tuesday before a parliamentary committee looking into phone hacking by the company’s British newspapers.

Through more than two hours of questioning Ms. Nova, wearing a gray suit, sat patiently a few feet behind and to the left of Mr. Murdoch. When the [would-be assailant] — identified in British news reports as Jonathan May-Bowles, a comedian who performs under the name Johnnie Marbles — stormed toward the witness table from that side, Ms. Nova provided the first line of defense and Mrs. Murdoch the second, while James Murdoch, Rupert’s 38-year-old son, seemed frozen in surprise in his seat to his father’s right.
[...]
Ms. Nova has been in her post for only a month. Rupert Murdoch wrote in a company e-mail announcing her promotion on June 20 that she “has handled a number of major acquisitions for the company over the past several years, in addition to managing our corporate reporting and governance matters.”

This is an incredible story from the viewpoint of signs and symbols: Two women leaping action while men nearby were still trying to process what was happening. The incident occurring in the British Parliament. And one woman an American and the other Chinese. (Well, I don't know whether Wendi became a naturalized U.S. citizen but she was born and raised in China.) Is this a sign that the U.S. and China are better off cooperating?

Then there is the detail of Janet Nova using her iPad as a defensive weapon. Now THAT would be a great selling point for an ad campaign: No mace on hand when you're attacked? Wield your iPad!

And of course there is the symbolism-laden detail that both women are in their 40s and foiled a man in his 20s. Brave young man, launching a sneak attack on a man in his 80s. He doesn't look so brave here, after Wendi and Janet got finished with him, does he? Talk about getting one's just desserts.