UPDATE July 20, 8:50 PM EDT
It turns out that there were actually two woman -- an American attorney named Janet Nova is the other -- who foiled the pie attack on Rupert Murdoch. Here is the link to the New York Times report today about Janet's role in the incident. I would like to make what I think is one correction to the report, which says that Janet Nova's actions "may have gone unnoticed in the scuffle and in the media hype that ensued" about Wendi Deng's heroics.

What media hype? At first the news media ignored the incident because the press wanted to focus on Rupert Murdoch's answers in the hearing. They wanted to see him get a beating in Parliament. But when Wendi leaped up to defend her husband, an act shown round the world on TV, the incident immediately went viral because of Twitter comments. It was the people outside the media establishment who pushed the story into the mainstream, until Google News finally caved in and ran the story at the top of its news page late this afternoon.

The would-be assailant after Wendi was finished with him

To those who'd say I'm being unfair to the United Nations -- I'm being harsh to make a point. Despite the best of intentions the United Nations approach to women's liberation -- the same approach promoted by the World Bank, the European Commission and a host of 'liberal' democratic governments around the world -- has only served to entrench gender equality by channeling women's outrage at being treated as subhuman into a set piece involving education about human rights, legal edicts and protest marches.

In one magnificent act today Wendi Deng Murdoch exposed what's wrong with the approach and showed that laws and education programs are no substitute for women -- and women who are mothers of female children -- individually demonstrating a healthy sense of moral outrage and personal courage.

That Wendi's act took place in the British Parliament is also highly symbolic. Recently British Prime Minister David Cameron listed what he called "British values." Missing from the list was British common law, which is the backbone of legal systems, including the one in the United States, that historically were in the forefront of making gender equality into law.

Mr Cameron substituted "the rule of law" for British common law so that his list of "British values" was nothing more than a description of European Union values. Cameron did this at a time when the British government continues to look the other way as tribal practices imported by immigrants from regions of the world that treat women worse than dirt have trammeled the British system of law.

That a woman of Chinese heritage, who knows first-hand of the struggle in China for gender equality, swung into action before British lawmakers should, one hopes, be a lesson in courage for the lawmakers to ponder.

Wendi (in pink jacket) before the attempted attack

Wendi in action against her husband's would-be assailant 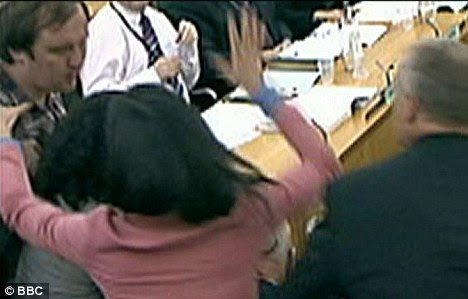 At the start of what even the News Corp-unfriendly MSNBC TV termed an "inquisition," News Corp CEO Rupert Murdoch told the assembled Members of Parliament, "This is the most humble day of my life." His day ended, one should think, as one of the proudest of his life as his wife Wendi made history while going to battle on his behalf. The Guardian describes the incident with relish:

The Murdoch father and son were nearing the end of more than two hours of questioning when there was a sudden commotion. A woman's voice could be heard shouting, "No, no, no!" as the shaving-cream assailant, Jonathan May-Bowles, walked up to Rupert Murdoch, took aim and struck.

Deng lunged while startled police officers were barely off the back foot. While a roomful of male advisers also appeared stunned, she scooped up the paper plate fired at her husband and launched it like a grenade back at May-Bowles, a comedian, with an amazing right hook.

Such was the force of her shot that the foam directed at her husband's face landed on a police officer and on her own blue-painted toes.

Witnesses believed that if it wasn't for that officer she would have continued round the table to finish the man off.[...]

That man, at least from the BBC photo above, is heftier and a head taller than Deng. At 26 he is 16 years her junior. MSBC added these delightful details:

The protester [um, more properly described as the would-be assailant], covered in white foam, was hauled away and the session was suspended.

The chairman of the parliamentary committee even commented on her defense skill: "Mr. Murdoch, your wife has a very good left hook" [...]

The chairman, noted another news report, had been one of Rupert's toughest questioners during the grilling session.

The Guardian report also mentioned that Wendi slapped the assailant before giving him a taste of his own shaving cream.

A Reuters report examines how Wendi's bravery, toughness and lightning reflexes could impact News Corp's fortunes in the future and closes with this mention:

Wendi is also credited as producer of the just-released movie "Snow Flower and the Secret Fan," a story set in 19th century China about the tough cultural norms imposed on women [based on the New York Times 2005 bestselling novel of the same title].

So in a way she could never have imagined Wendi Deng Murdoch brought more publicity to a movie about gender inequality than a host of PR firms could have managed, catapulted the cause of women's rights into the global spotlight (the parliamentary hearing was being watched by millions around the world), and quite literally struck a resounding blow for all women -- and beleaguered husbands -- everywhere.

The Reuters report also indicates that Wendi's demonstration of toughness wasn't a fluke:

[...] The incident may illustrate how she would fight to protect what is hers and how she may play a key role in the future of the media giant, once control is handed to the next generation of Murdochs, including her two young children.

"She is great -- incredibly full of energy, incredibly intelligent, living the life and just squeezing everything out of it," he said. "She is incredibly ambitious."

The daughter of a factory director in Guangzhou, China, Deng joined News Corp's Star TV as an intern in 1996, shortly after getting her MBA from Yale. She met Murdoch in 1998 when she was a junior executive who acted as his interpreter during a business trip to China. The pair married in 1999 after Murdoch divorced his wife of 31 years.

The couple have two children, Grace and Chloe. Murdoch has four grown children, Prudence from his first marriage and Lachlan, James and Elisabeth from his second.

Lachlan has held key jobs at News Corp but now only sits on the company's board. The company recently bought Elisabeth's television production company Shine, though the deal is being contested by some shareholders, and she is expected to join News Corp's board.

James is a top News Corp executive and until the scandal undermined his position was considered most likely to succeed his father as News Corp CEO.

A few years ago, there were several news reports that she battled Murdoch's adult children to get her children a voting position in the family trust, which holds the Murdoch stake in News Corp, worth billions of dollars.
[...]
"Wendi Murdoch may be even smarter than Rupert Murdoch," said New York Daily News gossip columnist Joanna Molloy. "She is no dummy. She is a consigliere to him, she has a self interest. She is very protective of him and very involved."
[...]

Tiger Mom Wendi and her children 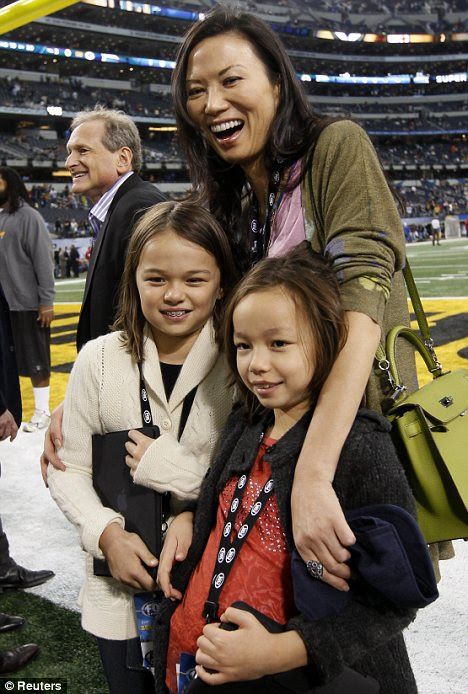