UPDATE adds photo and Boston Herald report
**************
"Day two is just day as bad as day one — we get the aftershocks every five minutes," said Basanta Adhikari, of Biratnagar, in eastern Nepal.

The magnitude-7.8 earthquake that rocked Nepal yesterday will likely be followed by a series of powerful aftershocks, experts warned, that could last weeks or months.

“The aftershocks from this will continue I’m sure, but the number and magnitude will decrease over time,” said Alan L. Kafka, associate professor of Earth and Environmental Science at Boston College. “We’re looking at something like a few magnitude-6 aftershocks, maybe one or two in the high sixes ... Once these spots light up, it takes a long time for the energy to die back down.”

“So far, we’ve recorded about 27 aftershocks over the magnitude 4.0 — one of them being a magnitude 6.6 — so we expect to see that continue over the next few weeks and months,” Bellini said.

The region has a history of damaging earthquakes. Nepal suffered its worst recorded quake in 1934. That quake measured 8.0 and all but destroyed the cities of Kathmandu, Bhaktapur and Patan. Yesterday’s quake, with the same magnitude as the one that hit San Francisco in 1906, was about 16 times more powerful than the 7.0 quake that decimated Haiti in 2010, leaving some 150,000 dead.

“Because it was such a large magnitude quake and it was relatively shallow beneath the surface and relatively close to populated areas like Kathmandu,” he said, “there has been quite a bit of extensive damage.”[END REPORT]

See also Why Nepal is so vulnerable to quakes; BBC April 25

The death toll is currently 2,000 but the number will continue to climb as aid workers make it to villages that were flattened by yesterday's quake.  Nepal's international airport was opened briefly then closed again today because of an aftershock.  As of the time the following USA TODAY report was published the airport is again open. But communications are still spotty and road conditions are very poor or roads are impassable because of yesterday's quake. From what I've read India's military seems to have done the best so far at getting aid into the country.  See the USA TODAY website for video of the relief efforts.

The Kathmandu area of Nepal was struck by a magnitude 6.7 aftershock Sunday, just a day after a massive earthquake in the region killed over 2,000 people and devastated a large  of the capital city's buildings and infrastructure.
The U.S. Geological Survey said the aftershock was very likely within a radius of 31 miles of Kathmandu. The aftershock sent people in the city running for open ground. It was not clear what damage was sustained.
The aftershock came as rescuers aided by international teams intensified their efforts on Sunday to clear rubble and search for survivors in Nepal after Saturday's magnitude 7.8 earthquake — also centered outside Kathmandu. That quake was the worst to hit the poor South Asian nation in over 80 years.
In that earlier quake, at least 721 people died in Kathmandu alone. Around 5,000 people were injured across the country and among the dead are 17 people who were struck by a quake-triggered avalanche on . Evacuations from the Earth's highest mountain were still ongoing. Tremors from the aftershock were also felt in India.
Laxmi Dhakal, an official from Nepal's Home Ministry, said Sunday that the number of casualties was expected to climb. At least 2,152 people are confirmed dead according to officials. 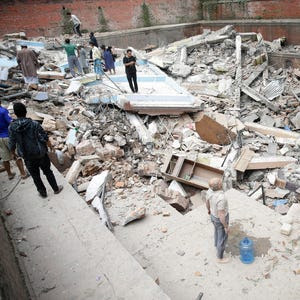 USA TODAY
5 things to know about the Nepal earthquake
City hospitals remained overwhelmed and tens of thousands of people, fearful of aftershocks bringing down more buildings, spent Saturday night outside. The  said emergency supplies were running out, as was space to store corpses.
"Day two is just day as bad as day one — we get the aftershocks every five minutes," said Basanta Adhikari, of Biratnagar, in eastern Nepal.
[...]
The world reacted quickly to the disaster, offering money, relief materials, equipment, expertise and rescue teams to the country of 28 million people that relies heavily on tourism, principally trekking and Himalayan mountain climbing.
Among the first to move in was Nepal's giant neighbor India, with which it has close political, cultural and religious ties.  planes landed Sunday with 43 tons of relief material, including tents and food, and nearly 200 rescuers.
The U.S. Mission in Nepal released an initial $1 million for immediate assistance. Australia pledged $5 million in aid. Pakistan, China, France and Britain said they would assist in the relief effort. The humanitarian aid group  said it was sending a team of technical experts from Britain to provide clean water,  and food supplies. 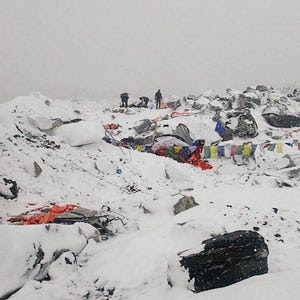 USA TODAY
Nepal quake hits already fragile tourism industry
Most areas were without power and water Sunday, but Kathmandu airport reopened briefly before closing again due to the aftershock. It has since reopened.
Rescuers were continuing to dig through the rubble of concrete, bricks, wood and iron to hunt for survivors.